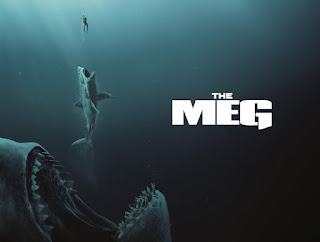 Before I get into Dragon Con mode I wanted to take a minute to review the summer blockbuster I had been dying to see. The Meg isn't being well received or reviewed, but if you're like me you don't let critics or naysayers stop you from seeing something. Let this be one of those instances if you're on the fence. If you liked Deep Blue Sea, you'll probably like The Meg. I love Deep Blue Sea, and thought The Meg was a great example of what can happen when a silly idea gets a good budget. 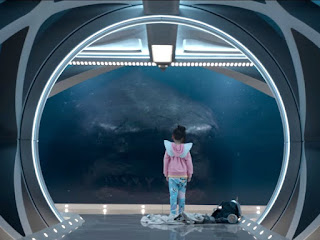 Yes, it's based on a book series I've never read so I don't care if it veers off from the original story. I like the monsters in my books to be zombies or orcs or some shit. I'm sure the books have more theoretical science than what was shown in the movie, but don't get all high and mighty about it not following the books when the premise is that an extinct prehistoric shark that couldn't possibly be alive today is eating people up like skittles. I've watched a lot of Shark Week over the years, and also have this handy thing called logic that tells me if this shark were alive then just about everything else in the ocean wouldn't be. If you're going to get all “could it be?” then we might as well turn on one of those ancient aliens shows so that we can at least enjoy Giorgio Tsoukalos' awesome hair and spray tan. Because yeah, just about anything “could” be. Is the reason my cat often throws up in the morning because he stayed up having a wild party after we fell asleep? Sure, it could be. It's much more likely that his fat ass eats too fast after not getting fed for the few hours that we actually try to rest at night, but it could be aliens too. 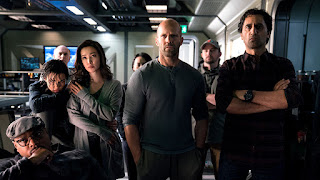 Back to the matter at hand. I was in Vegas for a conference when The Meg first opened. I knew that several of my friends wanted to see it, but threatened their lives if they went before I got home. So Sunday night the husband formerly known as Mr. Tibbs (he's decided that he doesn't like that name anymore, and won't let me use Captain Wow so he doesn't get a nickname. That'll teach him), and four other friends went to see The Meg. If, like me, you don't know or care anything about the books then you probably don't know anything other than what you've seen in the trailers. I'll be able to give you plenty of story without spoilers. There's not really much story to spoil. A research oil rig (that looks a lot like a more modern version of the one in Deep Blue Sea) is sending submersibles into the Mariana Trench because they believe the deepest depths are still unexplored. When their vehicle is attacked by something huge and that they didn't even see Hiro from Heroes, an Icelandic guy, and Jason Statham's ex-wife are trapped a few miles under the ocean. Of course, only Jason Statham can save them. He's hesitant though because the last time he dived that deep people died and he was also attacked by something huge and unknown. But it wouldn't be much of a movie if he pussied out. Along the way we meet the Asian guy who runs the place, Rainn Wilson who invested all the money, the Asian guy's daughter, the Asian guy's daughter's daughter, a heavily tattooed female engineer, the guy who knew Jason Statham when he made his last dive, the doctor who blames Statham for getting people killed, and the black guy. I don't know what his job was because really it seemed to pretty much be to tell the one liner jokes that LL Cool J did in Deep Blue Sea. Following a daring rescue (involving oceanic “gliders” that look like something straight from Naboo in the Star Wars prequels) the giant shark follows them to the surface where it proceeds to terrorize the remaining crew before heading off to the beach to snack on swimmers. There are several failed and funny attempts made to capture or kill the shark, but you know it's all going to come down to a mano y sharko stand-off between Jason Statham and a 70 foot long shark that could swallow him without even noticing.

There are some very cool visual and audio effects. If playing games like Bioshock freak you out because of the eerie stillness and claustrophobic feeling you get from being underwater then this is right up your alley. That's about the only creepy thing or scare you'll get. I read a few reviews that talked about good jump scares, but either I was giggling too hard or just don't scare very easy. I went to the bathroom very early on during an apparent plot point of the movie because when I came back everyone had already just accepted that this shark was a megalodon, and were already calling it a meg like that was normal. I know there isn't a lot of science to explain what happens in this movie, but engineers and Rainn Wilson wouldn't know what a megalodon was. Unless they also watch a lot of Shark Week; so maybe that's not far off after all. A few weeks ago I did watch a megalodon special on Shark Week because it had sneak previews of the movie in-between conjecture that “it could be”. No, it couldn't, but even Rainn Wilson references Shark Week. After Jurassic Park everyone knew all about dinosaurs so I guess it stands to reason that from Jaws to the Discovery channel people would know all about sharks too. I'm certainly an armchair expert, but I'd still rather watch monsters eat people. The Meg wouldn't be making as money as it is if it hadn't been PG-13, but when you have a 70 foot shark eating people there isn't going to be much blood. I think the shark ate more rubber and plastic swim toys than it did people really. 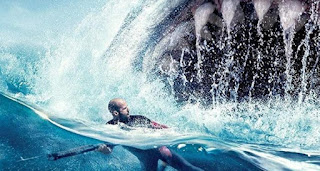 Look, this isn't a serious movie. Folks on Rotten Tomatoes and IMDB are complaining that it isn't campy enough. Sharknado and everything else SyFy does has that covered. It also isn't trying to be Jaws. If anything it's closer to Jaws 3 or 4. Big shark chases and eats people. If that's all you want then you'll be entertained. If you're looking for something intentionally terrible or shooting for greatness you'll be disappointed. I've also read complaints that they changed the ending from the book. Thank Sharknado for that guys. According to the synopsis of the book I skimmed through it ends with Statham's character, Jonas, cutting the shark open from the inside after being swallowed. That's how they ended a Sharknado movie so obviously they can't do that. Plus, I find the whole Jonas in the belly of a shark a bit too Jonah in the belly of a whale for my tastes. I'm positive that was intentional, but it still would have been stupid in an already kind of silly movie. I know I've made a lot of Deep Blue Sea references here, but it feels so similar to me that I can't help it. Bottom line: if you like fun monster movies that don't take themselves too seriously, but also don't follow the SyFy formula then you should go see The Meg. If you aren't sure then go to a cheap matinee. I'm sure this looks cooler on the big screen. If you're really not sure then at least rent it in 6 months at redbox or on demand after you've had a few drinks. You should totally go see it in the theater though because I want this movie to do well enough for a sequel. I liked The Meg so much that I scrapped my nearly finished review of the bonkers Nicholas Cage movie Mom and Dad to talk about this instead. I loved Mom and Dad, and am incredibly lazy. If I created extra work for myself by choosing to stay up late and write a new post you know it must be good. Or at least good enough for you to ignore reviews and give it a chance. It's definitely better that the Aquaman trailer that came on before The Meg. The DCU needs to stop now before they dig themselves into a hole the size of the Mariana Trench from which only Jason Statham can save them. If he's not busy making more enjoyable movies.