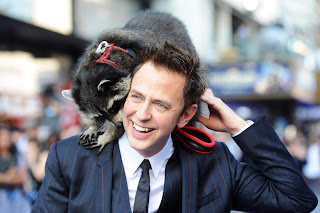 As soon as I heard about Disney firing James Gunn I messaged Dave to see if he thought the topic was too controversial for me to write about. He said to go for it, and thus the lengthy process of research and notes began. Because I'm angry, I'm confused, and I think we need to talk about this. Of course, he then proceeded to talk about James Gunn in the introduction to his most recent podcast, but whatever, I had already put too much work into this thing to toss it all out. I try to treat this site like I treat my day job. I stay away from sex, politics, and religion. Unfortunately, a lot of what led up the the scandal is politically based so I can't not bring it up. Don't worry though, I'm not not here to push an agenda on you. I don't have any answers here, and I'm not trying to start a fight, but I do think it's a discussion that needs to be had. Preferably a rational discussion. And if you're easily offended consider this fair warning. I found some of the tweets on Mike Cernovich's website, and am posting screen-caps of them here. I think people deserve to see what we're really talking about.

By now you all know that James Gunn was fired for some fairly off-color jokes he made in old tweets. He had already apologized for them, and his only mistake was not deleting them as soon as he started working for Disney. Or before he started being extremely vocal about his opposition to Trump. Either one would have been a good idea in hindsight. If you didn't know, James Gunn got his start with the highly sick and twisted Troma movie house. Even if you never saw The Toxic Avenger I'm sure you've at least heard of it. In 1996 he wrote Tromeo and Juliet which is seriously some bonkers shit. He created the hilariously messed up PG Porn, and directed Super (which was one of those movies where I wanted to take a shower after watching). Did anyone really expect that guy to not have a fucked up sense of humor? And would we even be having this conversation if he had stayed in the minor leagues doing horror and weird ass comedies? I don't think Mike Cernovich would have was wasted his time on the guy who did Slither bad mouthing the president if that was the peak of Gunn's career. But because he's now famous and very vocal about his political opinions he put a big ol' target on his back, and it was only a matter of time before someone decided to take the shot.

And since I've brought up the name we have to talk about what a waste of life Mike Cernovich truly is. He helped make “pizzagate” a thing, which nearly ruined a business and caused a shooting over completely false accusations of a child sex ring operating from a restaurant. He's now in a Twitter war with comedian Michael Ian Black over a comment he made years ago about not wanting to watch iCarly with his kid because there's no one on it he wanted to molest. While I'm not a huge fan of Michael Ian Black I am a big fan of Patton Oswalt who also seems to be moving into his scopes. Why is anyone anywhere in any trouble because of this moron? I get that Disney is a giant family oriented media monster (remember when we only had to worry about Amazon and Google taking over the world?), but a man's career is ruined for the foreseeable future because one incendiary nut job doesn't want people talking shit about the easiest president to make fun of since Jimmy Carter. I read all the tweets he posted from James Gunn, and there's nothing on there about rape (unless you're counting the kid touching jokes as rape jokes. Pick an offense douchebag) so I only see what amounts to jokes in poor taste about molestation, and most of them are kind of funny. Cernovich has also gone on record as saying that there's no such thing as date rape so his idea of what constitutes rape needs to be taken with a grain of salt.

Let us now move on to things like timing and culture. Have you watched the Eddie Murphy stand up movies Raw or Delirious lately? Or looked at the old Richard Pryor, George Carlin, Bill Hicks stuff? Is it only because they were comedians that it was okay or was it because at the time that sort of humor was okay? If you want to exclude comedians then how about NWA? They caught a lot of shit at the time they came out because of the way they talked about bitches and tricks. Did any of them get run out of show business? Dr. Dre made bagillions of dollars selling headphones, and Ice Cube went on to do kid and buddy cop movies. Was is the time or the culture that allowed what they did before to be acceptable? We've grown and evolved as a culture, but we haven't told anyone where the line is. I've heard rape jokes that I laughed my ass off at, recently too. Where is the line being drawn, and why won't anyone tell us? Because one person or group of people might get upset we're not allowed to even talk about something anymore? If I were well known (or just known) I could get in big trouble with women's groups for stuff I've said or written. I'm not going to stop speaking my mind though. We live in a pretty fucked up world, but making everyone police themselves over potential “hate speech” isn't going to make things better. Jokes are jokes, and the things you dislike weren't put out there to give you a reason to throw a protest. If people realize that many of those making the comments are just doing so to try and get a reaction then they'd see the futility of what they're doing.

All that being said: it's not that I'm mad as hell and not going to take it anymore. I'm confused as hell, and I don't know what to think anymore. Or what I'm even allowed to say anymore. Is this whole thing a hate speech in defense of pedophile jokes (for the record I think pedophiles are awful, and that the idea of considering that a sexual orientation is disgusting)? I don't know! And that's the entire problem. No one knows what's okay anymore, and we've gone so far off the rails that by trying to include everyone and everything that you're pissing someone off no matter what you say. If Disney were to go back into the histories of everyone that's ever had anything to do with one of their movies (or even founded the company) something objectionable would be unearthed for a large number of them. Kudos to the stars that have stuck up for James Gunn though. Selma Blair quit Twitter (not like that helps anything, but still nice of her), Chris Pratt threw some bible verses in their faces, and Dave Buatista went fucking off. Did James Gunn make a mistake? Yes, and he apologized for it a long time ago. Disney has made the bigger mistake though by proving that they won't stand behind someone who admits fault, and wants to move on and grow as a person. By all accounts he's a lovely human being. Mike Cernovich said that “to beat a person, you lower his or her social status...”. That's exactly what he did to James Gunn. Way to let the bad guy win Disney.