Help - I Married a Freak! 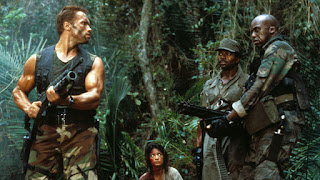 Well not a literal freak like in the movies Freaks or Freaked (it's really tough to find good images from that movie), but he's certainly an oddity. How else do you explain a man who hates Predator, Jaws, and Alien? I guess I should have asked a few more questions before we got married, but while we were dating we watched (often shitty) horror movies and MST3K. It was only years later that I found out how many things I love that he can't stand. I probably would have married him anyway, but I might have looked around harder before settling in. Taken individually his dislikes might not seem so bad, but once I sat down with him and compiled a full list it certainly made me wonder what the hell I was thinking.


In an article I wrote 4 years ago “Dating Guide for the Nerdy Guy” I talked a bit about the things Mr. Tibbs and I do (and don't) have in common with geekdom. It probably doesn't matter as much what he's nerdy for as much as it matters that he's nerdy for something. But is Predator really a nerd thing? It might be because of how much I love it, but I never thought it was until now. So here are a few things that Mr. Tibbs hates, and why, and why he's completely wrong about them. I guess this is just more of an article about awesome things I love, but maybe people will start yelling at him rather than me for just a little while. 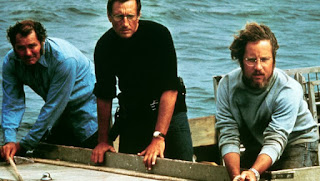 Jaws – he finds it boring, silly, and hates the main actors. It might drag a little in the beginning, but if you're only looking at it as an action movie then you're missing half the story. No it's not a Sharknado, but it wasn't trying to be a horror movie (even if it kind of is). It's really man versus his own fear, man versus nature, and even man versus man. Chief Brody's fears are our fears. The ocean is a scary place where we don't belong. Quint is a scary man who you shouldn't be trapped on a boat with. Maybe there's too much story for him. I know Mr. Tibbs loves Deep Blue Sea (how can you not?) so it might not be enough action for him. I've never sat him down and made him watch the 3rd Jaws though. Perhaps the over the top 80's-ness of it will win him over.

Predator – he loves Cobra, but not Predator?!? Billy getting his spine ripped out is one of the most iconic action movie scenes ever for me. If I just hear a clicking sound out in the wild I automatically look up into the trees, and not for woodpeckers. If the overly storied Jaws gets you down then Predator should be the cure. Fuck story, an alien is hunting Arnold Schwarzenegger and Carl “Action Jackson” Weathers in the jungle. What's not to love? He told me he hated this one even before the iffy Alien vs. Predator movies (or Predators) came out, but then he also loves Delta Force. The human mind is a weird thing. At least his mind is. 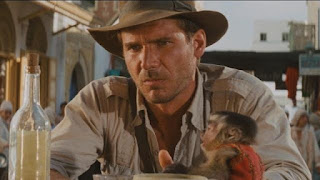 Indiana Jones – every one of them. While I can agree with Kingdom of the Crystal Skull, and maybe parts of the Temple of Doom I cannot understand how he hates this series so much. His reasoning is something to do with what a bad archaeologist Jones is, and that he simply destroys everything he says he's trying to preserve. Sure he might break a few things here and there, but it's just a damn action movie. Okay he does really tear some shit up, but who is my husband to say whether or not those were important historical sites in the first place? I probably shouldn't ask him how he feels about the Tomb Raider games...

Alien(s) – I'm not even talking about 3, Resurrection, or the new movies. He loves horror, and unnerving art like the H.R. Giger designs. He does have this thing about Sigourney Weaver, but that shouldn't make take a whole franchise of creepy monsters off the table. The first movie especially is one of my favorite horror/sci-fi movies of all time. For me it's right up there with The Thing (which he loves) so I just can't understand where the line is being drawn. If you look at the IMDB page for Alien it shows “people who liked this also liked” Indiana Jones. Is my husband basing his least favorite movies on an internet database? 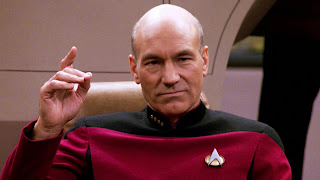 Those are just the top insults to my taste in movies. I could go on and on, but for the sake of time I'll just skim over the fact that he also doesn't like James Bond movies, Jurassic Park, Doctor Who, Star Trek (he likes Star Wars, but not as much as I do. It was cute the other night when he tried to tell me about things from the EU he just learned that most of us have known for years), and is terrified of Muppets. I know that Muppets don't really fit with the action/sci-fi/horror theme of the rest of this list, but I just think it's bizarre and worth mentioning. When I asked him how he felt about Tremors he simply said “meh” so I could really go off on a tear of 1,000 words or more on that alone. He likes The Terminator, but he got tired of trying to engage me in discussions about technology where my only answer was Skynet. With all the twisted timelines it's become self-aware so often that we've all been living on borrowed time since 1997 anyway.

So how do you live with someone who thinks your favorite movies are stupid crap? Carefully. We even disagree on which Joss Whedon series is the best. I love Buffy, but Firefly speaks to my sci-fi soul most often. Well, we try to compromise by watching the things we do have in common together mostly (mostly). We both love horror movies (the worse the better), disaster movies, and he does at least enjoy Starship Troopers. So if I want to watch any one of those other movies while he's not around it's fine. I certainly don't sit still for his Saved By the Bell/90210/Gilmore Girls crap. He saw a 50 Shades of Grey movie with my girl friends, and I'm going to see The Meg with the boys. Holy shit you guys. I think I'm the dude in this relationship. Oh wait, I did spend last Saturday morning in a park dancing to a Kate Bush song. Whew. I was worried for a minute. And since he'll probably read the post that he knows I'm writing about him - it's just jokes baby. Still, Predator?!? 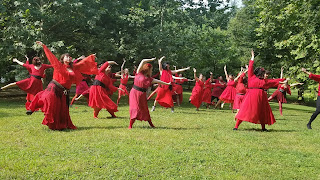