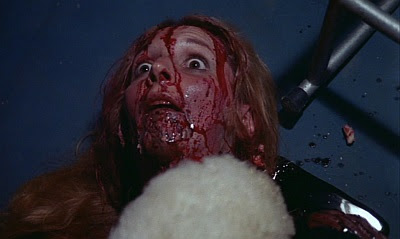 Nature goes on a rampage in this edition of Devlin's Domain. There are plenty of films out there where animals attack. You can watch Leslie Nielsen fight a bear in the silly, yet entertaining, Day of the Animals. You can roll your eyes or laugh your ass off to the atrocious catastrophe that is Birdemic. There are films with killer rats, killer slugs, killer gators, killer spiders, killer sheep, and killer fish, but this notorious Italian filmmaker tops them all. Feast your eyes.


Franco Prosperi was one of the directors responsible for the highly controversial Mondo cinema. He has been dubbed the Godfather of Mondo, which is a shockumentary style of filmmaking. These films were exploitation documentaries that covered a variety of taboo subjects and often depicted graphic violence and nudity. They sometimes incorporated staged events into their documentaries or, in the case of Addio Zio Tom, staged an entire documentary (faux documentary). He's most famous for Mondo Cane and it's sequel, but was also responsible for Women of the World and Africa Addio.

After several years on hiatus from that grueling film style, Franco returned to add a Mondo touch to the popular "nature strikes back" horror genre. This subgenre has a ton of films under its label that are centered around a specific type of animal or even plants. You've got Dogs, Grizzly, Deadly Bees, and even killer bunnies in Night of the Lepus. Franco took another approach with his film and set it at a city zoo, which meant multiple species were available to assault their human captors. What would be the catalyst to ignite this bestial rampage though? Well, drugs of course. Drugs were pretty popular in the 80s but even though, as they say, "cocaine's a hell of a drug", it wasn't quite enough to justify the savage storm he would unleash upon the city. So he went to the extreme and chose to dope these animals on PCP. Yes, zoo animals on angel dust is what this movie is about. Hell yes!

This film has been advertised by some as "the most shocking film of his career", but I totally disagree with that. I've seen some of the shit this guy has done and this doesn't really come close. Of course you may have a different opinion if you are really into animals, as there are some questionable methods used in this film. The over the top narrative of the film keeps things from feeling too real, which cushions the shock of some of the animal sequences. The first time I saw this I couldn't believe what I was seeing, which is how I felt during his other films and why I appreciate them so much. As shocking as it is I think it is ironically his tamest film. This is...

You're serenaded during the opening of the film by a saxophone as the camera tours the city streets and the drug element is immediately introduced. Used syringes are piled up all throughout the subway station and the next shot is a fountain of frothy water above the train station and advertisements for the zoo. The first inmate we see is a hungry tiger who paces as the zookeepers chop real horseheads in half for his dinner. This scene could be an immediate turnoff for the more squeamish viewers, as it is obviously real horse heads being split lengthwise with their lifeless tongues flopping around as they are tossed to the wild cats like irrelevant matter. 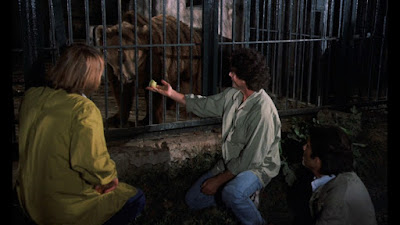 The two main characters are introduced after the feeding. You have the zookeeper, Rupert, played by John Aldrich. His leading lady is a journalist, Laura, played by Lorraine De Selle of Cannibal Ferox and House On The Edge Of The Park fame. They converse briefly with a blind man and his Seeing Eye dog, which you know will be relevant later. They let you know that the water in the zoo is about to cause some problems. Plenty of zoom shots of the Seeing Eye dog and several zoo animals drinking. One of the tigers starts getting cranky and Richard Aldrich was brave enough to shoot a scene where he tranquilizes it with an injection. He actually does quite a few risky scenes involving animals that could potentially destroy him. 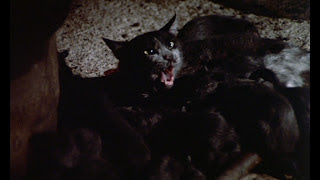 Laura's preteen daughter is introduced in an awkward scene where she's lying in bed in her underwear and an open shirt while her mother tries calling her. There's very brief nudity that seems entirely unnecessary, especially considering the age of the girl. Prosperi was not one to shy away from showing nudity of any age though. Even though this seemed unnecessary it was still tame compared to his other work. Shortly after this scene the animal attacks begin. The first victims are a couple who are trying to have sex in their car when they hear a cat screaming. It's a pretty shocking sight as a stray cat is trying to fight off a pack of crazed rats that are chewing it to pieces. They soon turn their attention toward the young couple who are mauled to death. in their car. 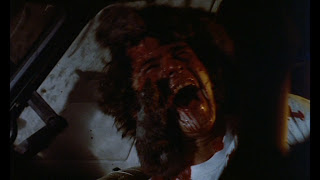 A crew arrives to clean up the horrific aftermath. They blast the rodents with torches and fire hoses while others pulled the mangled, half eaten corpses out of the vehicle. Real rats were harmed in the making of this film. Simultaneously the night crew at the zoo is alerted by strange behavior in the wild cats' area. As they go to investigate they find themselves the victim of an ambush by the lions, tigers, and cheetahs that have escaped. There are some pretty impressive shots of the zookeepers trying to fight off multiple lions and cheetahs and ultimately being eaten as a pack of lions fight over their share. Of course, as expected, the poor blind man meets his fate in a touching scene where his Seeing Eye dog rips hunks of flesh from his body to some serene music. 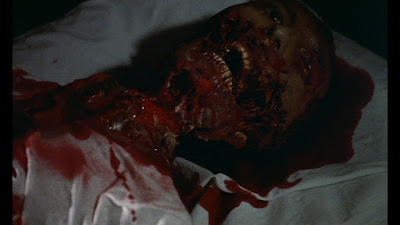 All hell breaks loose throughout the city as a stampede of elephants plows through the streets running cars into buildings. They even strangle a guy with their trunk and crush a woman's head under foot. While chaos reigns on the city, Rupert tests the saliva of some of the crazed rats to try to find the cause of their violent actions. He's notified of the multiple animal attacks as the emergency services are lit up with multiple phone calls. Rupert drives around to see if he can spot any of his animals and sees a woman driving irrationally in one of my favorite scenes. A doped up cheetah had spotted the woman while marching through the streets at night and started hauling ass after her car. One of the most memorable lines in the movie from Rupert, "she's not crazy, she's being chased by a cheetah!" 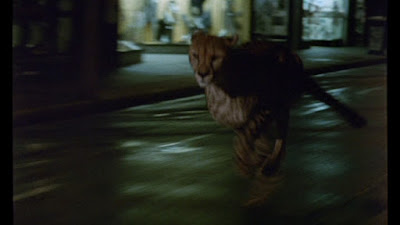 People in the city continue to be caught up in the animal rampage. Elephants invade an airport runway, Laura's daughter's ballet class is invaded by a polar bear, a tiger crashes into a subway train, and local pigs and cattle are even attacked by lions and hyenas in a vicious scene that seemed more real than the filmmakers admit. As this madness goes down Rupert scrambles to find the cause of all of this and finds that somehow a shit ton of PCP had gotten into the water supply. Of course you know, it's not only animals that drink from that water supply. Things then go into a different direction. 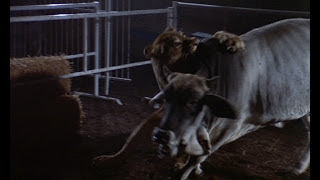 The most shocking thing about this film is the use of animals throughout the movie. Many movies in this subgenre rely on animatronics or having things take place off screen. You usually see very little of the animal antagonists in these films. But Prosperi has these wild beasts featured prominently throughout his movie in scenes that seem incredibly difficult to film. The imagery is so stunning that I didn't even notice how bad the acting/dubbing was the first time. I start noticing things like that after more viewings and the shock factor subsides. It could just be the dubbing that makes the acting seem so bad. The characters and story aren't all that great either. It's really all about the animals, for better or worse. Whether you agree with their tactics or not, you have to be impressed at how well they managed to stage these violent scenes. According to them the animals were not mistreated, except for the rats they cooked alive with a blow torch. 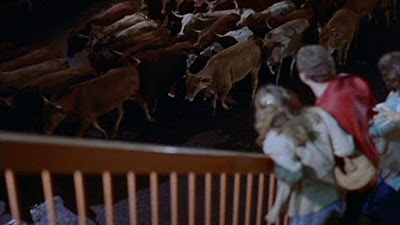 I was pretty into this film when I first came across it and would've given it an 8 out of 10 back then. I've lost some enthusiasm for it after further viewings, but it's still a fun film with a ridiculous premise. It currently has an IMDB score of 5.5, but I'll give it a 7.5. It's not perfect, but's certainly memorable and rewatchable. That's all for this edition of Devlin's Domain, but check out the next edition to see what kind of bonkers film I'll come up with next.

bout Me: I have a couple of different aliases, but for this column I will use my middle name. I am Devlin and I currently reside in Atlanta, GA. 35 years of age and still feeling immortal. Former Rockstar, current Pro Wrestler and hell, I'm still a Rockstar at heart. I got my first taste of obscure cinema when I was about 8 years old. My Dad would take us to the video store every weekend to stock up on classic horror films to watch on his projector. They were mostly harmless, PG-rated horror films like the great Universal monster movies. Then one night he rented a movie for himself to watch after we had gone to bed. I was so intrigued by this film that I wasn't allowed to see. I begged and begged and he eventually caved. That night I was exposed to a film unlike anything I had seen before. Ever since that night I wanted to find more films that gave me that same sensation. I wanted to feel shock and disgust. I found my place in the Horror aisle. The film I watched was Faces of Death. Thanks Dad.