What I Did for Spring Break - Universal Orlando Part 2 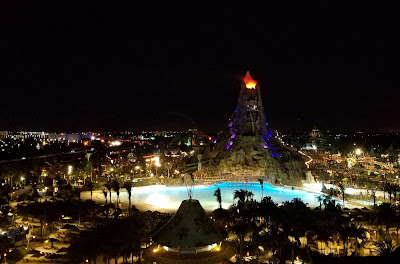 The Troublemakers visited the Universal theme parks in Orlando for an early Spring Break a few weeks ago. My son had never been and it had been around thirteen years since me and the missus were there. Obviously a lot had changed in the intervening years.

Now Universal’s side of Orlando boasts two Harry Potter themed areas, a new King Kong ride, new resort hotels, and plenty more to fill an entire trip. There’s even a whole new water park called Volcano Bay, which I’ll address in just a bit. Once upon a time I wouldn’t have dreamed of a vacation in the area that didn’t include Walt Disney World, but it looked like Universal had stepped up their game enough to earn a few solid days of our time.

We had more fun than not and I’m satisfied with our decision to just visit Universal. Barring a weekend for Halloween Horror Nights I can’t imagine going back in the next several years, but I definitely feel better about the parks than I did after our last visit.

Here are a few more of the highs and lows of our trip!

Opened in 2014, Universal’s on-site Cabana Bay Beach Resort is very similar to Disney’s themed resort hotels. It’s much nicer than the budget hotels – Pop Century and Art of Animation – where we normally stay, but probably not as nice as their mid-levels, though I’m not sure because I’ve never stayed anywhere but the budget places.

The theme of Cabana Bay is a 50s and 60s style and it is executed very nicely. The hotel and attached facilities are full of modern amenities, but the décor and vibe is decidedly mid-20th century. As soon as we set foot on the grounds we all just felt like we were in a fun place and – most importantly – on vacation away from the world.

I had selected a room on the Volcano side and I can’t recommend this enough. Every night we were rewarded with a view of Volcano Bay’s gorgeously lit volcano. Every morning we woke up to the imposing sight of that same volcano lit by the sun. It was worth every penny to experience that each day.

I have to take a moment here to talk about the shower.

I’m 6’4”. Very rarely do I stay in a hotel with what I feel is an adequate shower situation. Apparently most hotel showers were designed for people around 5’7”, so I have to bend and struggle and contort in order to wash anything above my chest. Cabana Bay has what I considered to be huge glass-doored showers with shower heads mounted high on the wall. It’s my favorite shower that I’ve ever been in and if I had the money I’d have one put in my home immediately. Some might lament the lack of bathtub, but I am neither a woman nor a four year old child so baths are irrelevant to me.

The Cabana Bay staff were tremendous. Every person I encountered during our stay was pleasant and helpful, clearly looking to provide the best possible service. It’s been a long time since I’ve experienced customer service as wonderful as what this resort provided. It certainly didn’t happen during our last Pop Century stay.

Actually, I’ll go ahead and say that overall Universal’s staff – resorts and theme parks – wiped the floor with Disney as far as general pleasantness and customer service went. If I was basing my judgments purely on that we’d be Universal 4 Life.

I didn’t visit the pools, but my wife and son did and reported that they’re awesome. In walking by them on visits to the lobby and various stores I can confirm that they look great and that if swimming in a pool were part of my vacation desires I would’ve been thrilled to visit.

As far as convenience, Universal City Walk – the access port for Studios and Islands of Adventure – is right around a mile or a few minutes shuttle away. Keep in mind we visited just prior to peak times, but we never waited more than ten minutes for a bus. Usually not even five. And Volcano Bay is right outside the door.

Prior to our vacation everyone I talked to had hyped Cabana Bay up to the point where it couldn’t possibly live up to my expectations. Not only did the resort and staff do that, they surpassed them. Everything about the hotel was near perfection. I’m not saying you’re going to get pampered like some fancy-pants hotel you see in the movies, but if you want a place that’s fun, comfortable, and central to Universal, this is your spot. 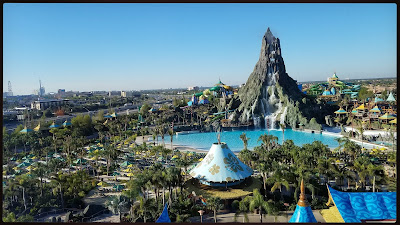 Universal’s brand new water park is located right next door to Cabana Bay. I mean, you could almost fall out of bed into their wave pool. It provides a beautiful view if you’re facing it, but if you’ve got kids and don’t see the point of visiting a water park on your vacation it presents problems.

Here’s my deal – we live in Atlanta. White Water (a local water park) is less than an hour away. We barely ever go to White Water. We all like the idea of water parks, but once we’re there we realize that there really isn’t that much we enjoy doing and everything is a hassle and we just spent a bunch of money for not much fun and then it starts raining and they close all the rides which doesn’t even make sense because WE’RE ALREADY WET.

Anyway, I don’t like water parks that much in the first place and we don’t even visit the one here. So I really hate it when actual theme parks with rides and stuff have water parks. This is not a positive feature for me because it means I am going to have to explain to my son why we’re not going to the water park he wants to visit.

As he’s gotten older he’s gotten more practical about this and seems to understand the idea that we’re spending a shit-ton of money on theme park fun and that a water park – no matter how magnificently its central attraction glows – is not a good use of our time. In general I try to take a “whatever you guys want to do” approach, but I stand firm on this one. 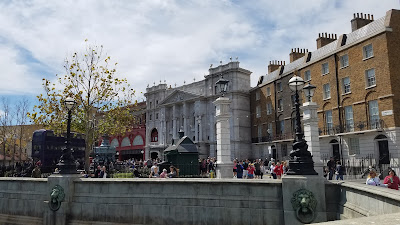 Sort of like Cabana Bay, many people told us we had to ride Hogwarts Express. But nobody really described it or said why.

I am going to tell you that you have to ride Hogwarts Express and I am not going to describe it or say why. But I will say this just to make sure you don’t skip it like we almost did: 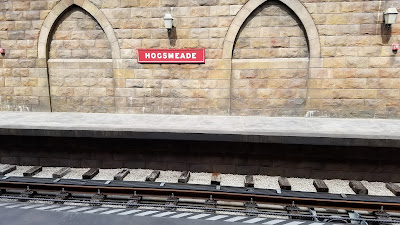 Hogwarts Express is NOT like your local amusement park train. I thought it was going to be like the Six Flags Over Georgia train ride, just themed differently and with a fancier queue.
THIS IS NOT THE CASE.

END OF SORT OF SPOILERS

This is a must-ride part of the Wizarding World of Harry Potter. I’d even go so far as to say you shouldn’t set foot in the actual areas without boarding Hogwarts Express from King’s Cross station in Universal Studios. It’s so much more magical than just walking into Diagon Alley or Hogsmeade. I think we would’ve enjoyed our time in the Wizarding Worlds even more if we had started there. And I suppose since I’ve brought them up, I’ll go ahead with a fourth entry for today: 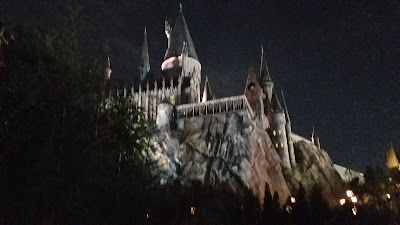 The Wizarding Worlds of Harry Potter

Hogsmeade and Diagon Alley are as immersive and meticulously executed as anything Walt Disney World offers, probably more so. Here are my pieces of advice for your visit:

*They won’t take up a whole day of your vacation (yet – they are adding more as we speak), but you should plan on having plenty of time to explore and have fun, especially if you have kids. Don’t think you’ll get the best experience by just dipping in for a couple of hours and then returning to Studios or Islands of Adventure. I wish we’d had this advice prior to our visit.

*If you have kids, buy the interactive wands. You can either purchase them prior to the trip – which we did – at Ollivander’s when you get there, or at pretty much any of the gift shops in the parks. I can’t speak to the on-site wand selecting experience, but I can’t imagine it’s really worth your time.

*Prepare your kids (or yourselves) for the learning curve involved in using the interactive wands and be ready to spend some time on the various elements they activate. Don’t think you’re going to just cast some spells and get on with your day. But once you do get the hang of it, it’s fairly easy. 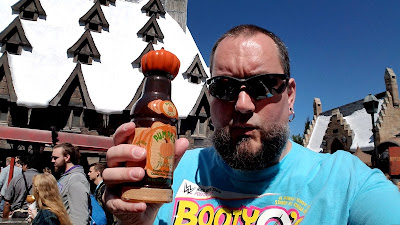 *Try the Pumpkin Juice. Everyone raves about Butterbeer, but  none of us particularly liked it. If I could put some Captain Morgan Black Spiced rum in some Butterbeer, that’d probably be super, but as is we found it oddly sweet and bland. But Pumpkin Juice is the bomb dot com. If it didn’t cost six or seven bucks a bottle (I can’t remember and I will never look back at all of my receipts for this vacation) I could’ve downed that stuff all day. And it would also go great with rum. Everything goes great with rum. 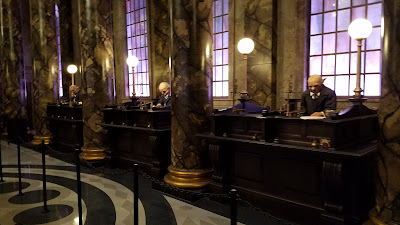 *Escape from Gringott’s is amazing and well worth your time. The queue alone is breathtaking, but the ride is tremendous and really puts you in the world.

*I was not allowed to ride the Forbidden Journey. An attendant took one look at me in the seat and told me I was too tall for it and gave me no opportunity to adjust my position or anything. Phantom, Jr. wasn’t going to ride it alone, so he had to get off, too. I was furious. The attendant was a good bit too curt for my taste, as well.

Another attendant did her best to make nice and gave us several Express Passes. Phantom, Jr. and his mom used two to go right back on the ride. She said it wasn’t that great, but as I waited for them I had to hear every other person that rode it – including some folks that were way larger than me – gush as though they had been touched by an angel. A very exciting angel.

We didn’t get to use the rest of the Express Passes because it was late in the day and we didn’t realize they were only good for that day. I’m still pretty annoyed about that one.
*Otherwise I can’t say enough positive things about the Wizarding portions of Universal’s parks. They’re amazingly immersive, immaculately detailed, and have an atmosphere as magical as any theme park I’ve been to. Every inch is meant to provide an escape from our Muggle world.

Those were the next few things that popped in my head today, but there’s so much more to discuss with these awesome parks. Stay tuned to Needless Things for future installments of my 2018 Spring Break story!