It sure is a good spring for movies. While I missed out on Strangers: Prey at Night (or maybe not missed if the reviews are anything to judge by), I did get to see Ready Player One and A Quiet Place. There's also Super Troopers 2 (I know it won't be as good as the original, but I still want to see it), and Infinity War coming up. I'm sure I'll see Rampage at some point too, but as much as I love disaster and monster movies it didn't look like one I needed to see in the theater. But today I'm mainly hear to talk about A Quiet Place. 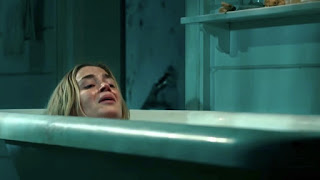 After the overwhelming spectacle of Ready Player One I was in the mood for something different and creepy. Not only is this creepy, but it's a very different kind of horror movie. You've probably already heard about how little dialogue there is in this movie. That in itself makes in pretty different. But not only is it low on the talking, it's pretty generally low on any sound at all. If you haven't seen it yet I'll try to keep this spoiler free. So if you don't already know here's the basics: monsters that rely strictly on their hearing are wiping out the human race. A family with a deaf daughter (which conveniently allows for the whole family to communicate through sign language) is surviving on their farm by making as little noise as possible to hide from the 3 monsters they know to be in their vicinity. After the family encounters tragedy on their way home from a scavenging trip we jump ahead a year to see that the mother is about to give birth. I can't imagine why anyone would want to bring a baby into a world where you get eaten for making noise, but I guess life has to go on. The daughter is bravely trying to overcome her guilt over inadvertently causing the tragedy, and her deteriorating relationship with her father. The son is traumatized as well, and since he's younger than the daughter is naturally frightened of his father's attempts to teach him how to take care of himself in this terrifying world. The rest of the movie is this plucky family just trying to survive, and sometimes just barely doing so. You'll notice that I don't call any of them by name, and that's simply because we aren't given any names. There's no interaction with people outside of their home so no one calls each other by name. You don't even know that the characters have names until the end credits.

Besides the occasional screams of death and terror most of the sound in this movie comes from the music. Sometimes too much so. When your movie is almost completely free of sound dramatic music kicking in can be a little jarring, and even a subdued score seems like too much at times. Needless to say if you see it in the theater you will hear every sniffling, coughing, and popcorn crunching person around you. You could even hear explosions and music from whatever movie was being shown in the theater next to us. I almost think I would have liked it better at home. While it's not a bad looking movie, there wasn't anything so visually spectacular that would require you to see it on the big screen. If you have a decent sized TV you could watch it with your lights out and get the same effect with far more control over the ambient noise. 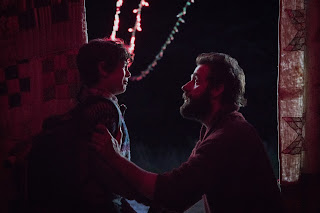 While the monsters aren't the most amazing looking things I've ever seen they do look good, and work well. The way their heads open up to amplify the sounds they're seeking is particularly cool. The rural farm setting is unnerving in it's unfamiliarity (since most of us didn't grow up on farms I would assume this to be true for a lot of people), and in it's modifications to allow the family to live mostly underneath their home. You can see the signal fires of other survivors in the distance, but we never meet any of those people so it's a very desolate feeling world as well. There are a few requisite jump scares, but the majority of the movie conveys a pretty strong feeling of relentless tension. It's so quiet that whenever someone or something does make a noise you feel your shoulders bunch up while you wait for the monster attack that you know is coming.

This is not a movie for people who like to talk while they watch something (thankfully there were none of those people in the theater we were at). Nor is it a movie for people who need to know such things as what the monsters are, how they got here, and how the entire world fell apart so quickly. I read on IMDB that there's a newspaper clipping in the father's radio room that says something about a meteor hitting the earth, but I missed that little tidbit. In the end, none of those things matter anyway because however it happened all the family can do is deal with what's left to them and try to live. 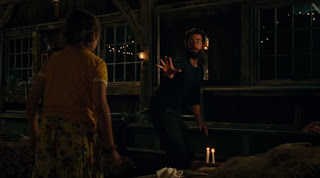 With summer blockbuster season and it's many action movies quickly approaching you may also not see any better acting than this for a long time. Unless you go in for big budget dramas. I don't so this will probably hold true for me at least. It's really impressive how much emotion and depth the actors can portray without saying a word. John Krasinski is better than I've ever seen here (I haven't really seen him in much outside of The Office though), and Emily Blunt is also wonderful. Maybe it's because they don't speak, but the child actors are also far less annoying than I usually find them.

While there are no epic CGI battles, cocky smugglers in outer space, or superhero teams to battle for the fate of the world there is something unique and exciting about A Quiet Place. I'll be seeing all of those other kinds of movies soon enough, but for now it was nice to see something different and I'm always satisfied when a horror movie can do something new.