Once again social media has improved my ability to bring you pictures of the new stuff shown at Toy Fair. Most toy companies maintain some sort of presence on Instagram or their own blogs online and seem to recognize the importance of showing their new products directly to potential consumers. I don’t know if this means the collectors’ market is more important than ever or if it’s simply evolving business, but whatever the reason I’m glad it’s happened.

As always I highly recommend you follow Action Figure Attack on Facebook and Instagram for some excellent press photos. Toy Ark once again provided thorough coverage and is the site we used for reference to record this Friday’s Toy Fair episode of the Needless Things Podcast. For the full list of links to Toy Ark product pages, click here!

It is time again to gaze in wonder upon the magic and marvels that the toy world will be unleashing upon us over the next year or so. That’s right, Phantomaniacs - the New York International Toy Fair happened last weekend, and I am ready to deliver the highlights of the show!

Reveals didn’t seem to start as early this year, but once they started they stayed strong all weekend long. Rather than one standout, I had several contenders for most impressive company this year. There’s very little in the way of innovation, but mixing classic licenses with vintage styles seemed to be quite the fad.

Read on to see some of my favorites from the show and of course, listen to this Friday’s episode of the Needless Things Podcast to hear me, Ryan, Jay, and Josh discuss all of the hottest reveals!

This year, rather than doing a huge mega-post I’m going to dole out bite-size posts focusing on small groups or individual companies. You guys all know by now that Mezco's One:12 Collective is my favorite current toy line, so let's just dive in!

I’d be lying if I said I was excited for Mezco’s announcements this year. It’s not that their stuff wasn’t impressive, it’s just that we pretty much know now that it’s going to be at least a couple of years before the new One:12 figures shown actually hit retail.

I still fully support Mezco taking as long as they need to get these figures right, but that delay definitely sucks some of the buzz out of any product announcements. 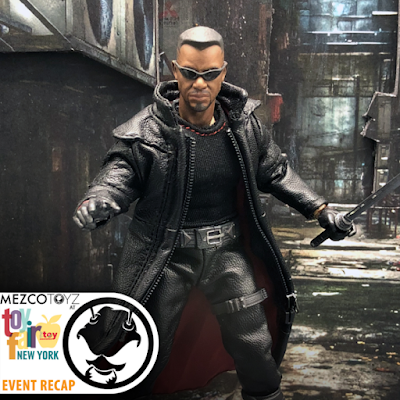 I thought that this was a Wesley Snipes movie Blade at first, but apparently it isn’t. Either way it looks great and will be a welcome addition to my One:12 shelves. Now all we need is a Marvel Dracula, complete with mustache… 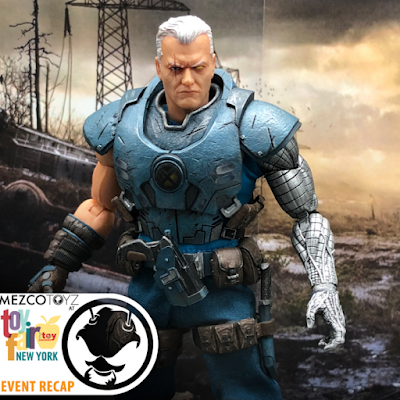 This guy is one of Marvel’s best badasses in my mind. At a time when Wolverine was starting to feel a little stale, Nathan Summers came along and redefined “mysterious loner”. I imagine there will be some extra heads with this version or one of the inevitable others, but I’m glad to see a fully human face. There’s been too much of the Terminator-face Cable lately. 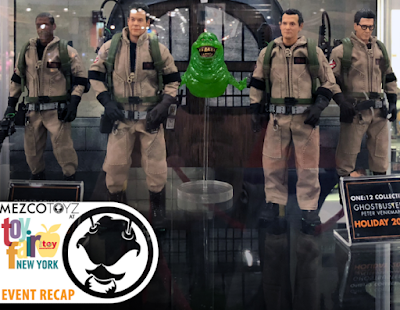 Diamond Select’s Ghostbusters seemed like they were going to give me what I wanted, what with great likenesses and (seemingly) amazing build-a-dioramas along the lines of something I had suggested Mattel do years ago. In the end, though, once I had them I just wasn’t happy. There were small design problems and the rooftop diorama wasn’t actually sturdy enough for the figures to stand on. Not that they could stand anyway.

I don’t want to bag on DST’s releases because they really did do a mostly good job, but I need great Ghostbusters. Mezco’s will probably be great, but I just don’t know that I want to pay what it will cost to get them. Plus, I doubt we’ll see anything beyond the four guys.

Also, they still don’t have the tubes on their coveralls. 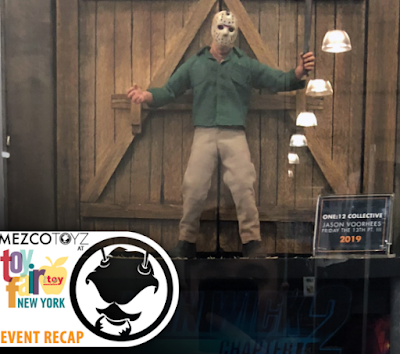 Looks good but needs work. The shirt has that “doll clothes” look. I’m not sold on any of the One:12 horror releases as being essential yet – I’m perfectly happy with NECA’s products. 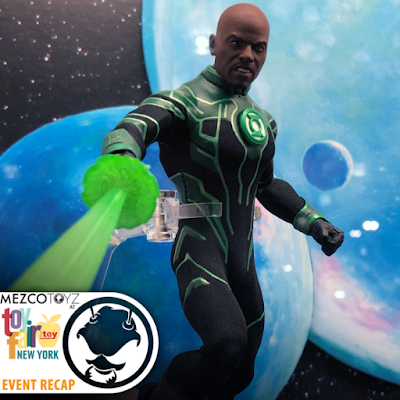 Finally! Someone that recognizes the value and cultural relevance of John Stewart! To many, he is Green Lantern, thanks to the Justice League cartoons.

There’s been some controversy in the Phantom Zone over the look Mezco chose for his suit, but I like it. I realize to some it may evoke unpleasant memories of the Green Lantern movie, but I think it’s a cool look. Plus, we all know there will be some sort of variants; most likely a classic look from Previews and some sort of ultimate set loaded with constructs from Mezco. That’s my guess, anyway. 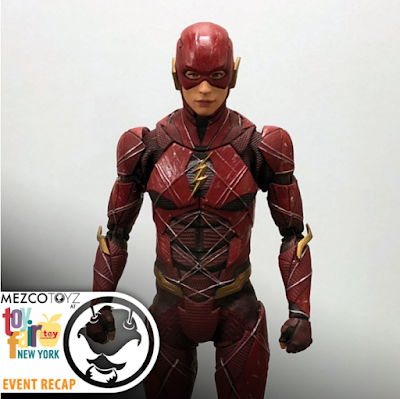 As far as toys go, this costume design has definitely grown on me. I still think it’s a hideous look in both theory and execution as far as actual Flash costumes, but it’s made for some really cool-looking toys. I don’t imagine I’ll buy any of these beyond Batman and Wonder Woman because I’m perfectly happy with Mattel’s versions(!), but Mezco did a great job here. 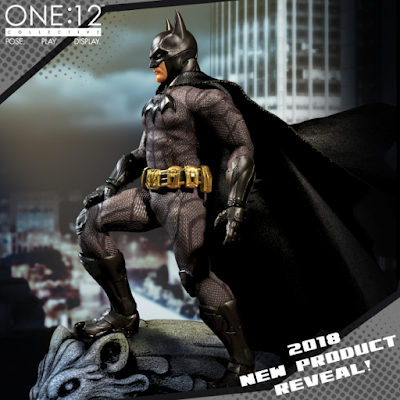 The above picture was the first one I saw and it made me positive I would buy this Batman, which is the second in a trilogy of figures that started with the Ascending Knight Batman (which I didn’t care for).

This one looks like a blend of elements from the New 52 and the Arkham games, which is fine by me. Then I saw this picture: 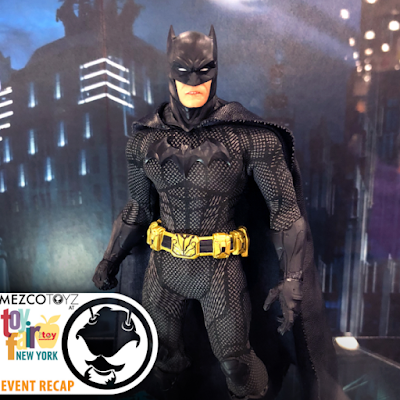 I don’t know if it’s the lighting or what, but that suit looks terrible. It's obviously the same suit, but in this image the mesh texture is way over the top and the colors have far too much contrast. This one needs more work, for sure. For now my “default” One:12 style Batman will be the Justice League movie version. 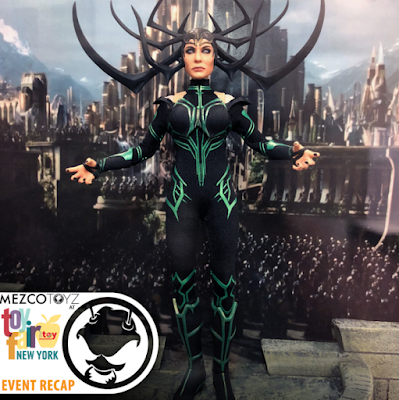 I have my issues with Thor: Ragnarok – possibly to be discussed on an upcoming Needless Things Podcast – but I absolutely adored Cate Blanchett as Hela. I’ve been waiting for Hot Toys to announce an alternate, “uncrowned” head for their release and it hasn’t happened yet. If it does, I’ll get that one. As of now the product listing only promises “additional bonus accessories”, whatever that means.

If, however, Mezco gives us the alternate head and manages to beat Hot Toys’ release date (currently scheduled for 4th quarter 2018), I’ll go with theirs. 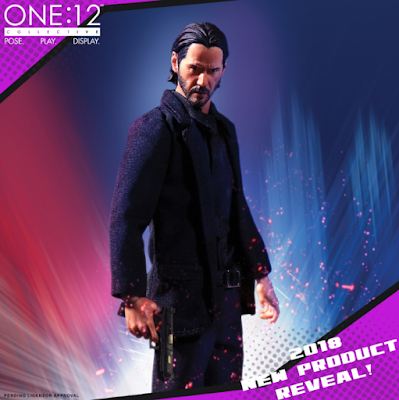 I watched John Wick 2 a couple of weeks ago and was left wondering why we don’t have any John Wick action figures. Little did I know one was in the works from the company making the best action figures available today.

We already know Mezco can do suits in this scale thanks to their Joker, so I can’t wait to see what kind of ultimate arsenal variant they’re going to put out to accompany this awesome figure. 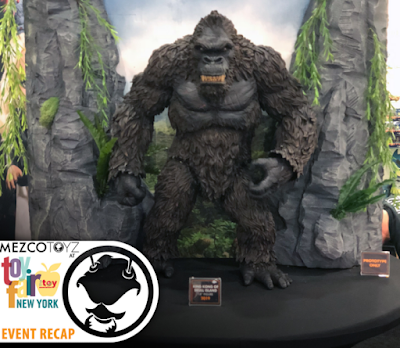 I never saw confirmation on which version of Kong this is supposed to be and I’m not the guy that can just recognize it and tell you. Whichever ape it is, it looks great. I love the fury on his face and the slight exaggeration of the sculpt. Mezco is releasing 7” and 18” versions and depending on the price I’m sure I’ll be tempted by the 18” version.

That's all I've got for now! I'm sure there's plenty of news that I didn't come across over the weekend or neglected to cover, so be sure to check out last week's Needless Things Podcast for even more Toy Fair goodness!