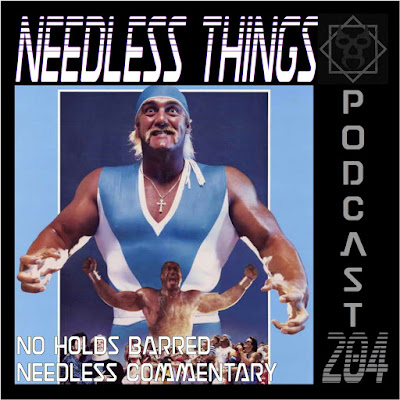 Part of an ongoing series – the Needless Things Irregulars gather in the Phantom Zone to provide their own unique commentary on classic genre films!


We’re on the road to WrestleMania, Phantomaniacs! That means this month’s Commentary had to be related to the warriors that inhabit the squared circle. After a serious rumble in the Needless Things Podcast Facebook Group No Holds Barred was crowned champion!

1989 brought us Batman, Indiana Jones and the Last Crusade, Gremlins 2, UHF, and countless other classics, so it’s a little hard to believe that this - Hulk Hogan’s first starring role - was produced the same year. Nonetheless, the Commentary Team gathered to endure the cocaine-tinged madness of a lawless world where television networks rule the world and the only place to find justice is in the ring!

Listen in as the Team attempts to make chicken salad out of chicken shit with 1989’s No Holds Barred!