You don’t have five hundred bucks to spend on a friggin’ toy.

And even if you did, you certainly don’t have anywhere to put a four foot long, seventeen inch high, fifteen inch wide, fourteen pound mass of plastic and paint.

If you’re not on board with the Khetanna (the in-canon name for Jabba’s Sail Barge), there’s probably nothing I can do to convince you that purchasing this – the largest Star Wars toy ever produced by Hasbro – is anything other than completely bonkers. It’s a ton of money, it’s huge, and it’s not part of what Hasbro has been pushing as their main collector line for the past several years.

Obviously I speak of the Black Series, which is the six inch scale line of figures (and a few vehicles) that collectors gleefully abandoned the classic 3.75” scale for due to many reasons that are probably suitable for an entire podcast episode.

The Khetanna is part of the Vintage Collection – that glorious 3.75” scale line that I’ve been collecting basically since I was one year old. The scale that allows for all of the vehicles and playsets that the galaxy far, far away presented and demands. Or at least, it did until the toy industry started chugging downhill even more rapidly around ten years ago. Production prices shot up, kids stopped wanting toys, and dozens of evergreen movie franchises with annual releases dominated licensing and toy production, putting an end to the slow roll out of beloved and obscure characters that dominated most of my toy collecting life.

Also suitable for a podcast, that one is.

I’m in the third – and longest – cycle of collecting Star Wars right now. The first was the original Kenner toy line. I loved it, but as I’ve related many times it was replaced by GI Joe: A Real American Hero. The second was Kenner’s revival in 1995, which continued until around 2002 when Attack of the Clones came out. While I never stopped completely after that, I did sell of a huge amount of that stuff years later to pay for car repairs or something.
The third started in 2007 with the thirtieth anniversary style of figures and has continued through today. I could get deeper into that, but again – this is not the time or place.

What this is the time for is a look at Jabba’s Sail Barge and my reasons why anyone who might be even remotely interested in such a thing should buy it. I know I’m not going to convince many – if any – but I have to. Because this massive, incredible toy is essentially the culmination of forty years of collecting Star Wars toys.

Let’s start with its pedigree. The Khetanna is following in the footsteps of two of the greatest toys ever made – Hasbro’s “Big” Millennium Falcon and “Big” AT-AT. The former is my favorite toy I own or ever have owned. The latter isn’t as beloved by me, but is technically an even better toy given all of the action features and the competence of the execution. 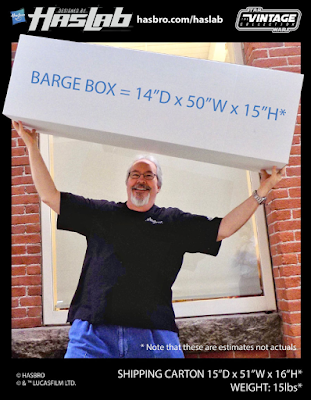 The lead designer for this amazing toy is none other than Mark Boudreaux, who has been designing Star Wars toys since the beginning and has worked on every 3.75” scale Millennium Falcon ever made, including that wonderful BMF. He knows his stuff and has a deep devotion to both Star Wars and toys.

The Khetanna is that most magical of toy combos – a vehicle and a playset. Depicting one of the most important and memorable locales from the Original Trilogy, this massive toy has a full deck, sails, interior chambers, and all kinds of detailing and goodies inside. Like the Big AT-AT before it, it features a command bay/cockpit/whatever that almost has too much detail (a ridiculous concept): 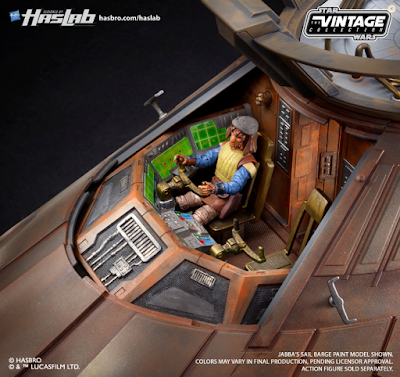 This is an incredible plastic landscape that will be able to display a huge number of your figures. Never mind having a shelf for it, it is a shelf. This is the sort of diorama/background that we as toy fans dream of.

Think about it – this is where a diminutive diplomat from the peaceful planet of Alderaan valiantly assassinated the galaxy’s most notorious criminal overlord. From a certain point of view this could be seen as the most significant event of the entire Star Wars saga. Sure, the demise of the Jedi Order and the death of Palpatine were big, but if you look at the continuity and the context, Jabba technically had far more power and influence than either of those entities. That fat, crafty slug was running the game while Sheev was still washing his dresses on Naboo.

What I’m saying is that this playset is absolutely essential.

“But wait, Dave,” you might be thinking, “As we all know, every great playset has a jail cell. But I don’t remember Jabba’s barge having a jail cell.” 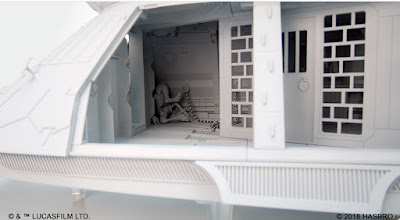 Not only that, it includes two exclusive figures. One of them is a no-brainer – Jabba the Hutt himself. This is an all-new sculpt of the vile intergalactic gangster made especially to interact with this vessel. 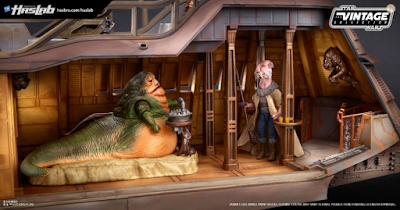 The other is an addition to the Vintage/30th Anniversary style that we’ve been wanting for years now – Yak Face! 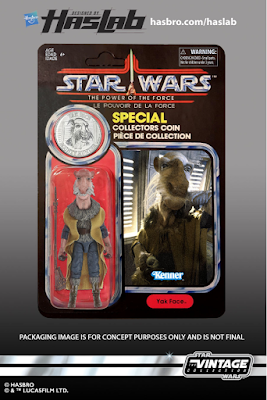 It’s interesting to note that his card says “Yak Face” in true vintage style rather than his EU name Saelt-Marae. Yak Face was one of Jabba’s trusted – as trusted as criminals can be (and he’s respected in his hood like a G) – lieutenants or informants or whatever. In new canon he might be a shoe salesman. We may never know. If the Disney-era books don’t improve I’ll certainly never find out.

So it’s time to bottom line this thing.

For $499.99 (plus tax) you get this massive vehicle the likes of which may never be produced again. You get the two figures, Jabba and Yak Face. Oh, and this price includes the shipping. That’s bonkers because this thing is going to cost probably around a hundred bucks to ship some places and at least forty for others. So add that value in, as well.

More than all of that, you’re showing your support for HasLab, which to me is the most exciting idea in the history of modern toys.

I skipped over it until now, but the whole reason the Khetanna is even a possibility is Hasbro’s daring new venture that will produce specialty, collector-demanded items based on a Kickstarter model. Don’t; think of it like MattyCollector, where you were obligated to buy things sight unseen. With HasLab, they will be sharing every product every step of the way and you’ll know exactly what you’re getting.

HasLab could potentially be a source for all of the weird and obscure characters that no longer make it to retail. And not just from Star Wars, but from every property that Hasbro produces – Transformers, Marvel, and even GI Joe.

I’m not usually a fan of “Support this thing if you want to see more things” tactic, but I feel like Hasbro is completely in the right on this one. Retailers haven’t been interested in this category of big box toy in years. And now that Toys R Us is going away, there’s even less of a venue for this sort of item. If Hasbro discovers that there is a market for direct-to-consumer products, we could reap the rewards for years to come. 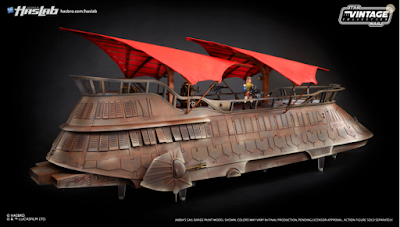 Maybe this appeals to you. Maybe it doesn’t. But either way, at least go to the HasLab site and check out the amazingly in-depth production diaries they have. If nothing else, they’re providing a fascinating and somewhat unprecedented look into the Hasbro toy process.