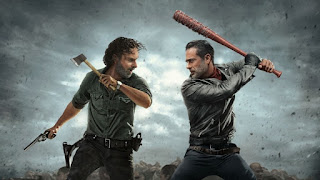 Am I just a glutton for punishment? Kinda, but here's the deal. Mr. Tibbs and I lived in the dark ages of TV until last month. We didn't have a DVR. We're crazy, but we just don't watch enough TV to have ever made it important to us. Then we talked to the cable company to get a better deal. Not only did we get a better deal, but we got a free DVR. Shortly after this I heard that the kid who plays Coral on The Walking Dead had been bitten in the mid-season finale, and would die when the show came back. I hadn't seen a single episode of season 8, but Coral dying sounded like something to watch. Especially since I now had the power to fast forward through commercials and speeches. That power came at a high price though. If you care at all there are spoilers ahead. Let's be honest though – no one really cares. Not even me, and I'm watching it again.


As in: for fuck's sake, how long does it take someone to turn? The mid-season opener was an hour and 20 minutes long, and Coral didn't die until the very end. Not only that, but we didn't even get to see him finally shuffle off his mortal coil. Granted, I didn't know what was going on or see all of the events that led up to his heroic demise, but still. To play it safe the night of the premier I recorded the previous episode in case that somehow would make his death better or more understandable. It didn't. Thank god for fast forward. Tyreese took an hour to turn, and it was may more interesting to watch (mostly because his turning looked like a bad acid trip, but I could get down with that. Not having one, but watching someone else have one mind you). I think they drug this episode out as a farewell to a character that we've been watching for eight years. Let's keep it real though – I don't know too many people who are still watching anymore. The people who needed almost an hour and a half to say goodbye to Coral are probably the same people who wear those “if Daryl dies we riot” shirts. I remember when I last felt hopeful (or at least not cheated and angry about this show). It was here in 2016, and it's obvious that even then I was on my way out. 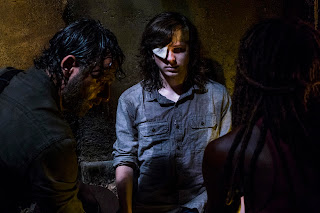 Even when I'm not fast forwarding I'm not really paying attention now (I usually read while it's on, and I promise you that whatever crappy fantasy novel I'm reading from Kindle Unlimited is better than this shit). I don't know why I didn't quit after I'd seen Coral finally die. I guess I was hoping for something to happen, but all I got was crying, and revenge plans. Hey Rick, remind me how well all of your revenge plans have gone in the past. Do the producers know that they've lost the original audience, and feel like no one will notice if they keep doing the same shit over and over again? When Rick got done crying (again) he went nuts (again), and seemed on a clear path to kill Negan. The main reason I kept watching was because Negan seemed genuinely upset about Coral dying, and Rick was the one acting insane in the membrane. It would have been so interesting if Negan had become the good guy and Rick made a real heel turn. And if something could be interesting it won't happen on this show. Instead they have a flaming baseball bat showdown in a room full of zombies from which Negan escapes. Oh, and Negan and his crew dunked their weapons in zombie guts. I can't remember that far back very well, but I remember the guy at the CDC saying that everyone was infected. This explains why the recently dead will rise, but I don't feel like I ever got a good explanation as to why a bite kills someone. If they're already infected why would a zombie bite kill them? Maybe I missed (or forgot) this so if you know please tell me. It does at least make for a good battle, and aftermath. Since the Hilltop, the Kingdom, and Alexandria have all kind of combined there are way too many mouths to feed. And too many characters to keep up with. Thanks for thinning the herd of living people at least. I'd be mad about the tiger dying if the CGI hadn't gone from okay to terrible. 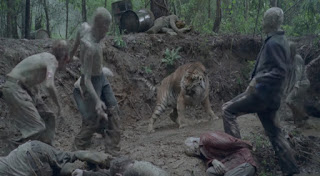 And it gets more ridiculous from there. The trash people who have forgotten how to use prepositions turn out to be led by a garbage artist and get wiped out by Negan Junior, or Simon as he's really called. And in a move I still don't understand Rick and Michonne show up only to abandon her to a zombie horde of her former friends. Granted I didn't see anything leading up to this dick move, but it still seems pretty harsh. An old lady in a pantsuit shows up and gives Maggie “the big book of medieval technology” so that they can make lumber, and windmills, and shit. Half the episode is dedicated to it, while Rick is off having his bro-down with Negan. In a world without zombies that might be a pretty handy book, but these people are a LONG way away from a world without zombies so I guess somebody just hang on to that for 50 years or so. Maggie's grand-kids will have bitchin lumberyards unless she gets them all killed first. She's as kill crazy as Rick lately, and everyone paid the price except for her. I guess she still has an up on them because of her husband getting his head crushed in front of her and all. Is she not over that yet? It happened last season for fucks sake. Get over it!

At one point I thought that show was coming back on, and discovered I'd been tricked into a commercial for Fear the Walking Dead. It seems as though fan favorite Morgan is going to make his way over to a new show that no one watches. I thought both shows began in the same timeline so I don't know how that works. They both start at the beginning of the zombie apocalypse, and Fear is way behind in years, but I never got through the first season so I have no idea if they sped things up or whatever. I really don't care either way. Morgan isn't going to keep me watching The Walking Dead nor is he going to make me want to watch Fear the Walking Dead. As long as I have this DVR I'll speed watch some Walking Dead. I won't ever be invested in much that happens again, but it's been losing steam for a few years now. The end has to be coming soon. I would prefer it if they all get killed by another group who thinks they're evil (because they kind of are now), but as long as no one lives happily ever after I'll be satisfied. Sort of.... 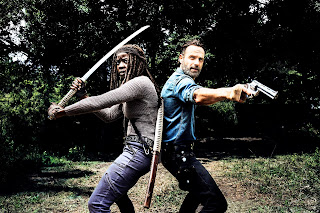