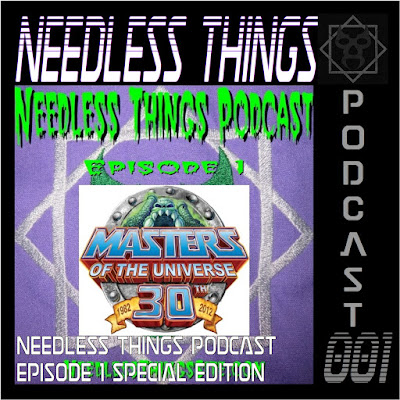 The first episode of the Needless Things Podcast was posted on January 1st, 2013. It's a conversation between Phantom Troublemaker (Dave) and Beau Brown about the 30th anniversary of Masters of the Universe.

It was originally posted on the Internet Archive because we had no idea what we were doing. Now, five years later, the episode has been given a new introduction and outro and is finally being included in the Podbean library of episodes to be distributed to itunes, Stitcher, Uranus, and everywhere else podcasts aren't sold.


Here are the show noted from that first episode in a cleaner form.

Phantom wrote much longer show notes than Dave does.

I guess this was bound to happen sooner or later. I knew at some point I would have to do my own thing.

This was actually Beau’s idea. He messaged me that he wanted to do a Masters of the Universe podcast; possibly Earth Station Eternia. I thought that sounded like a great idea, so I ran it past Director Faber. He was not interested. I immediately knew I was just going to have to do it myself. I envisioned a year-end wrap-up of the Masters of the Universe Classics toy line and the 30th Anniversary. I got back to Beau to make sure he was down with that – he was – and started figuring out how the heck I was going to do it.

Would there be cursing? (yes)

How long did I want to record? (preferably about 90 minutes, but however long it took)

How would I record? (with a Skype add-on called Amolto Call Recorder)

How would I post it? (still working on that as of this writing)

We had a recording date set of December 10th, but I got sick and couldn’t talk around the pound of snot hanging out in my throat.

And then we did record ten days later. I had planned on doing a lot more than we did, but it just takes a while to discuss thirty-two action figures and the greatest playset of all time.

Here’s the rundown, with links to reviews where appropriate (at the time of the recording I had not yet received my December shipment of Procrustus and Mosquitor; I skipped Granamyr):

I had a fantastic time recording this thing with Beau and even enjoyed the editing to a certain extent. If the editing had been the only thing going on in my life I think I would have really liked it. Of course, that would also be very sad.

I wasn’t sure to what extent Director Faber wanted the ESO Network to be involved given his initial level of interest, but he was pretty excited about making The Needless Things Podcast a part of his empire when I talked to him Sunday night during the latest Earth Station Who recording. He asked if I had included the ESO IDs and I went, “Uhh… no,” because I don’t have those IDs and the idea of me including them never came up. But he sent them along and now they’re in there and I can’t help but feel like this thing is even more official. Faber told me if I waited two weeks I could actually upload it to the ESO Network, but I’ve had this date in mind and thought it was really important to kick off 2013 with something big. I may re-upload it when he’s ready just so everything will be in one place.

Speaking of big things, I also bought a domain name. You might (or might not) have noticed that your address bar says “NeedlessThingsSite.com” rather than “phantomtroublemaker.blogspot.com”. I’ve been feeling like that needed to happen for a while. I was never really happy with the address, but when I investigated I found out that “NeedlessThings.com” was already taken by some kind of fashion site that as far as I can tell has never been updated and seems to not even be in use.
I haven’t really investigated the differences between the pure Blogspot site and whatever it is I have now, but apparently there are some. As the year goes on I’ll change whatever I can when there’s time. We’ll see.

One last thing – this is more of a general type of thing than anything podcast-related, but just know that I’m toning down my costumes this year. The mask will still be everywhere I am, but I’ve decided to work with what I already have, costume-wise. I’m really trying to tighten up the spending and get rid of a few nagging debts, so this year is going to have a minimum of unnecessary expenses. I had wanted very badly to have a Phantom Troublemaker version of Doctor Six’s costume for TimeGate, but the time and money for such a thing simply aren’t there. I’m still gonna hug Colin Baker, though.

Oh, and toys do not count as “unnecessary expenses”. So don’t worry about a lack of reviews.

Listen in as Phantom and Beau discuss the 2012 Masters of the Universe Classics toy line!