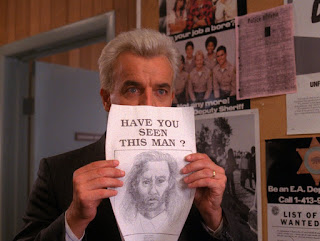 You know him, you love him, you might even be a little unnerved by him. It's Ray Wise! But don't let the fact that he's played a bunch of bad guys fool you you. He was insanely nice during his panel, when we stopped by to say hello at his table after the panel, and again when we went on Saturday for Mr. Tibbs to get an autograph and picture with him. 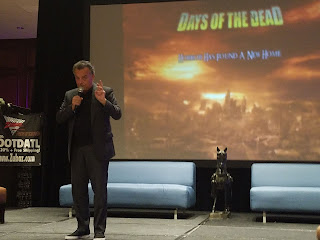 I still suck at using Audacity. Mr. Tibbs says it's easy, Dave says it's easy, one of you jerks will also probably tell me it's easy. Well, it's not easy for me dammit! I've got this fancy new recorder, and I'm still figuring out how to work all of the settings too. I thought it might be easier to just transcribe the panel, but after an hour of listen/type, rinse, and repeat I was only 20 minutes into the audio. You also wouldn't get to hear Ray Wise doing a great David Lynch impression if I typed it all out. Seriously, his impression is only second to Miguel Ferrer in Twin Peaks (I miss that guy). Well a mediocre recording is better than spending 6 hours transcribing so here goes. I did at least find an audio host that allowed me to upload larger files so it's not broken down into a ton of parts this time. There is a very short second part though because just when we thought the panel was over Ray Wise stopped to tell a quick anecdote about Angelo Badalamenti. I had to hit record again fast for that. So while this may seem like a short post you've got almost 45 minutes of audio to listen to. Audio where he talks about Twin Peaks, Robocop, Swamp Thing, and a whole lot more.

And since the internet still hates me, and I can't get audio to stream you can just click here for the first part, and then click here for the short Angelo Badalmenti story. Hopefully this all works. If not there's some more ways to listen below. I swear I'm trying to get better at this, but I don't get paid enough round here to go shelling out for web hosting. Also, Blogger doesn't let me see if the audio is working correctly before a post goes live. That part I really can't fix. Anyway, enjoy!