Look I know that we're almost a month out from Days of the Dead now, but we've got nothing else to do for a few months so why not keep this party going for another week? And I'm not just trying to drag this out with a bunch of crap either. I'm giving you audio of a Malcolm McDowell before I finally lay this thing to rest. Pun intended. 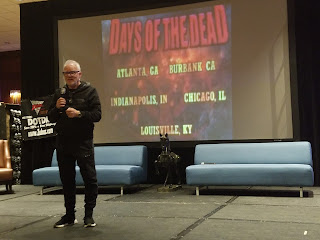 If you ever look at IMDB you'll probably notice that Malcolm McDowell has 261 acting credits. I have friends who never look at IMDB, but I have the app and use it constantly. I look stuff up before, during, and after I watch a movie or show. I like the trivia and tidbits, and the fact that searching for Ashton Kutcher doesn't leave a douchey stain on my google search history. In my defense for looking him up in the first place: my father constantly refers to movies or actors that I don't know, and that he can't remember the names of once he's brought them up. That particular time it turned out that he was talking about Dude, Where's My Car. I've never seen it so I obviously had to look it up to see what his "and then?" joke meant. And while that clears up my defense, it does nothing for the defense of my father's taste in movies. He smokes a lot of weed though so this probably excuses him from a lot of things that don't make sense. 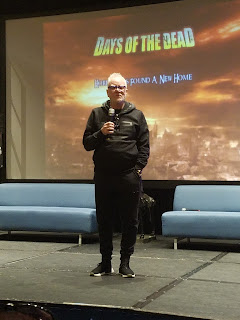 The point of all of this rambling is that if you look at Malcolm McDowell's IMBD page you'll see a pretty impressive list of credits. A Clockwork Orange, Cat People, Time After Time, Caligula, awful Halloween remakes. After scrolling through the movie, TV, and video game credits you work your way down to the "trivia" section to see all of the parts he was "considered for". Meaning they were probably parts he turned down. The one question that no one asked during this Q&A panel was "when was the last time someone asked you to audition for something, and how did you react?". Mr. Tibbs only brought that question up to me and Sharron after we filed out of the room. I think it's a pretty damn good question, and I wish he'd had the nerve to ask it. But when a man like that tells you that he's going to make fun of you if you ask a stupid question you tend to doubt yourself. Well, you'll hear for yourself how long it takes him to get the audience warmed up after a warning like that.

So listen, and enjoy the angry (and yet hilarious) tirades of a man who is at least twice as old as a few of us combined, and yet still has a 9 year old son.

I'm still working with Audacity so let me know if this is better of worse than the Ray Wise panel from last week. After you listen to something 100 times while you're editing it becomes tough to judge the quality of certain effects. 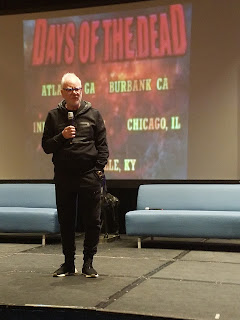 And since blogger is still somehow trying to slowly drive me insane by not letting me embed a player into the post here's a link to soundcloud because it doesn't hate me...yet.

I'll be back in 2 weeks with something not Days of the Dead related. I did watch Carl die on The Walking Dead last night, and some bad stuff went down on Star Wars Rebels recently. I don't think I'm ready to talk about either one yet. Mostly because I can't believe it took Carl and hour and twenty minutes to die on a show that I don't even really care about anymore, and because Rebels is almost over and I want to see how else our hearts might be broken before I get into that mess.