Beth's Days of the Dead Recap

You should all know by now that I love horror movies, and spooky stuff in general. Several years ago Sharron and I got day passes to go to Days of the Dead just for Saturday. It was fairly small, inexpensive, and relatively quiet. I had a good enough time that I’ve been wanting to do it again. Since my horror buddy was out of town the last few times it happened, and Mr. Tibbs isn’t usually one for crowds, I haven’t been back until this year. It’s changed a lot since 2014, and it was all for the better.


There wasn’t anything wrong with it the last time I was there, but it’s grown quite a bit since those days. We pretty much only went the first time because The Thing is one of our favorite horror movies of all time, and they were having a panel with some of the stars. We spent the day wandering around, enjoying the costumes, and buying stuff we really didn’t need. It was fun, but things wrapped up early in the evening, and I’m used to nightlife at conventions. Well, they have that now. 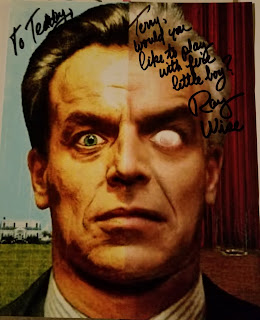 Mr. Tibbs would have never forgiven me if we'd missed the Ray Wise panel so we left in plenty of time to get down to the Sheraton and get situated before the 7pm panel. The nice thing about having a convention that takes place on one floor of one hotel is that you get the lay of the land pretty easily. The not nice thing was that the low temperatures that weekend were in the 20's. Followed a week later with highs in the upper 60's. Welcome to winter in Atlanta. Dragon Con training made it fairly simple to navigate the sky-bridges so we only had to go about a block out in the elements. The other great thing is how much fun it is to go through all those Dragon Con host hotels when they're completely empty. We passed maybe 2 business jerks in between Peachtree Center and the Hilton, and we were cosy and warm. Hooray!

Once at the Sheraton we quickly found everything we needed to find. Remember back in my Days of the Dead preparation post I said how you might have to run around to make back to back panels? Well, that turns out not to be the case at all. There were 2 tracks. Everything with the big stars happened in the "black track" room, and the "blue track" room was across the hall. The "blue track" had to more risque things happening (a burlesque show, the Dirty Dirty Con Con Game Game Show Show, etc) so Ray Wise, Malcolm McDowell, Ralph Macchio, and everyone else was in the same room. They didn't even make you clear out in between panels so you could conceivably sit in one room all day and let the celebrities come to you.

After we got our passes and figured out where we were going we ran into the DDCCGGSS crew, and found that because the room was smaller than we were used to my help would probably not be needed after all. As it was only 6 o'clock by this point we had plenty of time to wander around before getting our seats for Ray Wise. The vendor and famous people rooms were well spaced, but it was a little odd that some stars were in the vendor room. Were they bigger stars who got special treatment? Did they run out of space in the other room? I honestly don't know. What I do know is that I walked past Shawn Michaels' table like 10 times over the course of the weekend and never saw him once. Where was he? There was another room for photo ops, but I didn't pay for any of those so if that's where he was then more power to him for raking in the big bucks. I assumed that having a panel at 7pm Ray Wise wouldn't be anywhere near his table on Friday night. I had told Mr. Tibbs to leave the picture he wanted signed at home so he wasn't lugging it around all night for no reason. Turns out I was wrong. Ray Wise was at his table before and immediately after his panel. I'll be posting a recap of that panel next week so check back soon. After his panel we went through the main rooms again, and stopped by to talk to Ray Wise for a minute so we could make sure he would indeed by there all weekend. I knew I'd be in big trouble with Mr. Tibbs if he didn't get that Leland Palmer/Bob picture signed. He was so ridiculously nice that I was worried we were going to creep him out. So I dragged Mr. Tibbs away before things got weird, and we stepped to the bar for a little relaxing time. While we were sitting there Malcolm McDowell entered the bar, and went to a table towards the back by himself. Even Tara Reid had 2 handlers when we saw her at the Sheraton bar in 2014. Malcolm was all alone, but I've heard that he's viciously sarcastic, and was afraid to approach him during his downtime. I also thought that I'd have to buy him a drink to break the ice, and assumed that he probably only drinks really expensive scotch. I'm way too poor for that kind of schmoozing. Days of the Dead also didn't really give me any ground rules about what press could and could not do. Dragon Con takes that stuff pretty seriously, and you can get the boot if you're not careful. I decided to err on the side of caution, and just glance over a few times to see what he was doing. He was just chillin on his phone like a normal person, and I guess I should be used to seeing famous people being normal humans by now, but I'm not. It was only 9 o'clock by this point, but we didn't have anything else planned so we went to see if we could be of any help for the DDCCGGSS. I have no skill whatsoever at hanging posters, but I did the best I could. I'm not sure what was up with the air in the "blue track" room, but it was unbearably hot in there all weekend. Between the heat, the running around, and the return of the run down feeling from my fight with the flu I had to call it a night early. Sounds like the game show crew had a good time after the show, and partied so hearty that I'm glad I called it a night when I did. I'm trying to learn my limits. 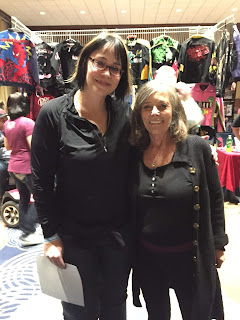 The next day we were back for more, and were trying to get down there by noon so we could get our second day passes, and meet up with Sharron who was joining us for the day. Thanks to MARTA running on a single track all weekend we had to wait 20 minutes for a train, and by the time we got there we'd missed the Ralph Macchio, Martin Kove, and William Zabka panel. We were in plenty of time to see Malcolm McDowell though, and his was the big panel for us on Saturday. He was great, and I'll have a recap of that one soon as well. Keep checking back my friends. The only other thing I really wanted to do was see Elzig and The Casket Creatures, but they weren't starting until 10pm so we had a lot of time to kill. After a leisurely lunch we wandered around the hotel some more. We discovered that there was a fraternity convention happening one the second floor of the hotel, and that was a weird mix. So we met some young republicans in and around the bar which was less weird than I thought it would be. They seemed nice enough in a future business leaders of America kind of way. We tried to sit in on Dave's Toy Stories panel, but the heat chased us out once again. Seemed like a good panel even for those of us who don't have a room filled to bursting with toys. Mr. Tibbs ran out of steam so we sent him on home while Sharron and I continued to mill around and run into friends. During dinner at Meehan's (the best part of going to a convention downtown) Jay came over to tell us that Schweck was at the Sheraton, and ready to party. As I've said before, Schweck is the guy you want to be around at a convention. If there's a party, he'll find it. If there isn't a party, he'll create one. Unfortunately, he's not the person to be around if you want to remain relatively sober. We had to call it quits before the party was through. After having the flu all week, and running around in the cold Friday night and all day Saturday I just didn't have the stamina to stay down there until midnight. We certainly gave it our best though. 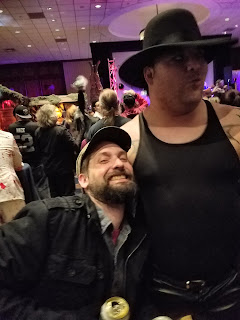 Days of the Dead isn't huge yet, but it is changing, and they are certainly adding and to what they already have. I heard Mattew Lillard and Ernie Hudson were super cool, and wish I'd seen them. So it's small, but you'll still miss some stuff if you want to run around hanging out with friends. I really like where it's at now, but will be interested to see how it grows. I for one like a convention where "I'll be right there" means I'll see that person in 5 minutes rather than the half hour to 45 minutes it might mean at a larger convention. So if you haven't been (or haven't been lately) you should give Days of the Dead a shot. It's not expensive, it's not overwhelmingly huge, and if you like horror it might be just the thing you need to chase away the winter blues. Get a room down there though. You'll be hauling coats, gloves, hats, and a bunch of other crap around all weekend if you don't.