10 Reviews in 5 Sentences Each 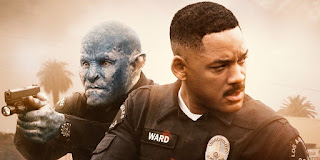 Another Christmas, and another several nights spent watching movies with my brother. He not only has Netflix, Hulu, and Amazon Prime, but also torrent sites that Mr. Tibbs and I are afraid to use. Yep, as much as we love movies and free things we’re total pussies. We’re old enough to remember Napster, and when people started getting in trouble for illegal downloads. This year he stayed for 5 days so you know we watched a lot of stuff. Much of it was pretty good, and not all of it was movies, but there really wasn’t anything I wanted to spend 1,000 words on individually. Okay maybe the new Star Wars, but that's old ground to cover at this point. So if you liked 13 Movie Reviews in 5 Sentences Each you'll love this. Or you'll hate it. Up to you really.


Red Dwarf – Season 12
If you’ve never seen it, you don’t want to start at the end (unless you’re starting at the episode titled The End). This is supposed to be the final season. It’s sad if it is, but it was a great send off to a show that has kept me entertained for 30 years. It’s funnier than season 11, and some old characters return too. If you’re a fan it’s worth buying to watch it all wrap up. 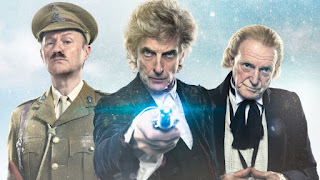 The Doctor Who Christmas Special
Sorry Peter Capaldi, but I didn’t like you well enough to get choked up at your departure episode. Nowhere near the feeling I had for Tennant or even Smith when I come to look back. I won’t miss your sonic sunglasses, but I have missed David Bradley as the first Doctor. Since we won’t get any more John Hurt as the Doctor let’s keep doing that as long as we have Bradley around. I keep expecting Arya Stark to sneak up and kill him though.

Baby Driver
Is it me or is it weird to hear Kevin Spacey calling a young man “baby” for 2 hours now? It probably wasn’t creepy until recently. I liked it, but I didn’t love it like everyone else seems to have. I couldn’t really connect with the main character. If I have to look at a guy for that long then I want to feel something for him. 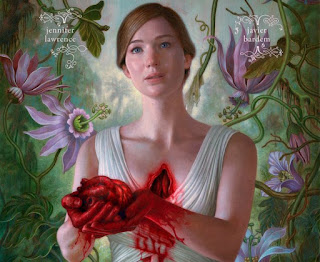 Mother!
This was the most confusing movie I saw all year. We only watched to the end because we thought there would be some kind of payoff. There wasn’t. It was just what felt like hours of my life spent wondering what the fuck was going on, and ending with anger at what the fuck I just saw. Don’t waste your time or money.

What Happened to Monday
Very strange, unique concept, but very enjoyable. Noomi Rapace does a great job of portraying seven different characters with very distinct personalities. I love future dystopias, and one with Willem Dafoe is even more disturbing. Glenn Close is kind of starting to look like a man. If you can look past that you’ll likely enjoy it.

Bright
I don’t understand why people hate this so much. It was like a gritty real-life World of Warcraft, and I enjoyed that about it. I do wonder how much they had to pay Will Smith to say “fuck” that many times – I  bet it was a lot. The opening credits tell you what you need to know about the world it takes place in (hint: not subtlety veiled commentary on racism). If you make it past that you’re probably good to go. 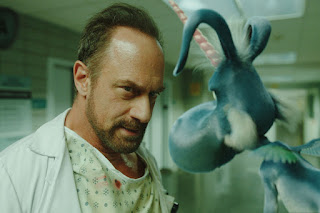 Happy!
I tried, but this was a little too gritty and raw for me. At least this one earns it’s exclamation point (unlike Mother!). This is the least whimsical thing I can imagine that involves an animated talking unicorn. I suppose I should have expected something like this from the guy who made the Crank movies. There are aspects of it that were cool, but I don’t see myself getting very far into this show.

Valerian and the City of a Thousand Planets
It was kind of pretty to look at sometimes, but I fell asleep before the halfway point. When I woke up I didn’t know what was going on. I also found that I didn’t care. There was some kind of error on the copy we watched that made it skip all over the place, and play scenes out of order (always a risk with Redbox). We didn’t notice until the end.

IT
We were in a light and drinking mood when we watched this, and I don’t think that’s quite the right mindset for a movie of this nature. It just didn’t capture my attention the way it might have on a different night. The new Skarsgard is terrifying, and if I didn’t hate clowns before I would have afterwards. That kid from Stranger Things is gonna find himself typecast as “the nerdy looking kid who’s in weird shit” if he’s not careful. Definitely scarier and bloodier than the 90’s mini-series, but I still miss Tim Curry.

The Last Jedi
Why are so many of my friends so mad about it? It needed to be an hour shorter (cutting out about 90% of Finn and Rose’s story would have been a good start), but it wasn’t bad at all. I think I’ve determined that my good versus evil fights to the death and huge epic battles tolerance is about 2 per movie – it had at least 3 of each. There were so many times that I thought we were at the final fight but weren’t that I gave up, and only knew that it was really over when the credits rolled. Benicio del Toro’s affectations are getting annoying, Super  Leia was ridiculous, but I still liked it. 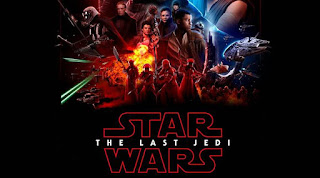 So yeah, not as much stuff as the last time I did this. It was still a lot though, and many I enjoyed better than last time too. Quality over quantity this year. And I apologize to my many nerdy friends for how long it took me to see The Last Jedi. It was probably for the best though. It had problems, but not nearly as many as I expected for how angry Schweck was when he was first talking to me about it. At least Dave might be pleased at how much stuff I didn’t hate. See, I don’t hate everything. I just hate a lot of things, and tend to be vocal about them. As in, don't get me started on how stupid the next Jurassic Park movie looks. I'm totally gonna see Rampage though. I'll just be waiting for Redbox on that one. I'm not that crazy.