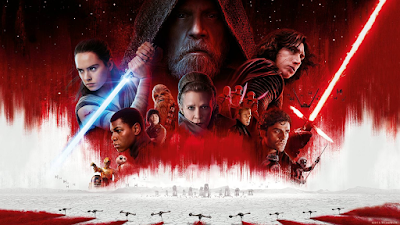 WARNING: THIS MIGHT CONTAIN SPOILERS FOR STAR WARS: THE LAST JEDI

I still don’t know how I feel about The Last Jedi. At first I didn’t like it. The more I thought about it, the less I liked it. This upset me terribly because the last thing I ever want is to not like a Star Wars production. I certainly don’t want to hate one, and I seemed to be inching closer to that by the hour.

Then I started talking privately – because to speak ill of this movie in public is to invite unrelenting derision – to my friends about it. In conversations with maybe a dozen people I discovered that there was a fairly even divide between those that liked Rian Johnson’s version of Star Wars and those that didn’t.

I started to feel better about some things and had feelings about other things reinforced. I’ll be seeing the movie again about ten hours from the time of this writing because I want very badly to love The Last Jedi. Whether or not I will remains to be seen. Either way, we’re recording a review tonight for the Needless Things Podcast.

Whatever your feelings about the newest Star Wars film may be, I think we can still talk about toys. Because there are some out, but after seeing that movie I have a massive list of must-have items. Sadly, I don’t see much of my list being fulfilled because Solo: A Star Wars Story is a mere six months away, which means the marketing cycle for that movie will begin sometime in February (if Hasbro sticks to recent trends). To me that’s tragic because a whole year passed between The Force Awakens and Rogue One; and then another between Rogue One and The Last Jedi, and in my opinion the collections from those last movies are still sorely lacking. Imagine how truncated Episode VIII’s toy line is going to be with such a narrow window.

What follows are eight The Last Jedi toys that I want to add to my collection. Normally I’d want everything in a 3.75” scale, but I don’t even know what I collect anymore. Assortments across lines have been so shoddy that I kind of have to take whatever I can get, be it 3.75” basic, 6” Black Series, or those stupid metal figures from the Disney Store. 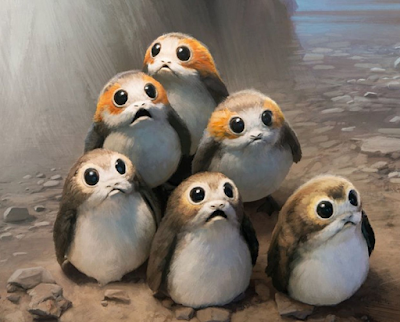 More Porgs – I own roughly thirty Ewok action figures. I want at least as many Porgs, so Hasbro and Funko and JAKKS Pacific and everyone else that has the Star Wars license needs to get on this. I want screaming Porgs, flapping Porgs, angry Porgs. I want a roasted Porg that other Porgs can look at in horror. I want Porgmania and I want it yesterday.

I bought into these little critters as soon as I saw them, and to my relief they were one of the things the movie got unquestionably right. I want more. 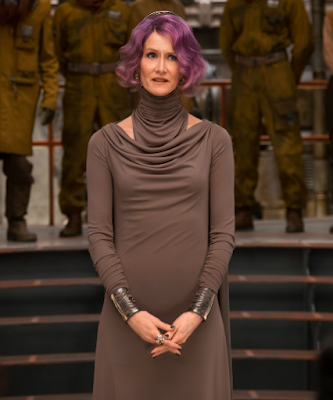 Vice Admiral Amilyn Holdo – Laura Dern was at her very best in this movie and played a role that had to be inspiring, but also enigmatic. One that we as the audience couldn’t trust, but also wouldn’t completely turn on. I’m making my way through Claudia Gray’s very good Leia: Princess of Alderaan novel right now, so I had the benefit of some backstory for Dern’s character and might have given her a bit more leeway while Poe Dameron was doing his dangerous idiot act.

Man, that dress she was wearing when she gave her big speech makes me feel like this character deserves a Hot Toys figure. Dern rocked the heck out of that slinky number. And you know I like some purple hair. 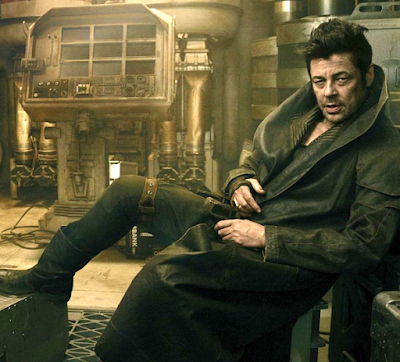 DJ – His stupid stutter or whatever was annoying, but otherwise Benicio del Toro’s legit scoundrel DJ needs more plastic love. There’s a Black Series figure out or soon to be out, but I want a 3.75” version. I loved the fact that he’s actually a bad guy. If it hadn’t been buried in a constant stream of narrative “gotcha” moments I think I’d love him even more.

B/SF-17 Heavy Bomber (Resistance Bombers) – HOLY CRAP. The B-Wing is one of my favorite Star Wars vehicles and I marked out big time seeing their descendants in all of their slow-moving glory. As a matter of fact, seeing these on screen might have been the peak of my excitement during my first viewing because it was still early enough in the movie that disappointment hadn’t set in. I need a toy of one of these. If there’s a Hot Wheels or other die-cast version I’d even buy that. I love these things.

There is a LEGO set, but that's mostly not my thing.

Puppet Yoda – I buried this one in the middle so that it hopefully won’t be seen by anyone that missed the spoiler alert up top. Yoda returns in this movie, but in the most delightful way possible – as the wickedly mischievous puppet we first met in The Empire Strikes Back. He looked – and sounded – fantastic and was an absolute delight to see acting next to Mark Hamill.

I want a Yoda puppet. Not a full scale one. I couldn’t afford that. But one that’s just big enough to fit my hand into and maybe to have some rods on the arms to operate. Hasbro and everyone else can throw those animatronic Jedi training or whatever Yodas in the trash because I want a puppet! 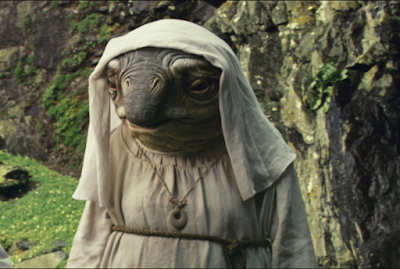 Ahch-To Caretakers – This was a fun reveal. From the moment we got to see the domiciles and architecture of Luke’s chosen place of exile I wondered, “Who’s maintaining all of this? Does Luke spend all day cleaning huts?”

Maybe that’s a little weird, but the scene where Rey discovers (and annoys) the Caretakers was fun, and the sort of humor Star Wars has traditionally done. As opposed to the endless stream of awkward jokey jokes that came off even worse than Finn’s “Droid, please” from the Force Awakens.

The Supremacy (Snoke’s Mega-Class Star Destroyer) – There’s a LEGO set available, as well as a playset from Hasbro (that transforms into BB-8, which doesn’t make any gotdamn sense), but I don’t do big LEGO sets and Hasbro’s doesn’t feature the exterior, which is what I want.

Best case scenario for me is probably one of the die-cast ships that The Disney Store has been producing. I’ll resort to Hot Wheels if I have to, I guess. I’d love to have one in the scale and style of Diamond Select Toys’ Star Trek Legends ships, but that probably isn’t happening.
Force Projection Luke Skywalker – Luke as he appears at the climax of The Last Jedi, in what is likely the most Alpha Luke form we’ve seen in the movies. He projects himself as a together, proper looking Jedi Master rather than the broken, disheveled man we see in the rest of the film. Granted, that makes it a massive letdown when it turns out it’s just a projection and then he looks like he’s going to die, then he doesn’t die, then he dies; but it was still a moment that appeared badass.

Whatever scale this figure came in, it would have to be super articulated so it could recreate the awesome fake fight scene with Kylo Ren that didn’t really happen.

Okay, so I have to make one comment on the movie – I feel like the audience had the rug pulled out from under us far too many times. By the end of the movie I couldn’t trust the narrative, which lessened the impact of everything. Nothing had been what it seemed, so I couldn’t; get invested in anything. Now that I know the story and the things that I know I will always dislike, I think I can enjoy the rest of the movie – much of which I loved – on its own terms.

Oh, we need a shirtless Kylo Ren, too. Dude is jacked to the moon. I would've included a picture for your titillation, but I'm not Googling that at work. These people think I'm weird enough already.