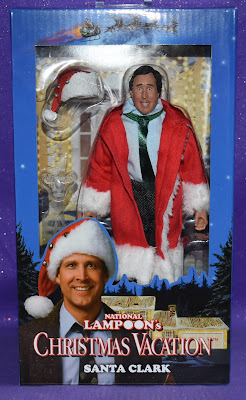 Some of the things I love the most are ones that I didn’t like at all at first – Big Trouble in Little China, Evil Dead, and Rad Ranger come to mind.


Actually, the only Vacation movies I liked the first time were European Vacation and the recent one with Christina Applegate and Ed Helms. I think I got the original and Christmas Vacation by my second viewings of those. The other two; the less said the better.

Clark Griswold is an idealist. He wants things to be just right for his family and always has a vision of how things should go, rarely taking into account reality or even what the rest of his family might want. He’s a big believer in “father knows best”, but not in an arrogant way; just a deluded one.

I can relate to much of that. Fortunately I have a lot more self-awareness than Clark and fight my desire to be that guy as much as I can. I’ll start planning the big vacation, but I’ll catch myself just shy of paying for it before consulting the family.

Because of all of that, I have a much deeper connection to Christmas Vacation – and most of the Griswold movies – than I used to. Before I had a family they were just funny movies. Now they speak to me on a whole other level that I can relate to. Clark Griswold is both a role model and a cautionary tale. He’s an inspiration and a warning.

Side Note: It’s probably worth mentioning that the pictures in this review were taken with a Nikon D3400 camera. I’ve been wanting a nicer camera for years and Black Friday presented me with a good enough deal to justify buying one. I’m still learning, but I’m definitely impressed with the difference in quality, even with these first test shots. I hope you guys enjoy better pictures going forward on Needless Things. 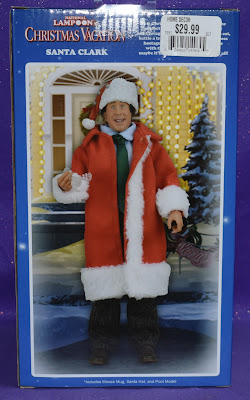 Fortunately NECA’s non-horror retro figures come in window boxes rather than plastic clamshells. There’s a picture of Chevy Chase looking appropriately crazy on the front (thought the figure sports a different crazy – yet still accurate – expression) surrounded by imagery from the movie.

The back is a picture of the figure with a blurb of some sort up top. I can’t read the blurb because FYE’s price sticker is in the way and isn’t the kind that peels off easily. I could’ve used the ol’ heat gun on it, but it just wasn’t important enough to me to read that blurb.

Side Note: I did pay a bit of a premium for this figure. To me that thirty bucks is pretty steep, but I thought I had missed out on this figure, so when I saw it in the wild a couple of weeks ago, I jumped on it. It was worth it to me.

There’s a plastic tray inside securing the figure and accessories. Behind that is a cardboard backdrop depicting the majestic, illuminated Griswold home.

All in all it’s a perfectly good, if unspectacular, box. It lacks the tremendous art of the horror figures, but gets the job done. And isn’t a clamshell. 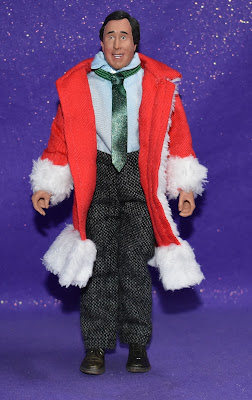 Standard male NECA retro figures, like the Megos that inspired them, all share a basic body. There’s plenty of articulation – not anything on the level of One:12 Collective or even Marvel Legends, but certainly superior to Mego. I think of it as “reasonable articulation”; the figure can be posed in ways that a standard adult might move rather than a superhero. 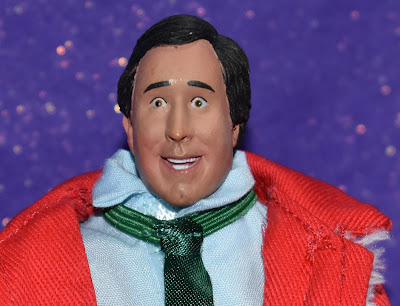 The Chevy Chase likeness is tremendous. NECA went all-out with the expression and used “FULL ON CLARK MANIA” rather than going for something more subtle. This is Clark Griswold moments after he’s careened over the edge, as he’s shouting, “Where do you think you're going? Nobody's leaving. Nobody's walking out on this fun, old-fashioned family Christmas. No, no. We're all in this together. This is a full-blown, four-alarm holiday emergency here. We're gonna press on, and we're gonna have the hap, hap, happiest Christmas since Bing Crosby tap-danced with Danny fucking Kaye. And when Santa squeezes his fat white ass down that chimney tonight, he's gonna find the jolliest bunch of assholes this side of the nuthouse.” 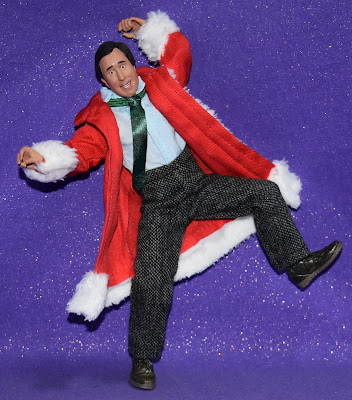 I’ve mentioned before that NECA almost seems to have different levels of paint quality. There are some lines like Aliens and Evil Dead where you have to look at several figures before you find one with acceptable paint – let alone great – and there are others that seem to have a much higher level of quality control. While I’ve only seen one of these, the fact that it has such a good paint job suggests that this figure falls under the latter category. The hair, eyebrows, and teeth are immaculate, but the placement of the irises and the tones on the skin are the things that make this paint job stand out. Excellent work, there. 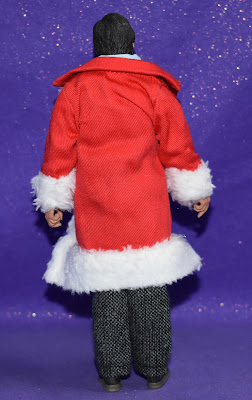 The figure has several items of fabric clothing, most of which are successful. Clark’s Santa coat looks great. The red fabric is bright and hangs nicely for this scale and price point. The white fur trim is bright and – amazingly – nice enough that it isn’t shedding. It fits the figure very well and just generally looks like it should. 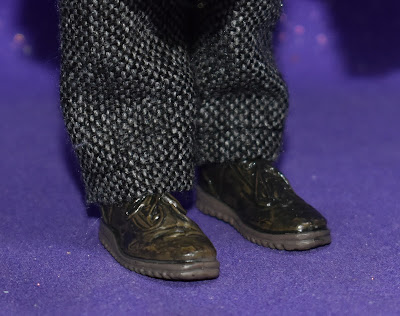 The pattern on the trousers is woven and not just printed, so they have a great look and texture. The shoes have a great level of detail in the paint and sculpt. The laces and seams are distinct and the soles are painted.

Clark’s dress shirt looks as good as it needs to. The fabric is light and moves nicely and the fit is good. A Velcro closure holds the front shut – it’s not like we need buttons at this scale and honestly I prefer this to those oversized buttons you might sometimes see. The collar is a little wacky, but again, at this scale and price point I think NECA did just fine. The shirt stays tucked into the trousers as you move the figure around, so you’re not constantly having to tuck a too-short shirt back in like you have to with some other lines. You know what I mean – you don’t even want to pose the figure because you know getting the clothing back into place is going to be such a huge pain in the ass. 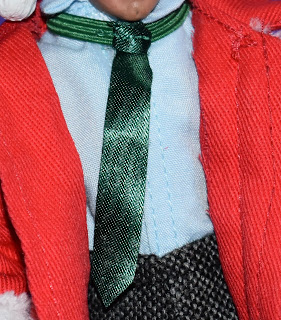 Finally, the tie. The tie looks terrible. It could be worse and I get the feeling that this is NECA doing the best they can with what they have, but there’s no way around the fact that the elastic and ribbon combo they’ve got here looks like junk. If the collar could sit properly it wouldn’t be as bad, or if the tie portion looked a little more finished it might be okay. As-is this piece is just bad. The Texas Chainsaw III Leatherface has the same problem and it’s one that NECA needs to figure out.

Clark comes with a Santa hat, a Wally World glass, and the model of the pool he’s planning to buy with his Christmas bonus. 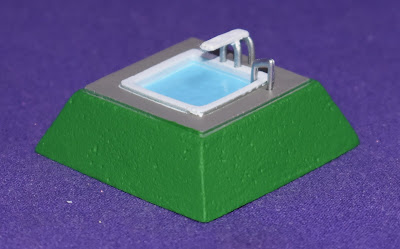 The pool model is just a fun extra that I’m happy to have. Ideally the water would have been a translucent plastic piece (I’m about seventy percent positive it is in the movie), but it doesn’t ultimately matter. The sculpt is excellent and the paint is great. 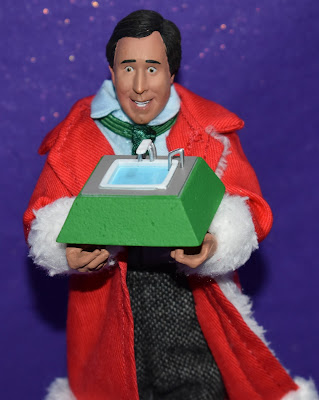 The figure looks good holding it. 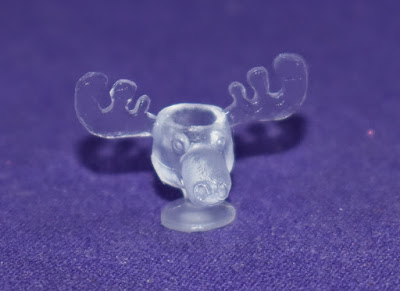 The Wally World moose glass is a nice translucent plastic that really looks like glass. The sculpt is nice and it’s even hollow. You could put a dab of egg nog in there if you so desired. I wouldn’t recommend it because you just know it’d end up all over Clark’s nice coat, but you could. 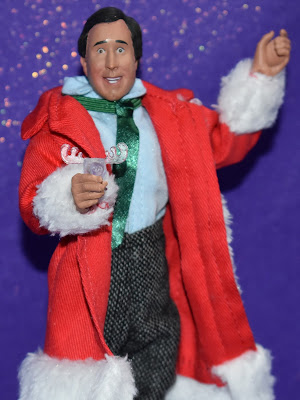 In the movie the characters hold these glasses by the antlers, but the figure can’t quite make that happen – the fingers are too far apart. Personally, I don’t find this to be a huge problem. 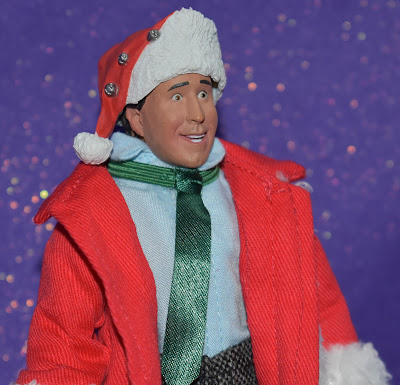 Clark’s Santa hat is a lot more specific than I had realized. The fur trim is huge. Since the hat is a sculpted plastic piece it doesn’t match the coat, but this doesn’t bother me. Your mileage may vary. There are three silver bells that look great and are a detail I hadn’t noticed before. The hat fits nicely on the figure’s head and stays put well. 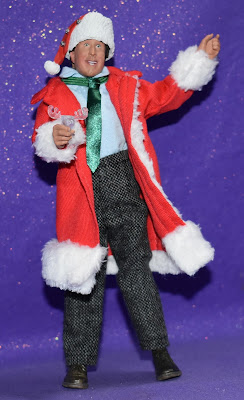 The necktie bugs me, but otherwise this is an excellent figure. The poseability is more than you need and the rest of the soft goods look great. That Chevy Chase head sculpt is just fantastic. I love seeing it on my desk.

Some folks will see this as a must-have toy of a beloved character, some might not be able to justify the price tag for a “seasonal” piece. For me, it’s one of those figures that I can’t believe got made and that I’m delighted to have in my collection.

Buy one from Amazon now and help out Needless Things!: