I have seen The Room in its entirety 3 times in my life. Some might argue that it’s 3 times more than anyone needs to see it, but those people probably saw it in the wrong place at the wrong time. The Room requires cocktails, friends, or a Rifftrax (and preferably all of those) to be enjoyed or appreciated. In the right context The Room is a beautiful mess that will make you laugh, cry, and question your sanity. I’m not obsessed with it like some people. I only paid to see it one time, and that was at the Rifftrax Live event. I will never go to a midnight showing, nor do I want to meet Tommy Wiseau (he just creeps me out). I did however really want to see The Disaster Artist.


The first weekend we had planned on seeing it my work schedule got messed up due to Snowpocalypse II: Electric Boogaloo. So we saw it last weekend instead, and I’m glad I chose this over The Last Jedi. I will see it soon, but I never go to Star Wars movies on opening weekend. I like my movie theaters between a quarter and half empty. I’ve also heard so many bad things about The Last Jedi that I’m glad I picked The Disaster Artist instead. Because I fucking loved it. I never read the book The Disaster Artist, but I think I will now. I’m sure there’s plenty in the book that didn’t make the movie, and I want to know even more of those twisted little details that made this so much fun to watch.


If you don’t know The Room then just go to YouTube. The entire thing is available to watch for free, or you can just watch the “highlights” (the best of the worst). Or you could listen to the How Did This Get Made podcast episode where they talk about it.  Hell, you could just watch the Honest Trailer. There are so many ways to see or learn about The Room that I don’t feel justified taking up your time or mine by going over it all again here.

If you've never seen The Room you'll be confused. If you're expecting a remake of The Room you'll be disappointed. If you want to know where Tommy Wiseau is from, and how he got all that money you won't be satisfied on that count either. This story focuses more on the relationship between Tommy Wiseau and Greg Sestero, and how they came to make the movie in the first place. Greg and Tommy met in an acting class in San Francisco, and for some strange reason Greg found himself drawn to Tommy (despite his acting being the literal worst) and the two became bestest buddies almost unbelievably fast. So much so that they move to L.A. together to pursue their dreams. I can see being intrigued by a man like Tommy Wiseau, but not so much so that I'd put my life in his hands by moving to another city and shacking up with him when I was just 19 years old. 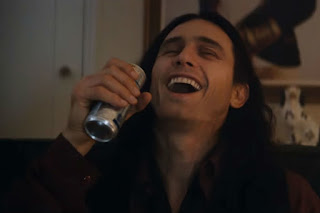 Once in L.A. things go better for Greg than for Tommy, and there is definitely some jealously. But neither one of them rockets to stardom like they thought. As a last ditch effort to keep their dreams alive Tommy decides that Greg's offhand comment of making their own movie is the way to go. We get to see a lot more of the shooting of the movie than we do the actual movie, but the actors playing the crew are so great that you don't mind. Seth Rogen's reactions to what's happening around him are priceless, and even Paul Sheer can kind of act a little (I'm just used to him being the effeminate chump on The League). A lot has already been said about what a great job James Franco does playing Tommy Wiseau so I won't beat a dead horse. I'll just say that he is the best I've ever seen him here. You know he can be funny, weird, or serious. This is the first time I've seen him do them all at once, and he holds absolutely nothing back (even his ass, although it looks way better than Tommy Wiseau's ass ever did). I also know that there's been Oscar buzz around his performance, but as good as he is I don't see that happening. I just don't see the Academy giving a best actor award to a movie based on The Room no matter how good the performance. I was actually more surprised to learn that Dave Franco could act. I've never seen him in anything that required much acting before this, but it was still unexpected. Other cast members are unrecognizable for most of the movie so I can only imagine that they're in it because they really wanted to be in it, and not because of their names. I didn't realize Zac Efron or Peeta from The Hunger Games were there until late in the movie. Not that who they were made any difference to me, but I'm not used to seeing actors so well hidden. I mean, I don't think Peeta has been super busy lately so it's not like he's a household name anymore, but it was odd none the less.

The movie does do a good job of reminding us that Greg is not necessarily a victim here though. Sure, Tommy loses his shit when Greg wants to move in with his girlfriend. He keeps Greg from getting other acting jobs due to the demanding (and seemingly neverending) shooting schedule of The Room. But it is difficult to tell sometimes who the bad guy is. Tommy is insane, of course, but you do feel sorry for him at several points. Greg is clearly unhappy, but he doesn't just say "fuck this" and walk out. He had to have known that this movie was going to suck pretty early on. If your dream is to be an actor you have to know when it's in your best interests to jump ship. But after seeing how the girl who played Lisa was treated the same could be said for her. Given that about six million dollars was spent on making The Room I assume they must have been paid well enough to stick around.

There were a few things that struck me as possibly inaccurate, but I only know what I've read and heard. I have a hard time accepting that Tommy Wiseau was so quick to jump on the "my movie is a comedy" thing. The How Did This Get Made podcast episode on The Room had an interview with Greg Sestero, and from what I remember he took a long time to accept that it wasn't the grand drama he envisioned. I also have trouble believing that Greg forgave Tommy that quickly for pretty much ruining his career. But The Disaster Artist is a buddy movie at heart, and as weird and fucked up as that friendship is the goal is accomplished. At it's essence The Disaster Artist is about two guys with a dream of becoming famous. Given what a train wreck of a movie The Room is we are still talking about it, watching it, and watching a movie about it. So I'd say they succeded in the end. 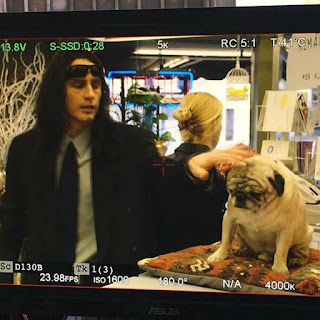 P.S. Make sure you stay to watch the side by side shots of The Room and the scenes of The Room shot for The Diaster Artist. Some of them are so dead on it makes me weep for the actors who had to spend that much time rewatching scenes until they were perfect. You'll even see my favorite scene: the flower shop. Hi doggie!