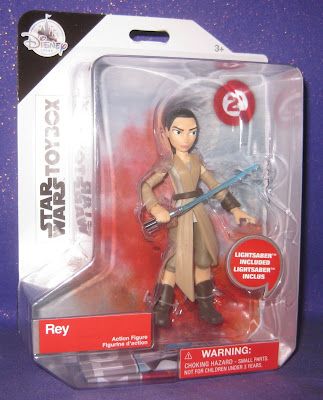 I don’t do as many toy reviews as I used to because, quite frankly, when you’re creeping up on a decade of doing them it gets a little old. But from time to time I do still get excited about something and it’s usually an entirely new line like this one – Disney’s Toybox.

The Disney Infinity video game series was a huge hit in our house. Initially we resisted all of the “Toys to Life” games because the exorbitant amounts of money needed to lay them in the way they were intended – purchasing not only the games but the dozens of figurines and level packs and whatever else – seemed ridiculous. But the time we’ve all spent together collecting and enjoying the various games and their respective toys has proven to be worthwhile.

For me, the best thing about Disney Infinity was the character design. It brought Disney’s many characters and properties together as a single appealing style. When Disney dropped the series last year (on my birthday), I was relieved that the hole we’d been throwing money into was closing, but also disappointed that there were so many characters that we’d never see adapted in the Infinity style.

Little did I know Disney already had plans in place to deliver what I’d always truly wanted from these excellent designs – an actual toy line.

On November 4th Disney Stores received the first waves of an all-new line of action figures under the name of “Toybox”. As of now there are three lines – Pixar, Star Wars, and Marvel.
I just happened to be out doing some Christmas shopping on that day. I received a call from my son, who excitedly told me about these figures that I knew nothing about. The Disney Store was already on my list of stops, so I made a mental note to keep an eye out for new figures.

I am both proud and slightly annoyed that he’s getting to the point where he’s more current on things than I am.

The new Toybox line was situated prominently right in the front of the store, complete with an acrylic display case, peg hooks, and shelves. I wouldn’t have missed it anyway. There were nine figures available on release day; three from each line – Buzz, Woody, and Jesse from Pixar; Iron Man, Thor, and Hulk from Marvel; and Kylo Ren, Rey, and a First Order Stormtrooper from Star Wars. And they all looked awesome.

I grabbed a couple from each line – I didn’t want to go crazy and buy everything until I had a chance to check them for quality.

Rey was a no-brainer, as despite my pre-Force Awakens determination to stick with Finn as my favorite character, after seeing the movie Daisy Ridley’s Rey is just too awesome.
Does the figure prove worthy? Read on. 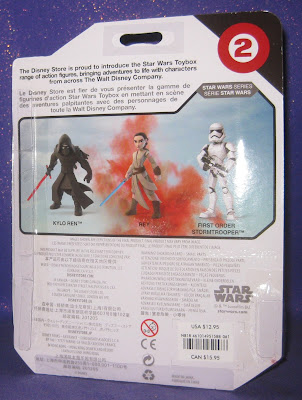 The new line is packaged in my favorite – a blister card. It’s the kind with one edge glued and the rest folded over the cardback and taped. I don’t love that, but I guess it’s more secure. I like the design with the logo sort of cut into the blister on the side. The figure is easy to see. I like the big, red label denoting who the character is. It’s not hidden like it is on Hasbro products.

The back features all of the characters from the wave (also a nice change from Hasbro) and a generic blurb about the toy line.

Each character is numbered within its line. Rey is #2 for Star Wars. 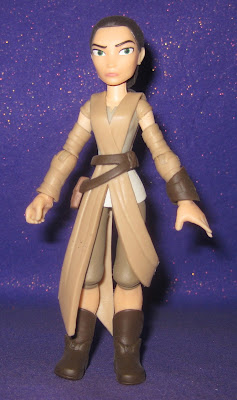 The figure is made from a slightly softer plastic that is almost rubbery, but doesn’t feel cheap. It works very well for the cartoony aesthetic of the line. 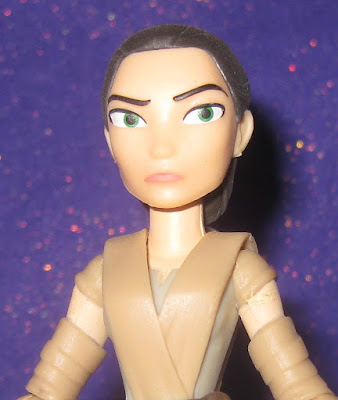 If you’re familiar with Disney Infinity, then you know that this figure is exactly the design from the 3.0 game. 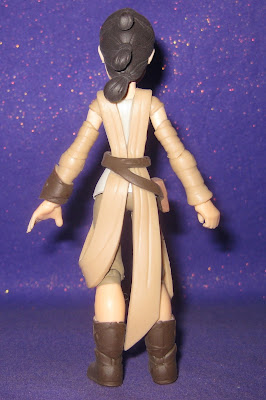 The sculpt is one of the cleanest I’ve seen – a lot went into preserving the shapes and forms of the style. It would have been very easy to leave out some detail or not reproduce it in as sharp a manner, but there’s a lot to look at on this deceptively simple design.
Obviously Rey is mostly muted, desert tones – this is the Jakku version, not the newer Last Jedi design – and they all look good. The various colors all share the same gloss, creating a uniform look that supports the line style. The applications are all clean and tight. You’re not going to have to sift through samples to find the one with the best paint job. Each one I looked at in the store was equally perfect. 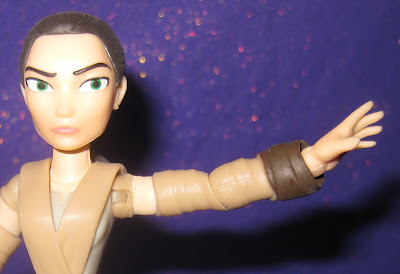 There aren’t many small painted details, but there’s exactly as much paint as there should be.

In the past I’ve complimented toy companies for incorporating articulation into specific designs, but the Toybox line makes it seem easy. Within this faithful reproduction of a character design meant for animation and to be smooth and rounded are fourteen points of versatile articulation. 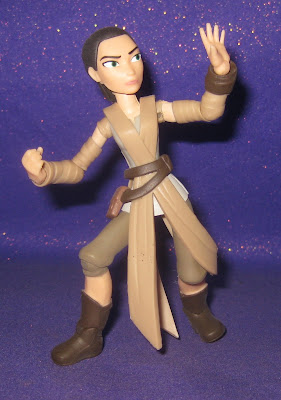 The head is on a ball joint and has a great range.

The arms feature shoulders on hinged swivels, hinged elbows with swivels at the top, and hinged swivels at the wrists. The shoulders are slightly limited by the design of the figure, but otherwise the arm joints all work together to create a large degree of poseability.
There’s a swivel at the waist. It would have been great to have a sort of ball joint like NECA’s Predators, but for the price point I’m impressed with what I got. 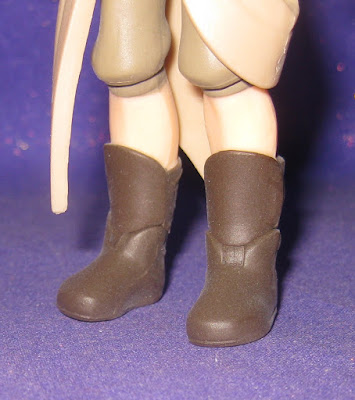 The legs have hinged swivels at the hips, hinged knees with swivels at the top, and hinged ankles. It all works well together, but I would’ve loved for the ankles to have been rocker joints. It doesn’t matter too much, as I can still get the figure to stand pretty much however I want. It’s worth noting that the Hulk figure – to be reviewed later – does have more sophisticated ankle joints. Which means there’s room for diversity within the line style.

Rey comes with Luke’s lightsaber. I’m thrilled we got this instead of that staff thing from Jakku.

It’s a great-looking lightsaber. The blade is the right shade of translucent blue and the hilt has all of the sculpted detail required to indicate Luke’s familiar elegant weapon. The vanes on the bottom are black and there are two red buttons – another case where the figure is deceptively simple. For thirteen bucks you might have expected a silver handle with relatively little detail – sculpt or paint. 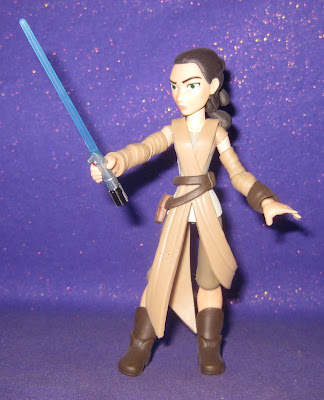 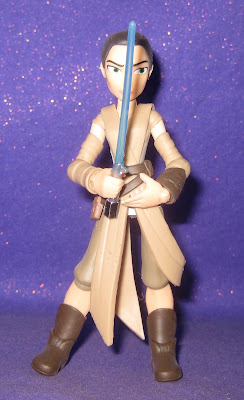 For $12.95 this is an excellent action figure. As of this writing I have played with four different figures from the Toybox line, but this one alone was enough to convince me that this is an exciting new toy line that my son and I are both going to enjoy collecting.

It has all of the articulation and style that collectors would want, combined with the durability and design appeal that kids enjoy. Got get some. You’ll thank me. 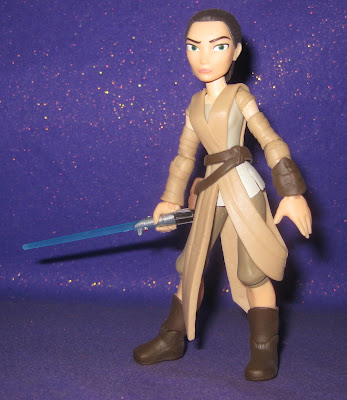