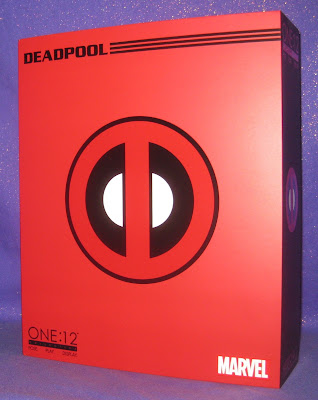 Some people complain about the constantly shifting (retreating) release dates on Mezco’s One:12 Collective line of action figures.

However, I would rather wait an extra year for a great figure than get an acceptable – or sub-par – figure “on time”.

Almost every One:12 figure so far has met or exceeded my expectations. The one exception is the Zoom figure, which I had to return three times because every single one that came in had a crooked belt. And not like, attached crooked, but actually warped. It’s an issue that I could have potentially fixed with a heat gun, but I do not fix things on $75 twelfth scale action figures. They had better be perfect right out of the box or they’re going back.

Other than Zoom, though, this line has been near-perfect. Mezco has delivered the best version of each character I have picked up, giving me that rare, “This is the last figure of this character I’ll need” feeling. Of course, that feeling is rarely accurate, but it’s a nice thought.

Deadpool isn’t necessarily one of my favorites. In the right hands he can be a brilliant character – I loved the way Remender wrote him in Uncanny X-Force, Deadpool Team-Up was always fun, and of course the movie was excellent. Even though I was reading New Mutants back when he was first introduced, I barely have any memory of him at the time and he didn’t make enough of an impression back then for me to seek out further adventures. I can’t remember exactly when Wade became interesting to me, but I’m not gonna act like I’ve been a fan forever.

That being said, I do like the character and the design, in particular. And it doesn’t take much for me to decide I have to have a One:12 Collective figure. Let’s see if this one delivers. 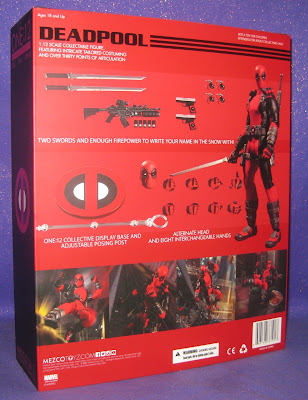 Mezco has changed the packaging significantly since the least one of these I reviewed. 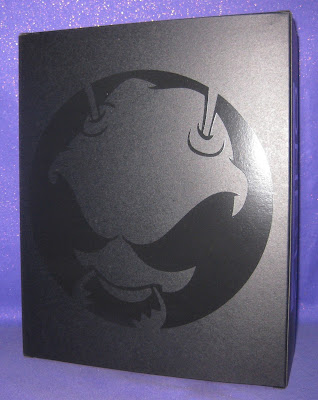 Deadpool’s box still has a slipcover like past releases, complete with fancy graphics and glossy inks on flat colors and whatnot. But once you remove the slipcover, the box inside is a simple window box rather than the one we’re used to with the magnetic panel. It doesn’t look as fancy, but I’m fine with it. Truth be told, that extra panel was nice, but wasteful. And it had to have an impact on the cost. Normally I don’t care one way or the other about packaging aside from commenting on how appealing it is, but I do keep the One:12 boxes. Despite that, I don’t mind them becoming a bit simpler. 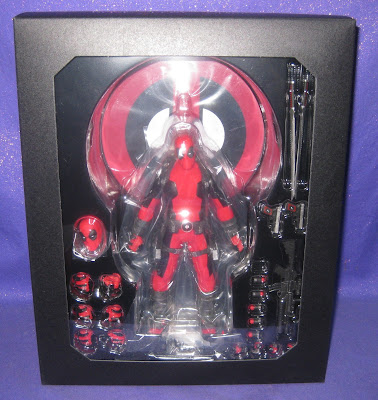 On the inside, everything is the same. There are plastic trays to keep everything safe and secure and it’s all very easy to open and unpack. There are several sheets of plastic film on spots to protect paint or whatever, but other than that everything is just lying in its place. 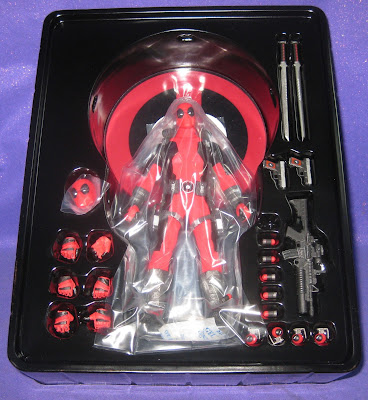 Even without the opening front panel this is still the best toy packaging I have ever bought. 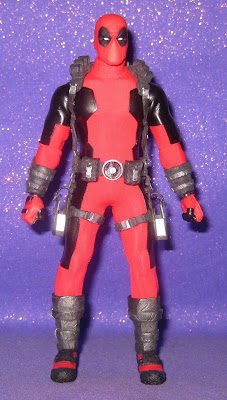 Deadpool has looked mostly the same over the years, with the only major changes being the number of pouches he has or what kind of footwear he’s sporting. This made Mezco’s normal job of creating a “best of” look quite easy. 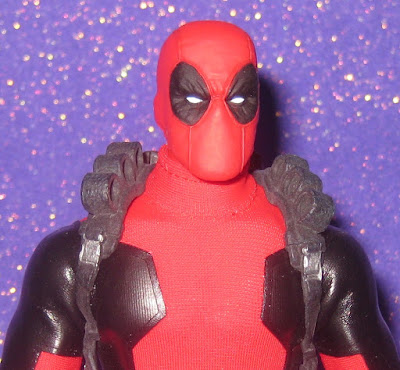 The default head is baseline Deadpool. The seams on the mask are all sculpted and there are sculpted wrinkles around the eyes to give him some character. It looks great, but is a little plain compared to what we’re used to seeing from Wade over the last couple of decades. It’s still very good and the paint apps are solid and precise. 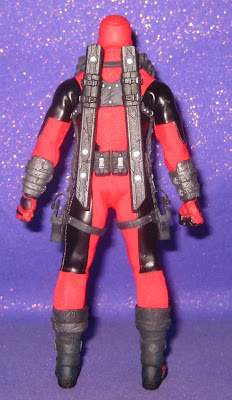 If you don’t know, the One:12 figures are like a space age update of the old Mego toys – a fabric costume on top of a generic plastic body. The difference is that the base body is packed with amazing articulation and is not generic across the line (though parts are shared where appropriate) and the costumes are the highest quality design and execution I have ever seen in a toy line, even including stuff from Hot Toys. 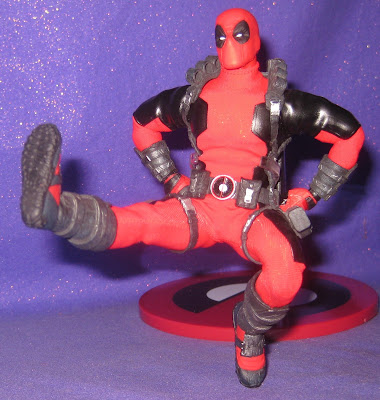 Think about the articulation on the best Marvel Legends figure you own, then imagine if it all actually worked well and felt solid. Then add some more useful joints like additional shoulder and hip pivots and two rockers on the abdomen rather than the swivel waist and crunch. And probably a couple more joints. These are functionally the best figures you can buy that aren’t Japanese. And thanks to the fabric costumes, they look tons better than any import toys because the joints are all covered.

I’ve mentioned before that I don’t know exactly what the rubber-ish material is or how Mezco manages to bond it to the fabrics so well, but it’s incredible to see in person. It stretches with the material and doesn’t give any indication that it might wear off or disintegrate over time. The placement of the black portion sis excellent and the fit of the suit is remarkable for this scale or any other. Believe me – until you’ve seen a One:12 figure in person you just don’t know how impressive these fabric costumes are. 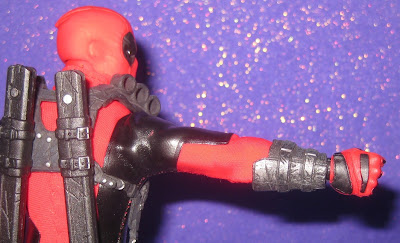 The sleeves and legs are secured to the figure underneath the gauntlets and boot tops. Somehow you can pose this figure pretty much however you want and nothing gets messed up or out of place. Sometimes you have to move the fabric around a bit, but it all works amazingly well. 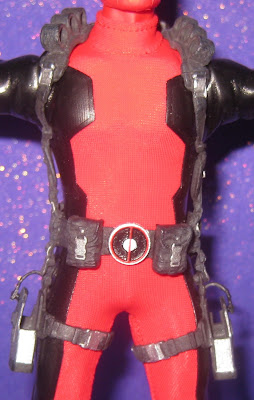 Deadpool has a separate holster/harness/belt combo on top of the suit. It’s sculpted to look like a combination of leather and fabrics, but has a weathered gray paint job. All of the rivets and rings are painted silver and the belt buckle has the appropriate Deadpool symbol. This rig is fairly flexible and moves well as you pose the figure. 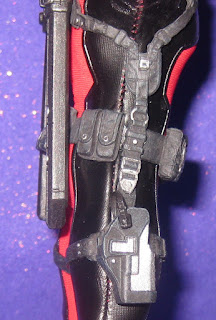 There are sheathes on the back for Deadpool’s swords and holsters – with closing clasps – for his pistols. The shoulders of the harness have six loops to store the grenade cartridges. 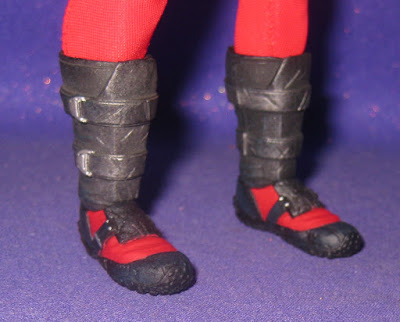 I don’t love it when artists give this costume the big, thick gauntlets and boot tops, but it does make the construction of this figure easier since they conceal the seams of the costume. I’m very interested to see how the final Spider-Man figure turns out since it doesn’t have this “cheat”.

Having said that, those parts do look good. They have sculpted damage on them and don’t increase the profile of the figure too much. He still looks appropriately ninja-like.

The gloves and shoes both look like modern sports-type apparel, which is what we see on Wade in current stuff. There’s a ton of sculpted detail on both, with clean black and red colors. I particularity like the nubby soles on the shoes. 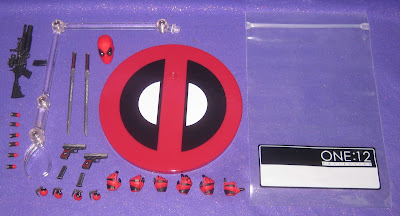 Like all One:12 Collective releases, Deadpool comes with a ton of stuff – six alternate hands, an alternate head, four standard grenades, six grenade cartridges, two pistols with magazines, two swords, one rifle with a magazine, a stand, and a storage bag. 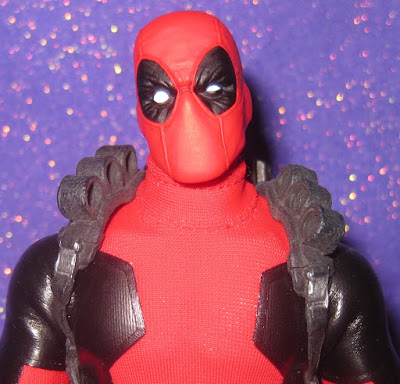 I love the alternate head; it will definitely be the one I display. Design-wise it’s the same as the default, but the eyes are doing the signature Deadpool squinty thing. It looks awesome and adds some much-needed personality to the figure. The heads swap out easily.

The swords are packed with detail – not just in the hilts and designs of the blades, but also sculpted damage and wear. They’re made out if a firm plastic that holds the shape and doesn’t get all bendy, but also doesn’t feel brittle. The steel color is fantastic and the hilts are painted precisely with Deadpool’s signature colors. They fit securely into both the sheathes: 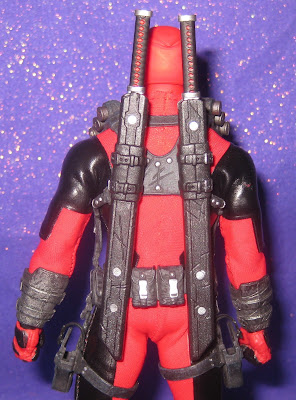 And the appropriate hands. 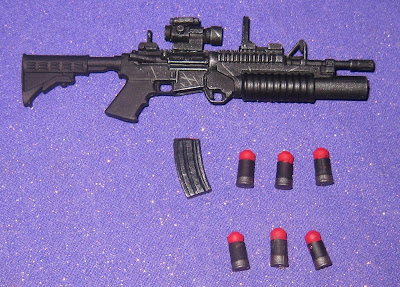 The rifle looks pretty standard at first, but closer inspection reveals some painted wear on the gunmetal finish and a moving barrel on the grenade launcher. The magazine has a sculpted and painted bullet in the tip and fits snugly into place. The grenade cartridges can be placed in the grenade launcher and also fit securely into the loops on top of Deadpool’s harness. 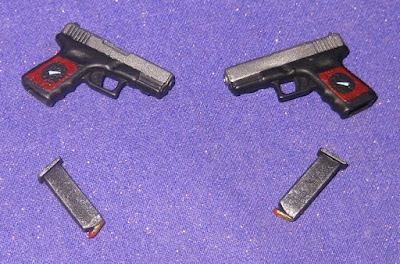 Deadpool’s pistols have plenty of beautiful, well-defined detail. The grips even have a texture to them, as well as a Deadpool eye on each side. The magazines have sculpted and painted bullets in the top and fit securely into the grips, though they aren’t quite as snug as the rifle. 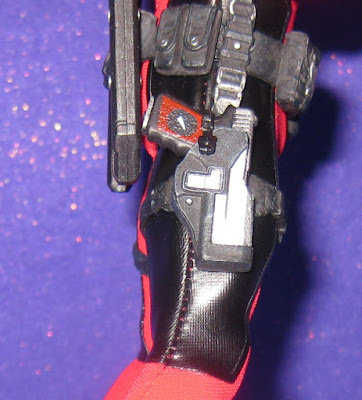 The pistols fit nicely into Deadpool’s holsters and the appropriate hands. 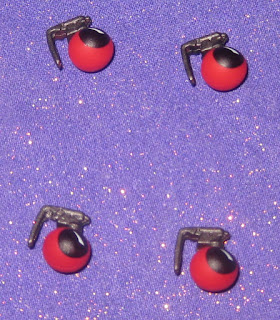 The standard grenades look great. It’s neat that the figure came with these, but I’m not really a fan of this style because they don’t ever stay secured to the figure and just aren’t the most exciting accessories to look at. Mine go in the bag. 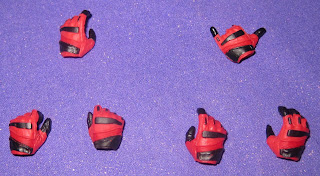 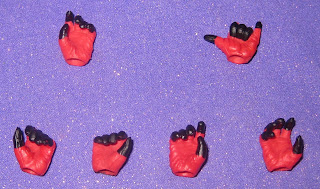 Speaking of hands, the figure comes with six alternates. Two for swords, two for pistols, one with a larger open grip, and one in a “hang loose” or “love” position, depending on who you’re asking. They all look good and have excellent paint, but that last one is a little odd, as it’s not a gesture I necessarily associate with Deadpool. 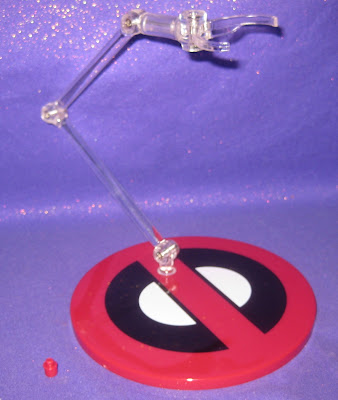 The stand is the One:12 display stand we all know and love. In simple mode, it’s a big, glossy circle with Deadpool’s logo and a single peg that the figure attaches to in a fairly secure manner.

In fancy mode an armature replaces the peg and allows you to pose the figure in wacky flying/jumping/dancing poses. The armature is amazing in that it can achieve pretty much any position you want and actually stay that way. I’ve had my DKR Batman in a mid-air pose for over two years now and he hasn’t so much as dipped. 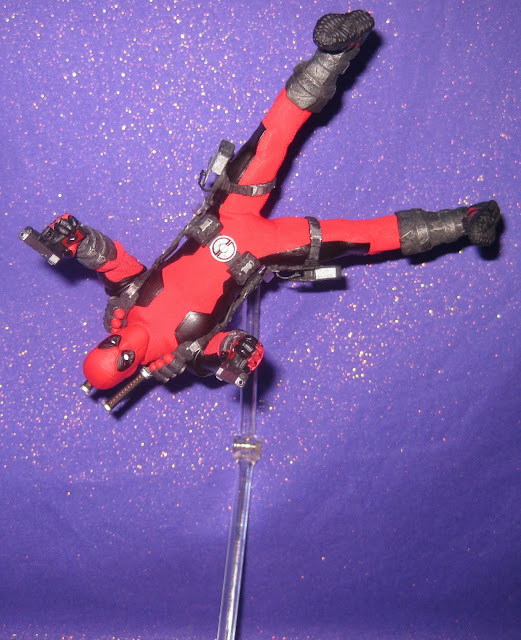 If you know toys and plastic and display stands, you know that’s pretty remarkable. 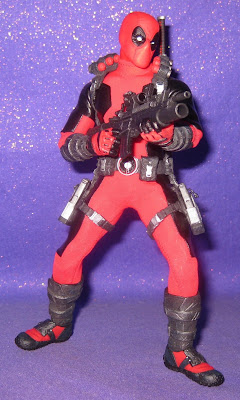 As many toys as this figure came with, I can’t help but feel a little disappointed. Most of it is pretty standard stuff and doesn’t specifically scream “Merc With A Mouth”. There’s no unmasked head and no wacky stuff like chimichangas or an inflatable donkey. To me, this feels like “first appearance” Deadpool from before he was funny. 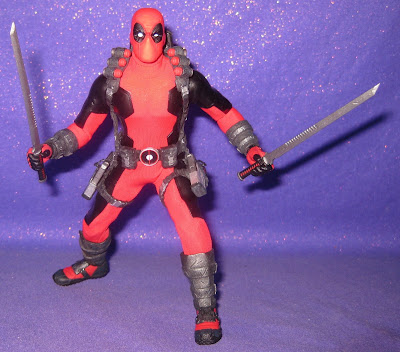 Okay, so even though this is essentially “Vanilla Deadpool”, it’s still a great action figure. It looks exactly like Deadpool should look and, if you’re willing to spend the money, is far, far better than anything Marvel Legends has offered (though Hasbro did win the accessories competition). If you’re collecting the One:12 line already and were wondering if this was a good entry; it is.

However, if you want a wackier Deadpool, I’d recommend you sit tight. I’d bet money that we’re getting a deluxe version with goofy stuff and possibly multiple unmasked heads, a movie version, or maybe even both. 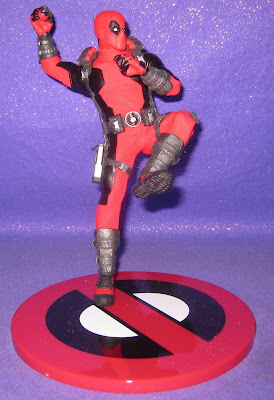 Buy one now from Amazon and help Needless Things pay the bills!: