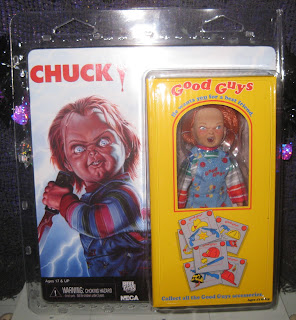 I think Chucky should be right up there with Jason, Freddy, Leatherface, and all the rest in the pantheon of iconic slashers. To some folks he might be, but it’s only recently that merchandise has started to reflect that.

Sure, there have always been Chucky dolls – of every scale except the right one – available. Action figures have been few and far between, though, which is ridiculous because Chucky is literally a toy. Out of all of the slashers, he’s the guy that should’ve been a no-brainer all these years. While McFarlane and even NECA have produced a few Chucky figures, he’s never been represented nearly as well as his taller contemporaries.

NECA has changed that this year with this retro figure and an upcoming Ultimate Chucky.
This one arrived first. I don’t usually review NECA’s retro horror figures because…

Okay, you guys. I have to admit something here that I’m not particularly proud of.

I don’t open these. The card art is so awesome that I want to display it and the crappy clamshells that NECA uses aren’t resealable like the ones from Figures Toy Company, so not only do you risk bodily harm on the sharp plastic edges as you cut it open, you can’t ever repackage the figures.

So I’ve got around a dozen of these but have never opened one despite the fact that I love the clothed 8” format. I’ve got plenty of loose figures of Jason and Leatherface and they’re pricey enough that I won’t buy two. Usually. But I did buy two of Chucky because I just don’t have that many Chucky figures and also I thought he’d look pretty swell with all of my sixth scale horror stuff. 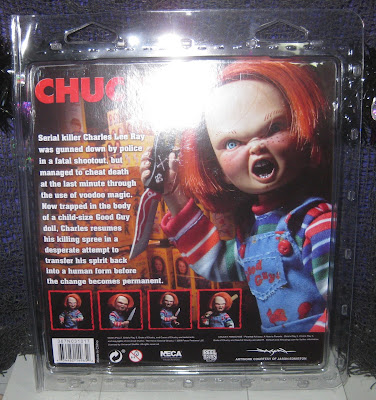 As I mentioned above this figure comes in an awful clamshell that will cut you as you’re opening it if you’re not careful. And sometimes if you are. I hate it. 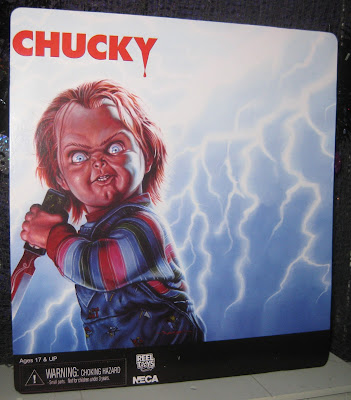 Inside, though, is a beautifully illustrated insert. All of these retro horror releases feature gorgeous original art. This Chucky was done by Jason Edmiston, who you should definitely be following on Instagram.

NECA went above and beyond with Chucky. Not only does he have the insert, he comes in a miniature version of the Good Guys doll box from the movie that’s so nice I’m actually going to count it as an accessory. 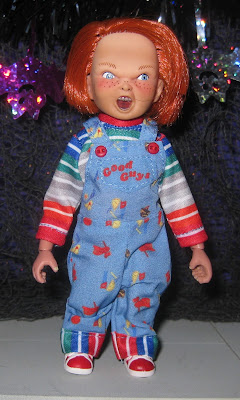 While Chucky is part of NECA’s 8” retro figure series, he obviously isn’t in scale with the other figures. He’s actually pretty close to one sixth scale. I’ll call that good enough since the doll has varied in size not just from movie to movie but even between scenes within movies.
He’s an evil, magic doll possessed by a voodoo guy. We can cut him some slack. 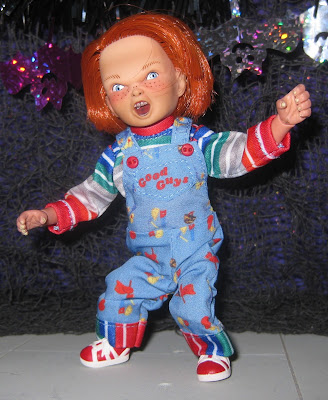 The base body has plenty of articulation. While this line is based on the idea of Mego figures, NECA has used much nicer bodies with far superior joints – these can actually hold poses. The arms a little long, but I’m guessing it’s because they’re the same ones from the child Jason Voorhees figure (which I also regret not getting when I had the chance). 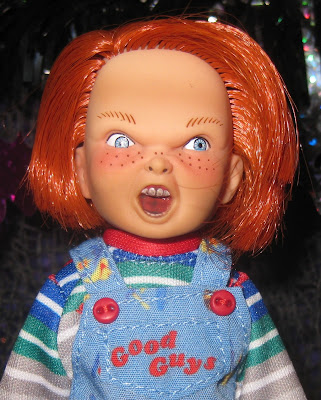 The head features rooted hair that looks amazing for the scale. The back is a little smooshed from being in the box, but otherwise the shape and length are perfect and maintain nicely. The color is spot-on, too.

Chucky’s head is hollow vinyl (or whatever) like an actual doll head. NECA released a version that was just a regular Good Guy doll, and I’m kicking myself for not ordering it. It came with Scream Factory’s release of the original movie on Blu-ray. This version is full-on rage Chucky and it looks great. The freckles and eyebrows are perfect, but even more impressive is the subtle blush on the cheeks and the paint job on the mouth. Chucky’s teeth and tongue look noticeably more organic than the rest of him and it’s slightly disturbing. 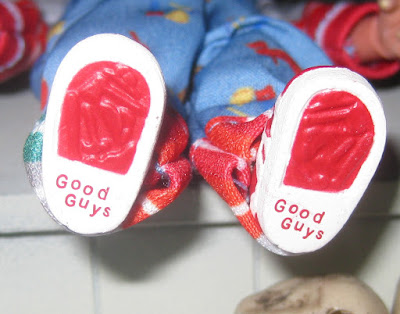 Chucky has his little Good Guy shoes on and they even have the tread pattern and logo on the bottom. This is a crucial detail, but also one that I’m not sure I would have thought about if it was absent. 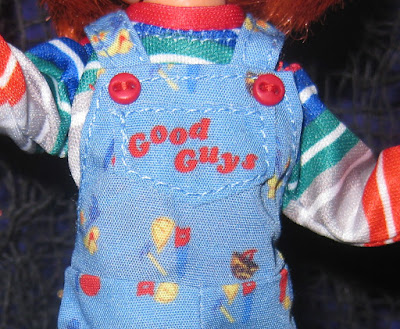 The clothing consists of two layers – the shirt and the overalls. The shirt is pretty much the same material an actual doll’s shirt would have – that shiny polyester-type stuff. The printed stripes are clean and look great. The coveralls are a denim-like fabric and feature the various tools of the Good Guys’ trade. There’s a little pocket on the front (sewn shut, which is fine) and actual buttons (not functioning, also fine) on the bib. 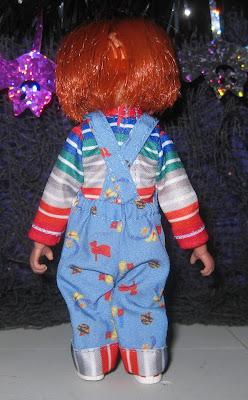 The weight and detail of the soft goods are excellent for this scale. Everything hangs and moves nicely and doesn’t have that weird thing where the fabric seems to big or thick for the size of the figure.

Chucky comes with a Good Guys doll box, a hammer, a baseball bat, a butcher’s knife, and a toy knife. 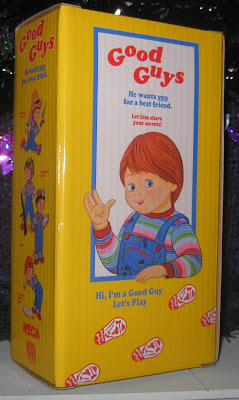 The box is fantastic and one of those great extra touches that NECA can be so good with sometimes. Made of a thick, sturdy cardboard with plastic film over the window, this isn’t altered to be a box for a horror toy, it’s just a reproduction of the package from the movie, complete with graphics of Good Guys running around doing things. It’s awesome. 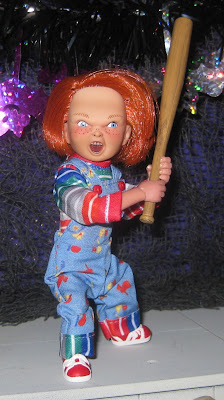 The bat has a wood grain sculpt and a paint job that brings out the details. It’s a “fresh off the rack” bat, so it doesn’t have tape on the grip or wear. 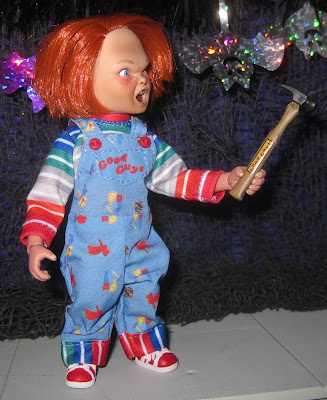 The hammer has the “Good Guys” logo on it, as well as plenty of sculpted and painted detail. 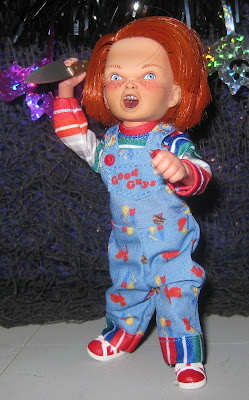 The butcher’s knife has a silver blade that actually extends down into the handle, just like a real knife. Even the rivets have silver paint on them. 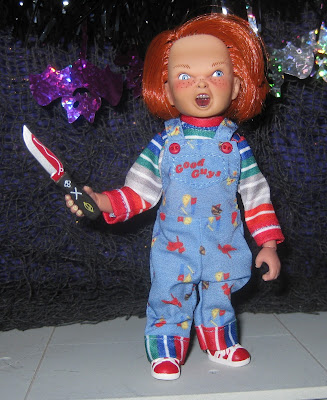 Finally, there’s the toy knife that most of us associate with Chucky. The sculpt is perfect for the scale, but the paint apps are what really sell it. This looks exactly like a tiny version of the movie knife. It’s so cool that I think I’d probably buy a full size prop replica if NECA made one.

All of the accessories fit into Chucky’s hands better than I actually expected them to. Oftentimes these kinds of figures don’t interact with accessories particularly well, but not only can Chucky hold them all, he can be posed to look like he’s actually doing things with them.

Sure, I would’ve loved an extra head that wasn’t screaming or even just the non-evil Good Guys head. But this isn’t really that kind of toy line. Check back in a couple of weeks after I’ve gotten the Ultimate Chucky and we’ll look at some crazier doll heads! 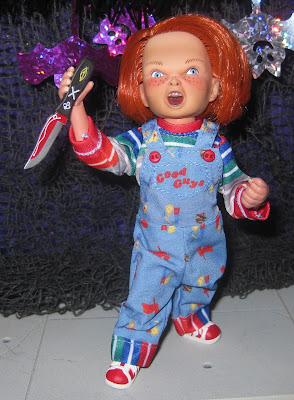 I love this figure. It delivered in every way possible for what it is and I’m thrilled to have it. It looks great amidst my sixth scale horror figures, too. Whether or not it’s worth thrity bucks is probably going to vary from collector to collector, but when you consider the price of human-sized sixth scale figures it works out pretty nicely. This Chucky is so good it was hard for me to resist the temptation to open the other figures in the line. Which I’m sure is going to happen at some point.

Buy one from Amazon and help out Needless Things!: