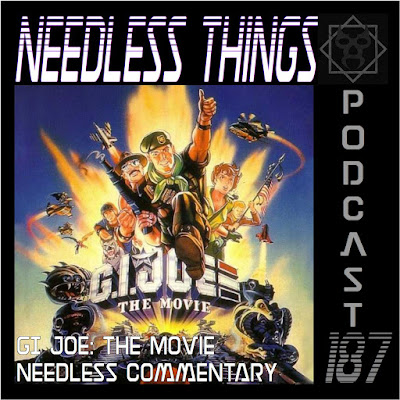 Part of an ongoing series – the Needless Things Irregulars gather in the Phantom Zone to provide their own unique commentary on classic genre films!


This month’s movie is the 1987 animated feature, GI Joe: The Movie. The Irregulars are joined by special guest Noel from GI Joe cosplay group The Finest’s Southern Command.

Thirty years ago Hasbro planned to release an animated theatrical GI Joe feature, but those plans were derailed by the failure of similar Transformers and My Little Pony releases. The feature – which had completed production – was instead moved to a VHS release and eventually made part of the regular animated series’ syndication as a standard five-part miniseries.

Over the years many elements of the feature have come under fire, from character selection to continuity to the introduction of the feature’s villains, Cobra-La.

Listen in as Dave, Arian, Ryan, and Noel revisit this landmark in GI Joe history to discuss its worthiness!