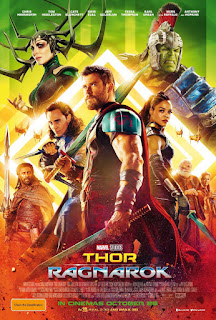 I hope I don't get kicked out of geek club for this. I seem to be one of the few people who didn't unreservedly love Thor: Ragnarok, and I feel like I need to express some of my dissatisfaction. I liked it, but had far more problems with it than I had expected. If my friends who don't love superhero movies as much as I do liked it more than me than I feel that there's a problem that needs to be addressed. There are probably some spoilers here so read at your own risk.

I really enjoyed What We Do in the Shadows. I didn't realize until just after the newest installment of Thor came out that it was directed by the same guy. I like Taika Waititi very much, and was interested in what he would do with the franchise. Unfortunately the results were a mixed bag for me. Even watching the previews I saw that this was going to be very different tonally than the other two Thor movies. It looked slick with the sort of 80's music and graphics that I've come to associate with the Guardians of the Galaxy movies. Not what I had come to expect from Thor, but given the formers success I thought it was marketing to reach that same audience. The Thor movies have always been a little darker and more serious than the rest of the MCU. Given the heavily Shakespearean tone of the comics I thought Kenneth Brannagh was a great choice to helm the first movies. But say goodbye to seriousness since it appears that Thor has spent the time since his last film appearance traveling the universe working on his stand-up comedy act. 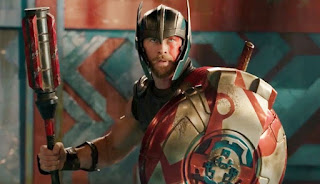 The silliness is so pervasive that I almost forgot about the inclusion of Doctor Strange at the beginning. I thought he was a great touch, but it was one of the few. There are so many jokes that it's actually more of a comedy than an action movie. When they do take time out from cracking one-liners some cool battles happen. Thor truly becomes the god of thunder, and Asgard is destroyed. Those are two big things that shouldn't be set aside so quickly for more jokes. Mythologically speaking Ragnarok is a pretty big deal, but that's all quickly forgotten as they sail away in a spaceship to settle the inhabitants of Asgard on Earth. Several characters say something about Asgard being a people, not a place. Um, no it's that place that's disintegrating into a million billion pieces just behind you. Thor's father dies along with most of his best friends, he's forced to kill his sister, and destroy his world in just a matter of days. Oh well, time for more jokes. 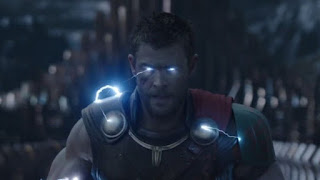 I also feel like the reveal of The Hulk being on the planet run by Jeff Goldblum should have been a surprise. That scene was in every preview I saw though. It would have had much more of an impact if that had been left to see in the theater. And since when is he funny? I guess since everyone else gets jokes it wouldn't be fair to leave him out. I'm used to a few funny quips in the interactions between Thor and Loki, but sometimes the quipping was so fast that I couldn't keep up. Lines that could have been funnier were overshadowed by the next five funny lines immediately afterward. I really do enjoy a superhero movie with some levity, and fun. I just don't feel like this was the right direction for Thor. 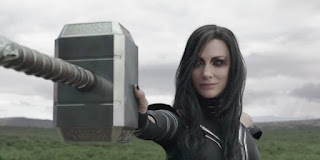 There are a few places where this movie does shine though. Cate Blanchett is super as Hela. She's badass in that skin-tight outfit, and her horn helmet is amazing. She has a few funny lines, but far less than the rest of the cast which I also found enjoyable. She crushes Thor's hammer like it was made of styrofoam (which it probably was), and slaughters hundreds of people in mere moments. Badass. Even though he didn't get to do much until the big final battle I also like to see Karl Urban getting work outside of the Star Trek movies. Speaking of battles: they're all really well done. Mr. Tibbs got bored and left for an extended smoke break, but came back in time for the set-up of the final battle. He felt like he saw exactly as much of the movie as he needed to see. There are several battles nicely scattered throughout the movie to keep the jokes from becoming too overwhelming (which almost worked), and they are all enjoyable. I do have to admit that I thought Led Zepplin's Immigrant Song was only for the previews, and hadn't expected it to be used (twice) in the actual movie. That's a pretty minor gripe. Hela commands a hardcore army of dead warriors as well as her enormous wolf Fenrir. When Thor, Loki, Heimdall, a Valkyrie he also just happened to be on the Goldblum trash planet, and the Hulk face off against Hela and her army it's wonderful to finally sit back and watch some carnage. And Thor turns into Storm from the X-Men and can shoot lightning bolts from his ass. Well not really his ass, but it was still cool.

While I didn't consider it appropriate for the film, Mark Mothersbaugh's score was good. I simply felt like it would have been better placed in something like the upcoming Ready Player One. It's all about 80's pop culture, and Thor really isn't. So final thoughts: I liked it, I really did. I just don't love it the way everyone else seems to. I'm not going to compare it to Guardians, but it certainly laid the groundwork for Ragnarok. And I don't necessarily think that's the best thing for this series. It's been a huge box office success though, and since everyone else is on board this could just be another case of me being the lone voice of dissent. It isn't the first time (nor will it be the last) that I find myself in this position.