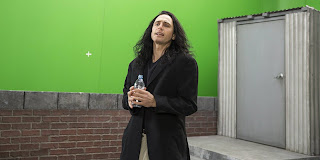 With the holidays well and truly upon us (I now give you leave to put up your Christmas decorations. Before Thanksgiving is just too damn soon) it's time for holiday movies to start hitting us upside the head. We've been seeing the previews for months in some cases, and eagerly awaiting the release of many of them. As with any blockbuster season, there's also some real garbage coming out. I'm here to help you sift through the crap, and decide how to spend your valuable time in December. This is by no means a complete list of everything coming out in December. I just went with the ones that I haven't stopped hearing about or seeing ads for.


December 8th - The Disaster Artist
If you've seen The Room you know it's a pile of shit. Possibly one of the worst movies ever made even. "Actor/director" Tommy Wiseau has somehow built a career around this hot ass mess, and I blame everyone who's ever seen it for encouraging his nonsense (myself included). That being said The Disaster Artist is at the top of my holiday viewing list. Sorry Last Jedi, but I was always going to see you anyway. One of the actors who made the unfortunate choice of starring in The Room wrote a book about Tommy, and how the movie got made in the first place. James Franco and Seth Rogen read that book, and decided to turn it into a movie. From what I've seen Franco's impression of Wiseau is spot on, and I can't wait to hear him scream "you're tearing me apart Lisa!" in that incomprehensible accent. 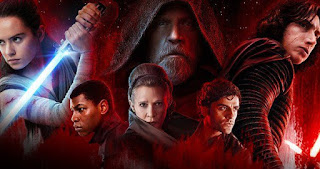 December 15th - Star Wars: The Last Jedi
The Force Awakens wasn't perfect, but I would have seen a new Star Wars movie no matter what. After sitting through the prequels I'm certainly not going to give up now. Once the teaser trailers stopped, and the real clips started coming out I got excited. Like Force Awakens excited. I had been on a Star Wars downswing after reading too much about Solo so it was nice to get enthused again. It'll be tough to watch Princess Leia die, but no harder than seeing Han Solo die in the last movie (although at least we know that Harrison Ford is still alive so we do have that small comfort). Hopefully we'll get to find out why Snoke is a threat since he's not much of a villain yet. Kylo Ren is just a little too emo to fill his grandfather's shoes. Maybe some of this was already explained in books I haven't gotten around to reading yet, but I also know that I want my Star Wars on the big screen more than I want it on the page of a book. I need that little chill I still get when the music kicks in right before the opening crawl starts up. 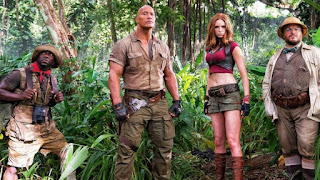 December 22nd - Jumanji: Welcome to the Jungle
Why is there a sequel to a movie I didn't care about when it came out in 1995? Whatever the reason this is a no for me. Four teens get sucked into an old game console rather than a board game this time, and turn into the game characters. I like the Rock, I like Karen Gillan, but I haven't cared about Jack Black in at least 10 years, and I'm completely indifferent to Kevin Hart. I know that some people like his funny little whiny guy dynamic set up against The Rock's big tough straight man thing, but I'm not one of them. Dudes that like the The Rock probably also think Karen Gillan is hot. She does look pretty badass so that may be a draw for some, just not for me. I'm not saying I'd never watch it, but if I do see it it'll be 3 years from now when it's on TV for free and nothing else is on. I guess this is more of a family movie, and since there are no kids around here for me to disappoint I don't have to feel bad about saying no to someone asking me to take them to see it.

December 22nd - Pitch Perfect 3
How is this even still a thing? 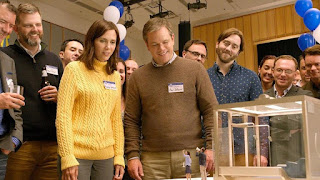 December 22nd - Downsizing
All I could think of when I saw this trailer was the old Steve Martin bit about "getting small". Is that where the idea for this movie came from? If it is then I might be more inclined to go see it. Matt Damon stars as a man who is unhappy with his life, and decides that the way to fix it is to undergo a new treatment that makes him Ken doll sized. Everything is cheaper and better in the new Barbie dream house universe so why not? I'm not sure about this one. I may wait for more info to become available a little closer to release date to decide for sure. I mean, if I find out he has to fight giant spiders or something I would be more interested. Right now I'm in the "meh" zone. It looks like it might be cute, but it also looks like I might be better off waiting for Redbox. 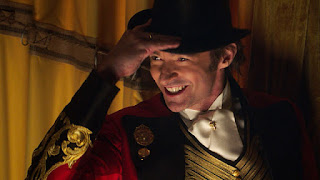 December 29th - The Greatest Showman
I like my musicals by Disney, and I like them animated. I know that Hugh Jackman is done playing Wolverine, and has a lovely singing voice, but I don't need a musical about the circus. P.T. Barnum might be a legend, but that doesn't mean that I want to hear people sing about it for two hours. It looks all magical and whimsical and all that, but that's not really the sort of thing I'm in to. I always found the circus smelly, and garish anyway. I'm no fun like that.

So six movies, and just two that I'm definitely seeing. At least I don't have to worry about trying to see too many movies during the busiest month of the year, and can save that money to go see The Last Jedi a few more times (I'm going on the hope that it'll be good enough for repeated theatrical viewings). Sorry if something you want to see didn't make the list. It's your own fault for not wanting to see the movies that commercials are trying to shove down our throats right now.