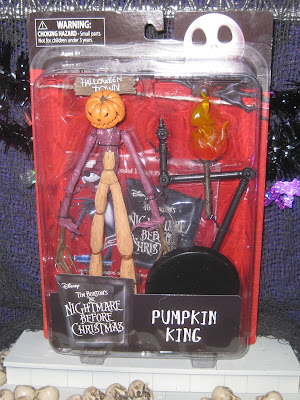 I’ve picked up a few of Diamond Select Toys’ The Nightmare Before Christmas figures and they all share common traits – they look great but are ultimately disappointing in some way.

For the most part I just want these to sit on the shelf and look pretty, though, so I can deal with some wonky or even straight-up bad articulation. Or even a leg breaking right the heck off (this happened with the Jack Skellington figure I bought last year and didn’t bother reviewing). I glued the leg back on, put the figure on the shelf, and never touched it again. It looks great.

For the most part DST is doing much better with their recreations (reissues? I dunno) of the larger Jun Planning articulated dolls. But I do like the look of these smaller figures and if you pick them up at Toys R Us they’re only fifteen bucks, which isn’t bad. They don’t come with the large accessories of the Direct Market releases, but that’s okay because I’m trying to conserve shelf space.

When I saw Jack’s pumpkin head hanging on the pegs at TRU, I had to grab this one. Not just because it’s a perfect toy review for 31 Days of Halloween, but because I love this version of Jack Skellington. 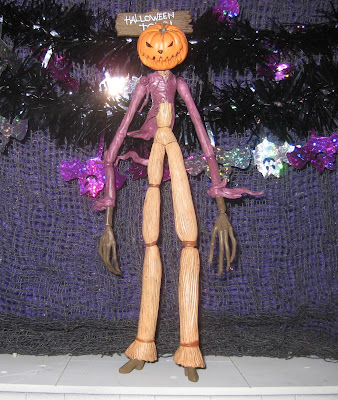 The vibrant colors are what grabbed my eye – Pumpkin King Jack is one of the brightest characters in Halloweentown and will be a great addition to a black, white, and blue shelf.
The translucent torch flame and visible-but-not-obnoxious joints drew my eye, as well. 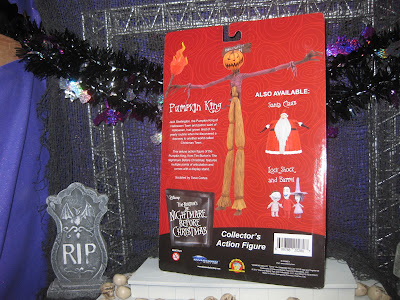 It’s a simple blister card, which you guys know is my favorite. The graphics are basic but appealing and look different enough from everything else in Toys R Us’ “Collector Section” to grab your attention.

The back features a detail picture of the figure as well as the other two items in the wave – Sandy Claws and Lock, Shock, and Barrel. 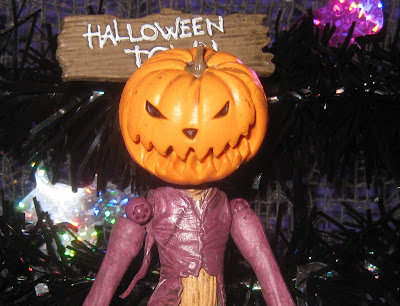 Jacks’ pumpkin head – or more accurately, mask – has a beautiful sculpt and paint job. All of the sculpted detail is dramatic. From the lines of the pumpkin to the mouth, which is wide and deep, this one looks better than most. The brown wash brings the lines out and the paint in the cutouts is brown rather than black, which gives it a more lifelike look. 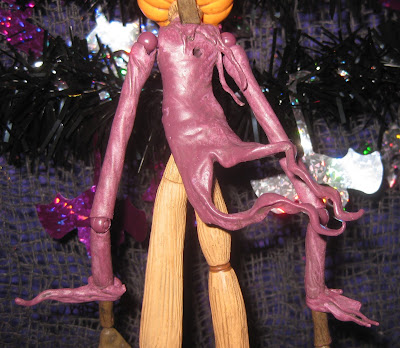 Jack’s jacket is super interesting and almost overshadows the head. I love the plum coloring with the dark wash, and there’s a ton of sculpting going on. The front has lots of folds and some actual stitches. The tails and sleeves are sculpted to suggest motion, which I normally don’t prefer, but in this case lends the figure a kinetic look that fits the Pumpkin King. After all, he is nothing but motion in his big introductory scene. 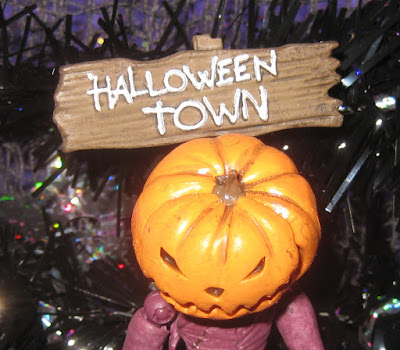 The Halloween Town sign is mounted on the figure’s back, another touch I don’t think I’ve seen before. It adds a sort of gruesome effect and the sign itself looks great. The wood looks aged and worn and the letters are sculpted, not just paint.

Jack has tree branch hands that really creep me out for some reason. 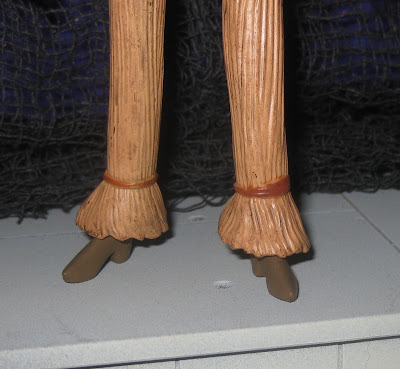 Without the context of the rest of the figure, the straw pants just look like hippie pants, especially with those boots underneath. But the sculpt and paint are excellent. I like the asymmetry of the bindings. I know that’s inherent to the character’s design and DST is just reflecting that, but it’s neat. 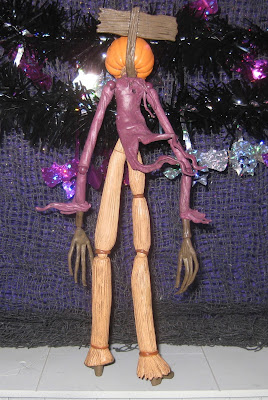 From head to toe this figure is visually a wonderful embodiment of Halloween.

The Pumpkin King comes with a torch consisting of two pieces and a stand that also consists of two pieces. Sort of. 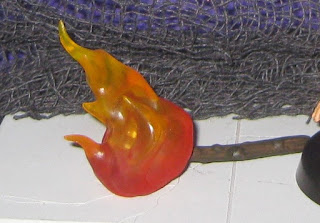 The torch looks really neat. The handle has a translucent flame effect on the end that is either supposed to be the recently extinguished flames or just about to burst into flames.
The second piece is sculpted translucent flame that fits over the end of the torch. It works well and looks great. It would be even better if the figure could hold it. 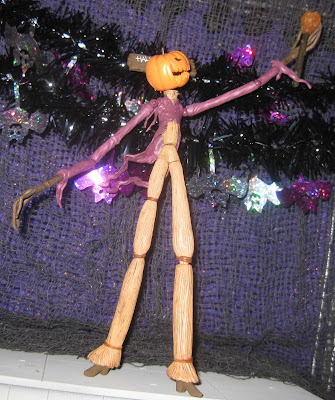 You can sort of wedge it between the fingers – which are not sculpted to hold anything – but the arms aren’t strong enough to hold it up anyway. The pose I got was achieved with a lot of patience and effort and lasted exactly long enough for me to take the picture. 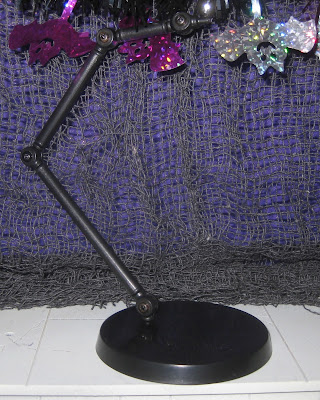 The stand has a plastic base and an armature consisting of three segments and four joints. One end plugs into the base and the other plugs into a hole in the figure’s back. 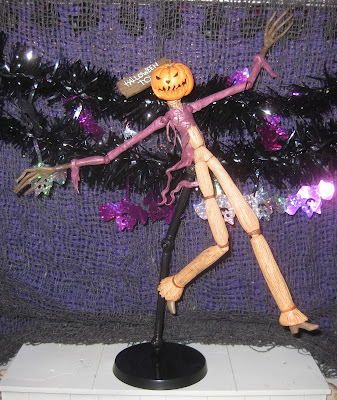 It works well if you stand the figure on the base, but isn’t strong enough to support the figure in a leaping or dancing pose for any amount of time, much like the finagling I had to do for the torch picture, the non-standing poses you see took a lot of effort. 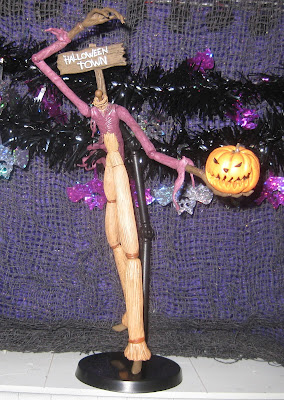 The figure has plenty of articulation. Some of it is great, some of it isn’t.

The head is mounted on a ball peg, so has plenty of range in every direction. It also pops off, which is fun. Fortunately it stays firmly attached when it’s on.

The shoulder and elbow joints are actually similar to the construction of the stand. The arm parts are plugged into pivoting joints, so there’s swiveling motion on either side of each joints and you can take the arms completely apart. If, you know, for some odd reason you want to. There’s a very good range with these, partially because they can come apart a bit at each joint to provide slightly more leeway.

The hands are just plugged into pegs and don’t have much range other than swiveling.
Speaking of swiveling, that’s what the figure does at the waist and, for some reason, the hips. Those latter two are utterly useless, as they’re just joints cut all the way around and provide no new poses whatsoever. They are the worst hip joints ever.

The knee joints are the same as the shoulders and elbows and are pretty good, but ultimately disappointing due to the hips.

The introduction of the Pumpkin King is one of the most kinetic and dynamic scenes in The Nightmare Before Christmas and this figure deserved better articulation than what it got. I was still able to achieve some neat poses, but those hips are a shitshow. Boo. And not in a good way. 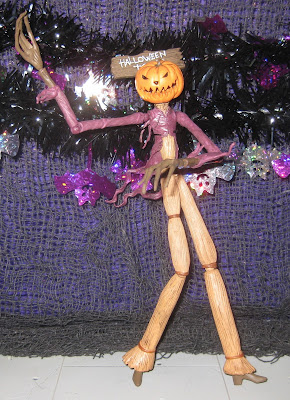 The Pumpkin King looks great. If you just want a figure that can wave its arms, then you’re in luck. If you want something a little more interesting that can be posed in any of the wild ways that Jack dances in the film, you’re going to want to look elsewhere. But I have to admit – for fifteen bucks, this figure is worth it.

If you enjoy Halloween, Tim Burton, or Needless Things, you might enjoy SupportPhantom.com. Huge thanks to our killer Patrons Zack, Gary, Lucas, and Beau!