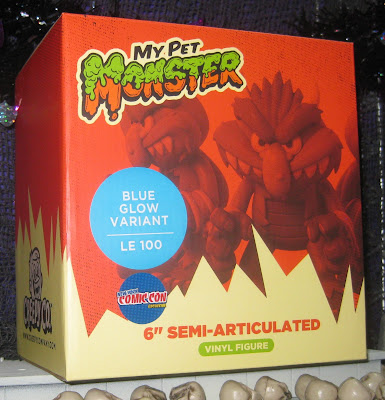 If you don’t know, Creepy Co. is an online retailer that specializes in nostalgia. They produce t-shirts, pins, and all manner of licensed collectibles that pay tribute to the franchises and art styles of decades past.

Last year Creepy Co. celebrated the thirtieth anniversary of My Pet Monster – a plush representative of the golden age of 80s gross-out/monster toys – with a collection of apparel, soon to be followed by a vinyl designer toy.

In general designer toys are not my thing. While I appreciate the artistry, the pricing and number of hoops you sometimes have to jump through just for the possibility of buying one are extremely off-putting. Creepy Co.’s My Pet Monsters are easy enough to purchase, but the price was a bit high for my taste. My Pet Monster is one of the great 80s toys that I never had the first time around (though I do own one of the reproductions that came out in the early 00s), but my passion for the franchise probably hits about the forty dollar mark for a 6” vinyl figure.

At least, that’s what I thought.

While I wasn’t going to pay sixty bucks for their standard – admittedly beautiful – figure, apparently I was willing to pay a lot more for a glow-in-the-dark version. With less actual paint.

Amidst a slew of frustrating announcements from various toy companies for New York Comic Con Exclusives, Creepy Co. released pictures of this GITD Monster and I went nuts. I loved it. And knew that, in all likelihood, I would never own it. The $75 at-con price tag was bad enough, but to get one on the secondary market after the show would raise that price astronomically.

As NYCC was getting underway, I posted a pic of the figure with the request that anyone I know that might be at NYCC grab one for me. I didn’t expect much because social media is generally useless unless you want to get angry about stupid things. But once again Instagram proved itself to be the best of the worst – a user going by @meistershake messaged me from the Creepy Co. booth asking if I wanted him to grab one.

I’ve been following this guy for a long time and had a pretty good feeling that he was trustworthy, so I PayPal’d the money and started counting the days until my new Pet showed up.

Side Note: @meistershake does lots of great toy pictures – humor and otherwise. Go check him out. Also, he charged me MSRP for the toy plus shipping and nothing more. Solid. 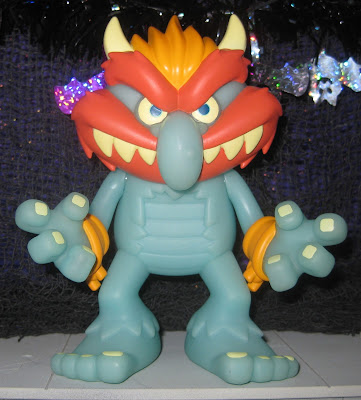 The figure is much larger than I expected. I knew it was around 6”, but it’s much bulkier than, say, a Marvel Legends figure. As soon as I had it out of the box I felt a lot better about how much I spent on it.

To me, this version is much more striking and visually exciting then the standard paint job, despite the reduction in paint apps and even before considering the fact that it glows in the dark. 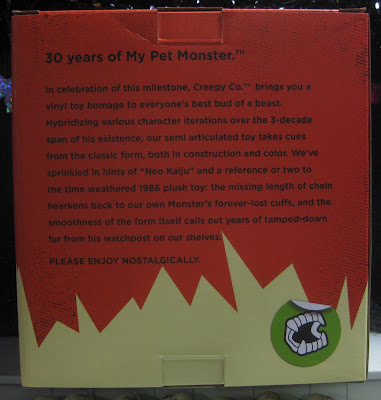 The Monster comes in a large, neat-looking box. I’m a little surprised it isn’t a window box, especially considering that the figure is packed in a plastic clamshell, but I like it better like this. The graphics look great and the subdued colors combined with the garish logo are eye-catching. 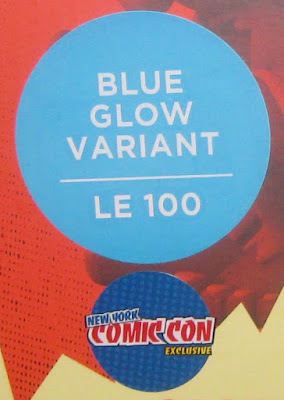 Stickers on the front note the edition size, exclusivity, and the glow-in-the-dark feature.

The back of the box outlines the concept behind the figure, which honestly gets a little over-explainy. If they hadn’t pointed it out I never would have thought about the smooth texture of the sculpt or the lack of chains. Now I’m wondering if corners were cut. I also don’t get the “Neo Kaiju” reference. While My Pet Monster certainly is a “strange beast”, it is decidedly American and doesn’t fit the modern kaiju idea of being massive. I’ve never once in my life related this guy to Godzilla, Gamera, Rodan, or any other famous giant monsters.

I AM SO NITPICKY TODAY. 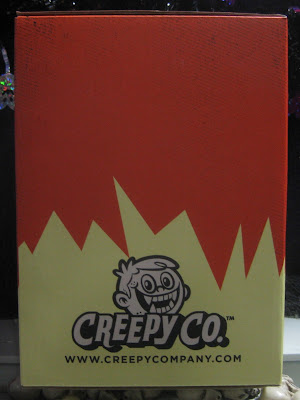 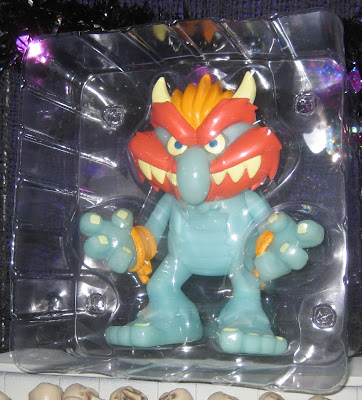 The figure inside is sealed in a thick, sturdy clamshell that is easy to open. 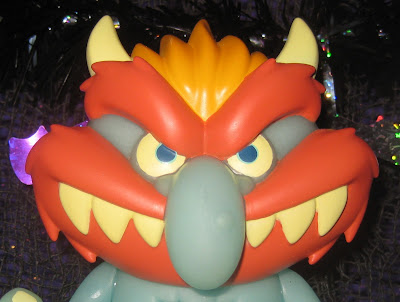 This figure is a thick, heavy vinyl. It’s not going to warp and sag with time.

The proportions are wonderful. The wild head – originally designed by James Groman – was the overwhelming centerpiece of the original plush toy and this figure is no different. It captures the profile of the plush, but blown up to a larger percentage of the toy. Even without the bright, striking paint it would be the first thing you see.

Everything on this figure has a certain geometry and symmetry that define it as an homage rather than an update – it’s all clean lines and smooth shapes that balance each other. Except, of course, for that recognizable mole on Monster’s nose.

The paint apps are tight and clean with no overspray or dripping; as it should be on a pricey collector toy. The colors are thick and bright, the kind of paint that looks solid enough to be the molded plastic. 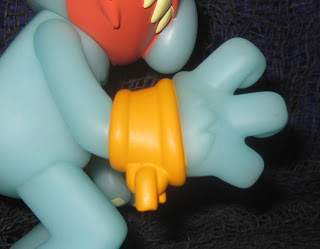 Monster’s arms have the signature orange cuffs with broken chain links dangling down. They’re thick and simple, without the sculpted detail of the original. Some sculpted fur adorns each hand, with painted fingernails at the end of each finger. Again, these are clean shapes without the cracked, jagged appearance of the plush.

The torso evokes the corduroy-like texture of the original’s stomach, with some sculpted fur around it. 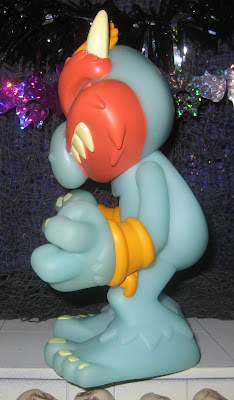 The feet are huge and sturdy – this guy won’t have trouble standing. The sculpted fur around the tops of his feet looks great and the painted toenails match the fingers. 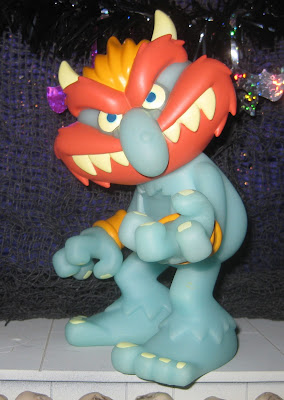 This is a toy, but it also isn’t really a toy. You’ll notice the absence of the usual “Accessories” section. The “Fun” section isn’t going to be much to speak of, either.

My Pet Monster is articulated with swivel joints at the neck, shoulders, and wrists, which is honestly two more joints than I expected. This still doesn’t allow for a whole lot of dynamic posing, but I didn’t buy this figure to go to battle with my Figuarts Harley Quinn. I bought it to stand on my monster shelf and look awesome. And it does that quite well – whether the lights are on or off.

The glow feature is outstanding: 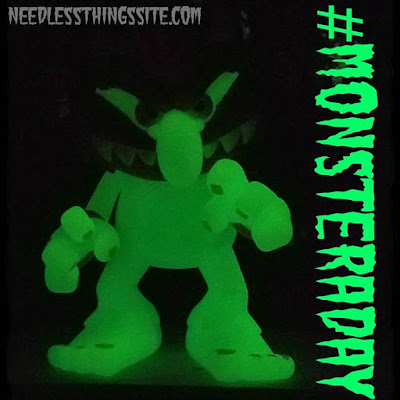 Glow-in-the-dark toys can be hit-or-miss. I’ve got some supposedly GITD figures from Funko that really should have just been called “Translucent Sickly Color That Does Not Glow Even A Little”. This Monster glows brightly and looks great. 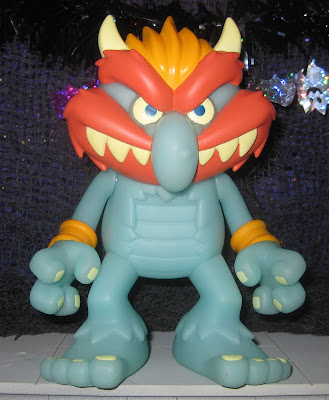 The base price for this version of My Pet Monster was $74.99, which is, quite frankly, outrageous. Feel free to call me a dum-dum or a big mark or whatever in the comments for spending that much (plus shipping). I’m still on the fence as to whether or not it was really worth it, but I’m definitely happy to have this guy hanging around.

I can’t even tell you whether or not you’re the right customer for this, but if you’re on the fence about the regular version and have been wondering about the quality, go for it. It’s great. And you don’t want to be kicking yourself – or paying secondary market prices – when they sell out.

As for this variant, if you need it, may God have mercy on your soul.

If you enjoy 80s toys, monsters, or Needless Things, you might enjoy SupportPhantom.com. Huge thanks to our killer Patrons Zack, Gary, Lucas, and Beau!
Posted by Phantom Troublemaker at 11:00:00 AM