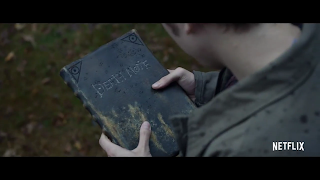 A new live action (and very Americanized) version of beloved anime Death Note has come to Netflix, and I'm watching it just in time for Halloween. Sure imdb lists it as action rather than horror, but take a look at the Japanese death demon that Willem Dafoe voices, and tell me that's not horror. Plus, literally hundreds of people are brutally murdered. A guy getting the top half of his head chopped off by a falling ladder is pretty damn horrifying.

I've never read any of the manga or seen the Japanese movies, but I did see the anime. If you'll recall I even recommended it a while back. So how does this new movie version measure up? We'll, I'm torn on that score. But I'll give a you a little background first. I can imagine that there are plenty of people who've had this pop up in their queue without knowing what it was. Even if I had no idea what it was I'd still be intrigued by the images.

Light Turner is a normal-ish teen (although certainly one with a weird name) until the day that a magical book drops onto his desk in detention. His mother was killed by a hit and run driver who got away with it despite the fact that Light's father is a cop. So he's got more problems than your average teenager, but they all think everything is awful for them all the time anyway. The book is full of rules, and mysterious names. The rules are lengthy and complex, but Light gets some "help" from the demon Ryuk who appears shortly after the book gets dropped into Light's lap. Picture someone's face, write their name in the book, and decide how and when you want them to bite it. Then sit back, and let Ryuk make your evil fantasies come true while your hands remain clean. Physically clean that is. How morally clean they might be is up for debate. 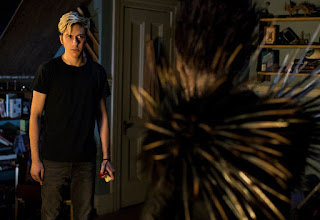 The first death is almost an accident since Light doesn't really believe anything will happen. Once he sees the new power he has he is quick to make use of it, and makes the man who killed his mother stab himself in the face with a huge knife. Very foolishly though, Light decides to share his secret with the rebellious cheerleader he has the hots for. You know she's a rebel because she's a teenage girl who smokes, but I guess she's more goth than she seems since she's all into a nerdy pseudo-murderer almost as soon as he shows her the book. Light decides to use the book for good, and starts taking out killers, kid touchers, and any other bad guy he can find on his father's criminal database. Rather than just sit back and quietly rid the world of assholes, he then decides that building up the character of a vengeful god around his killing spree would be cooler. Thus Kira is created as The Punisher of whatever world this thing is taking place in. He takes out bad guys, but pretty damn brutally even by my standards. The people grow to love him, and even most of the cops are on his side. Except his dad, of course.

Once the killings reach an international scale a special investigator who keeps his face covered and only goes by the name L is called in from Japan. Light can't see his face, and doesn't know his name so he can't kill off L with the book. All this time Ryuk and Light's girlfriend Mia are getting more and more unruly, and kill crazy. To be fair, I'm pretty sure Ryuk was kill crazy before all this began. Things quickly unravel as L tries to discover who Kira really is, and bait him into revealing himself. I won't spoil the ending for those of you who haven't seen it, but shit does get complicated. Complicated for me at least. I watched this with a mild hangover shortly after sitting in an uncomfortable movie theater seat for 3 hours of the new Blade Runner. I was easily confused with all that going on in my head. 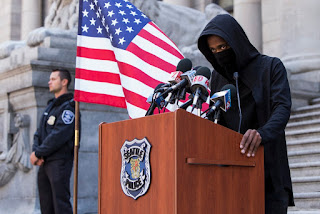 It could also be because Netflix decided to make this into a movie rather than a series or even mini-series. With such a short run time there really wasn't any way to give this property the depth it deserved. Despite the fact that almost no one in the movie is Japanese the cast was good (especially Willem Dafoe). I enjoyed director Adam Wingard's horror movie You're Next very much. I think they just tried to cram so much into such a small amount of time that everything felt really rushed. All of "the rules" the book supposedly lays out early in the movie seem to fly out the window in the back half. They try to play it off by having Light complain about there being too many rules, but if your main character doesn't understand what's going on I'm definitely not going to get it. My favorite parts were the Rube Goldberg style deaths when Light first starts killing. Think early Final Destination movies. That all gets pushed aside as the body count rises ever higher, and we usually only get to see the aftermath of mass deaths. I feel like if we're gonna see that much blood then we deserve to see how it got there.

So I liked it, but didn't love it. The toughest kind of review to write. Should you watch it? There are many many many worse ways to spend and hour and a half on Netflix. I'd say it's worth watching if you love gratuitous violence, Willem Dafoe, or teenage revenge fantasies. If you absolutely adore the manga, anime, and Japanese movies then you probably won't be crazy about it. But since you have all of those things already you likely don't need a shorter, whiter version of this story anyway. I think this is more for people who might have seen some of the anime (or never heard of it before) to find out if there's an American audience for anime titles on Netflix. We're out of comic books to make into movies and TV shows right now. If filmmakers don't take stories from somewhere new they might have to start coming up with original ideas. We know they don't want to deal with all that so I'd guess we're going to see more manga/anime based movies in the future. As long as they don't touch Cowboy Bebop I'll be okay with it. I just hope the next ones get the time and care they deserve.