31 Days of Halloween: Christina Reviews Betrayal at House on The Hill 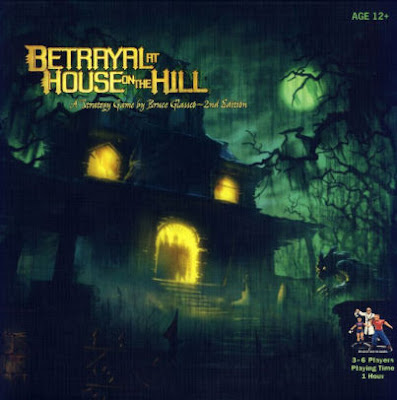 I’m a gamer that likes change.  I like being kept on my toes and like replay value in the form of an ever-changing platform.  It’s why I love Until Dawn (check my review here at Needless Things) because of not only the various endings, but the multiple ways you can get to the various endings.  It’s why I love Final Fantasy VII because the materia gives you the ability to customize weapons and magic in so many different ways.  It’s why I love games like Forbidden Desert  and Dead of Winter because you never know how the game (and game board) will shift and change and who will end up with you, either in your party or even surviving to the final roll of the dice.  I had heard of Betrayal at House on The Hill; I watched it played on Wil Wheaton’s Tabletop show and had various friends recommend it.  But we hadn’t gotten our hands on it until this year’s DragonCon when we snagged it from the CoolStuffInc booth in the America’s Mart.  This was probably the best purchase that we have made all year.

My game review for the Needless Things’ 31 days of Halloween is going to focus on this survival-horror masterpiece that never stays the same and makes sure that no one at the table knows who the betrayer is going to be.  Not even the betrayer themselves. 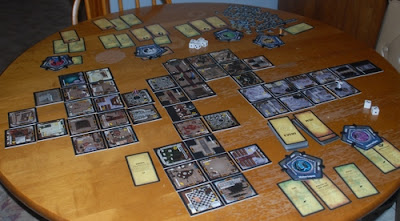 Betrayal at House on The Hill is a survival-horror co-op game designed by Rob Daviau, Bruce Glassco, Bill McQuillan, Mike Selinker, and Teeuwynn Woodruff, and published by Avalon Games Inc. /Wizards of The Coast.  The long and short of it is that you and your friends are trapped in a mysterious and spooky house, trying to solve the mystery as to why and then get out.  Ah, but there is a catch.  The house is fighting back, guided by the hand of mysterious forces that will inevitably turn one of you in the party into their evil minion that will turn on the entire group for the purpose of killing them all and unleashing the evil from the house and into the world.  Muwahahahaha…*cough cough.*  Ahem…need to work on my evil laugh. 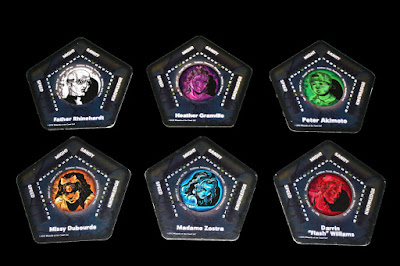 There is no standard open/close type of game board for this game.  The house is built as you play with the aid of a stack of tiles that on the back are marked to designate as being for the ground floor, upper floor, basement, and if you have the game expansion you can have attic tiles as well.  Some tiles function as either or, being marked for example as ground/upper, upper/attic, etc.  When a player gets a turn, the amount of moves they take depend on the stats on their player card, broken down into stats such as Might, Speed, Sanity, and Knowledge.  Speed is the amount of moves you can take, so as you move through the house you can go through the doorways of tiles previously placed, placing another room tile accordingly, building the house.  That is what makes the game so interesting:  the house is never the same.  You never know how the built will be structured so the house will always look different.  This will always affect where other players are going to travel and how the party is split up, which could affect how close or how far apart you are from each other when the final fight occurs.  It keeps this game from ever getting stale. 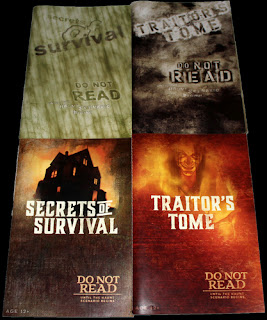 Another thing that makes this game such a high stakes horror-fest is the markings on the picture side of the room tiles.  There are different stacks of cards that you will have to draw from during the course of the game.  I say “have to” because you don’t always want to, trust me.  The marker on the room tile that you draw and place on the rest of the house will indicate what you pile you have to draw from.  And yes, if you dropped the tile you have to draw the card stack; you’re not that special, you little snowflake.  The symbols designate the following decks:  Item, Event, and Omen.  The item deck can be good or bad, depending on what you draw.  For the most part, the items assist you throughout the house.  They can increase a stat, help you avoid a trap, or even help you in the final fight.  The Event card is equally as hit and miss, leading you to be moved to another room of the house, grab a great item, or depending on a good or bad roll of the dice have increased stats or some horrid accident befall you or your teammates.  Ending up in a room with a raven on it, however, gifts you with an Omen card.  A meter stick is given with the game, measuring zero to twelve.  This stack does have beneficial items that can help you later on in the game, however each Omen card drawn ticks the meter up higher.  You have to roll the number on that meter after every increase of its number value.  You have a set amount of dice to roll so the beauty is that in the beginning it can be relatively easy to pass the roll. As the meter ticks upward, however, those numbers get harder to beat.  The challenge is part of the fun, because let’s face it, you hate when the big fight hits, but you also love the action. 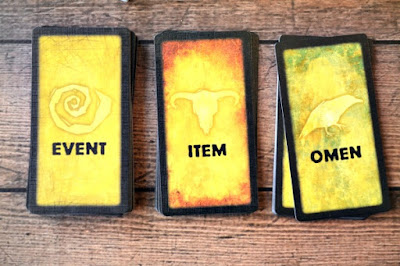 When it comes to the Omen cards and the dice roll, it is all about the pass or fail.  If you pass, the group is safe.  If you fail, then “The Haunt,” begins.  This is where things get sticky.

As you go through the house collecting Item/Event/Omen cards, you gain a hefty pile of goodies that could benefit you later in the game.  You also, however, develop a pattern that, unbeknownst to you or the other players, will determine who is going to betray you all and what causes it.  Think of Clue with Professor Plum in the Library with the Wrench, but yet that combination triggers a horrible supernatural event.  Make sense?  When the haunt roll is unsuccessful, the person who rolled has to look at the Survival Manual to determine what room they are in, what Omen card they last drew, and cross-reference it with a guide in the book that leads them to a specific page in the manual that tells them how the rest of the game will play out.  This will tell them what supernatural event occurs and who the person is amongst the group that is out to kill everyone.  It could be the person that failed the haunt, letting in a house full of cats that are mind-controlling him.  It could be someone else bitten by vampire bat and is now filling the house with the little pests to turn you all.  It always varies, depending on the room, the item, and the person who sucks at rolling the dice.  From there the betrayer takes their book off to the side, named the Traitor’s Tome, to read up on how they have to set up the board to kill everyone.  Meantime the remaining party members read from their book on the strategy they need to employ on how to stay alive.  From here on out it becomes less of a co-op and more of a battle field where the lines are evenly drawn, but with the best storytelling aspects imaginable.  You are already in a house of horror, but when the haunt begins it adds a new level of role-play and general storytelling to the game that invests you more and just ups the stakes. 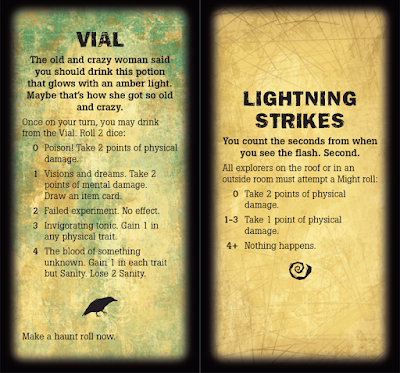 This game has every aspect of gaming that I have always loved.  It has storytelling weaved into the board game play.  The format is never the same, and because with every game everything from the board layout to the storyline itself changes, so you have constant replay value.  The amount of characters to choose from and their varying stats leaves you wanting to pick a different character every time you play to vary your game play and spice things up a bit.  I love games with a defector mechanic, but it usually involves the person picking from a deck or being assigned the role early on and having to keep it secret for the entire game.  This game spins that mechanic on its head and makes it so the person that turns on everyone won’t even know it until it happens.  What game does that?!

I have met some of the writers for some of the betrayer storylines and they thoroughly enjoyed writing these twists and turns and equally love playing the game.  Every time we play this at DragonCon in the gaming hall we have dozens of total strangers coming up and asking to join in on the next round with us.  It’s a hugely popular game and there is a reason for it.  It doesn’t get stale.  No matter how hard you try you will never have the same house and/or the same story outcome.  It can be over as fast as fifteen minutes and then the haunt begins, or it can take hours, with nearly every single house tile being tossed down and your table so full that you almost need an extension to fit the huge build you’ve created.  From game board to story line, time frame to characters, nothing about this game stays the same from session to session.  If you are looking for something that will keep you occupied for many rounds of play and be a storytelling spook fest, this is next purchase I suggest making from your local gaming store.

Do you really want to pass on a game where in one variation you get shrunk into babies by a psycho supernatural nanny?  Come on…you know you don’t want to miss out on that.