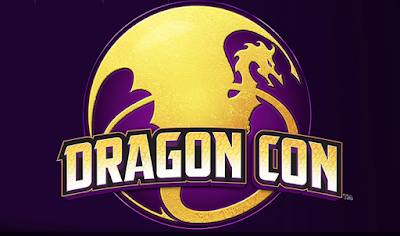 Captains and kilts and big gothic concerts.  Possibly the weirdest tag line in history if you didn’t run in our circle.  But you do, so it isn’t.  This pretty much sums up the highlights of my Labor Day weekend, which I shall now regale you with.  None of us likes Post Con Depression, so let us stay at the Con for a while longer, shall we?  Allow me to take you back there as I recap my personal highlights from DragonCon 2017.


I always arrive at the Con early every year.  I have worked for the DragonCon Store for a while now as part of the Set-Up crew, so being there bright and early on Wednesday morning is the norm for me.  We make the store, well, the store.  We pull out all the stock and all the shelving, put it all together, put up those pretty displays and showcases, and put all the extra stock in the back.  That way all you ‘conners have that beautifully logo-ish goodness to buy and walk away with, including the streaming service and next year’s membership.  So my first two days were spent setting up all those pretties and hanging with some of the most awesome people that the Con ever put in one singular place.  Not that I’m biased or anything… 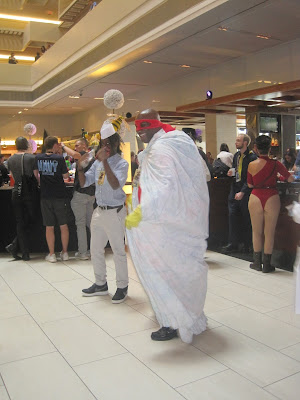 We got up bright at early at 6:30AM on Friday to take care of the three S’s (if you don’t know what those are, I feel sorry for you) so we could be ready to get in line for Nathan Fillion’s morning panel.  Now you see, we are used to lining up extremely early for panels, so we planned ahead.  The “unofficial line” for a guest panel usually doesn’t start until 2-3 hours before the panel, so we got there at around that time.  No harm no foul; we figured that, as it usually does, this would put us in the area of being around the second through sixth row, edge of the side row to roughly the center.  We have this down to a science.  We failed to realize, despite being Browncoats, that our Captain would draw an even bigger crowd than expected.  The line, despite being there that early, was already lined around the entirety of the building.  The entirety of the building, people.  We freaking encircled it.  We were in the back rows by the time we got seated.  It was still a blast, mind you, but everyone in line was shocked.  Shocked, and yet in awe that Fillion inspired this kind of dedication.  It was a tip your hat kind of moment.  Oh, Captain, my Captain.  Did I mention that we found out during this panel that he's friends with Bruce Campbell?  Imagine those two in a room together.  The universe seems like it should implode... 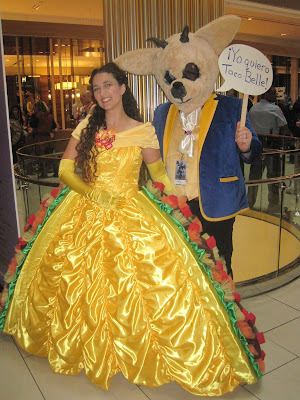 I only sat on one panel this year as a panelist, which was a bit of a change for me and honestly a bit refreshing.  I liked being on the end of being able to attend more panels rather than speaking on them, but I also missed the open discussions and getting in to them.  My one panel this year was on the Urban Fantasy Track, titled “Sanctuary for ALL:  Humans, Monsters, & Everything in between on Angel.”  I truly enjoyed it because it was one of the most endearing subjects to me in shows such as Angel, and honestly most specifically Angel.  We got to dive in to characters ranging from Cordelia to Jasmine, from Wesley to Connor, discussing the gray areas that exist when it comes to what makes a person moral or even a monster, talking about hoe sometimes it can be the human that is the true monster and the monster the most heroic of them all.  We discussed how the character grew, fell, and grew again, and how each of these dynamics was different and refreshing for all.  It was by far and away one of the most intellectually delightful panels I have ever sat on and that says something.

To help out the teen (and humor her with panels she wanted to attend) we attended the panel on Augmented Reality verses Virtual Reality.  I truly didn’t realize that this was as wild and crazy in terms of the work that went in to it until now.  Yes, I’m a gamer so I’m nutzoid over VR, but to know how many other areas of the world use AR and VR?  Social workers, medical professionals, therapists?  It was amazing to hear.  And the technology that went in to it?  Granted, this panel was for the teen, but it ended up making me sit up and go “Well…huh.” 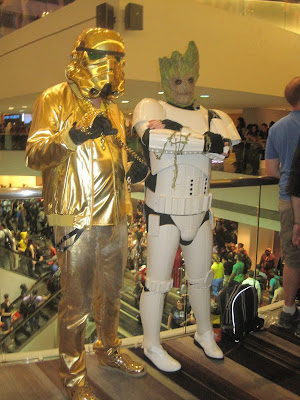 We always spend a large portion of our time on the Filk Track.  Never has their been a track where we have felt more fellowship, inclusion, warmth and general happiness that comes from the people and the music involved.  It’s the most positive environment in the Con to us.  So the Filk and Cookies panel was out first Filk Track stop.  The premise is simple; open filk…with cookies served.  Simple as that.  The table in the back had tons of cookies, including fortune cookies with specially printed fortunes about each of the filkers.  A cooler of various sodas was provided and small buttons were handed out with various superheroes on them by an adorable little girl in a Supergirl costume.  The likes of Tom Smith, Foot Pound Force, Mikey Mason, and the Blibbering Humdingers all sat in on the hour long session, trading songs back and forth in the round as well all ate and sang and talked and joked.  It was all that I love about this Track; a loose and informal environment that is more of a family gathering with music.  One of my Con highlights by far. 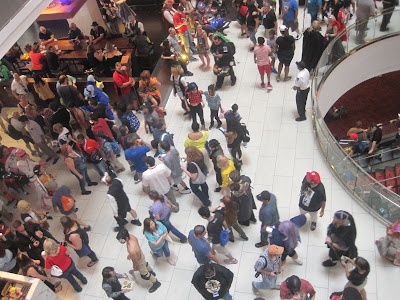 “How The Sword Saved Me” on the Armory Track was a very personal panel for me.  I am a twenty-two year martial artist and it is not a sport.  It is a way of life. To hear the track members share their stories of how studying this art moved them and changes their lives…it brought me to tears.  I ended up sharing my stories in the hopes of inspiring and helping one of the members who was struggling with a life decision that could affect her training future.  It was one of the most emotional moments of the Con for me and to celebrate a moment like that with fellow martial artists is one that I will never forget.  It made me remember how alive I feel when I am training.  I hope everyone finds something out there in the world that makes them feel that alive. 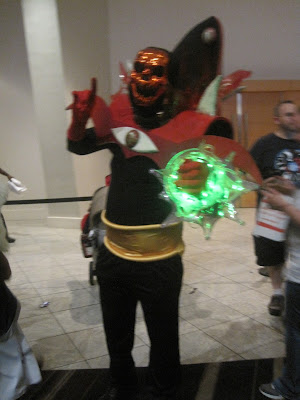 As I said, we spend a lot of time in the Filk Track.  A big draw for us every year is the Firefly Drinking Songs panel.  We were there during its early years, when a small room that fit maybe twenty to possibly fifty people would work.  Nowadays, they need a room in the Hanover Hall of the Hyatt that holds a around one hundred and fifty, with people even lining the walls to get in.  As usual it was a gorgeous panel, with old standards being sang by Marc Gunn as well as new songs from an album he is currently putting the finishing touches on.  And much to my joy I found that he was putting on the new album one of my favorites that he has done at the panel before, whose original version is called “Close Your Eyes.”  A disturbingly hilarious song that leaves me smiling ever time.  Hearing him sing it again left me looking at my husband, giggling in glee, and saying “I can go home happy now!”  Look it up, Browncoats.  It is the best song ever written, and one that Marc himself has said, “This is a song I could see Mal singing to his kids if he and Inara ever got married and had little critters…”