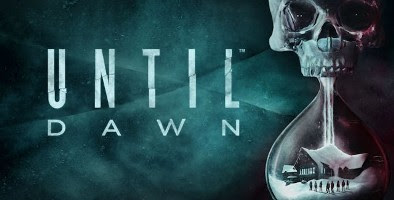 The Fourth of July brought us many things.  A celebration of our freedom, cookouts with family, and fireworks galore.  It also brought us a sale on games for Playstation Plus members that included some games being given for free.  God Bless America.  One such game is one that I had heard of before, yet had never played.  My addiction to Youtube had caused me to hear about it through watching one of my favorite channels, OutsideXBox.  I was curious yet hadn’t given it as much thought beyond the videos I watched on my favorite Youtube channels.  My husband decided to give it some thought, however, because hey… free makes everything better.  I have to say that if this game had been at full price I still would have grabbed it.  It is worth every penny invested in making it and has more replay value than almost any game I have ever played.  The characters not only have very specific personalities, but how you play the game will adjust their personalities… and even yours.  Have you ever played a game that psycho-analyzed you before?  Literally?  If not, you will the second you turn this one on.

I couldn’t recommend Until Dawn any more than I do right now. 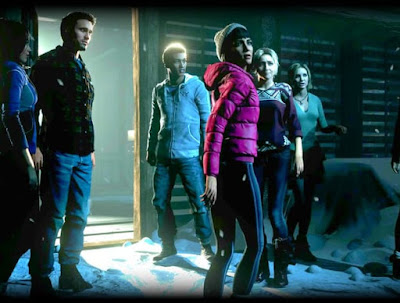 I sat down to give this game a shot after we grabbed it during the Fourth of July PS Plus sale, only planning to devote a few minutes to it before I switched gears to beat the Riddler into submission on Arkham Knight.  Those freaking trophies…they are driving me crazy and have taken me weeks to collect.  Three hours later I was still plowing through Until Dawn and couldn’t turn it off.  The game hooks you from the opening credits and won’t let go.  Let’s start with a brief overview.  Two sisters go missing during a get-away with a bunch of college friends in a family-owned mountain cabin.  In the opening credits you can assume that it is something scary and of an almost slasher-esque nature is behind it all.  The game goes into the opening credits set with a thumping and skin-crawling version of the tune “Oh Death” that the Supernatural TV show fandom was introduced to years before when the Four Horseman came along and Death himself was first seen walking down the streets.  Any SN Family member will perk up instantly at this game’s credits.  From there, the game officially starts and takes place one year later at a reunion of the remaining college group members at the same cabin.  Tensions run through everyone as guilt over last year’s events runs high in everyone, changes have occurred in relationships, and uncertainty in whether or not this reunion was even a good idea are scattering emotions all over the place.  That’s the back-story.  Here is where the game gets really crazy.

You get the chance to play the twin sisters before the credits as well as switching between each of the college kids after the credits throughout the course of the game.  Each one of them has a list of traits that make up their personality, ranging from:  Honest, Charitable, Romantic, Funny, Brave, etc.  These vary in scale depending on the person.  Your actions in the game will make them vary as the game goes on.  I don’t mean something as simple as answering “Yes” or “No’ or picking an answer to a question, as in some platform games.  This game is a Butterfly Effect system.  You can choose to wake up someone for help or find the rest of the group.  You can side with your girlfriend in a fight or the person she is fighting with.  You can accost someone flirting with your lady or believe that they weren’t really flirting.  You can tell someone the truth about what you have discovered or lie to them.  Each action effects their stats, and also effects the relationships with each character.  You can make a person completely hate you or make two characters that are on a rocky path in their relationship become the most solid romance in the game.  And like reality, this won’t stay the same; these personality facets and relationships will change through the entirety of the game.  I know what this sounds like:  “Does this butterfly effect only make this out to be a “shipping” kind of hook-up slasher-flick that warns you not to shack up or you’ll die?”  Oh…so far from it. 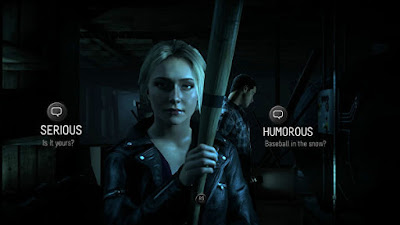 There is an entire panel in the menu screen dedicated to the butterfly effects and how they alter the course of the game.  The slightest action will change the entire course of the game for you.  Failure to give someone a high five will result in a baseball bat being locked away…a baseball bat you might have needed later.  Using a machete and causing it to break into pieces causes a ripple that means you no longer have a workable machete that you could need later on in the game.  Jumping down to save someone’s life who is trapped earns their respect, whereas being hesitant effect their ability to trust you later on.  Even something as simple as attacking a bird sets off a butterfly effect that can change an otherwise trustworthy and humorous character into one that is no longer someone you can put your faith in.  A bird, of all things.  The page keeps track of each effects progress throughout the game so you can see the result of your actions…and how any characters deaths came about because of what you did or did not do.  The “fun” doesn’t stop there.  In the midst of all of the supernatural and slasher-flick horror, the game is peppered with segues into a supposed psycho-therapists office.  You (supposedly as the player of the “game,” not one of the characters) sit with him as he runs you through a series of behavioral exercises designed to “get to the root of your anxiety” and to “enhance your enjoyment of ‘the game’” as it determines what you are afraid of, who in the game that you like and dislike the most, what makes you uneasy and what things in life you enjoy.  Why does it do this, you ask?  Because the game is literally psycho-analyzing you to adjust its parameters accordingly, implanting what you are afraid of into the game.  For example, I marked repeatedly as the image continued to pop up that I was afraid of clowns.  The scarecrows now wear clown masks and characters are being chased by a serial killing SAW type of character, wearing a clown mask.  I said that I was afraid of spiders, so spiders now pop up everywhere I walk, including over the lens of surveillance cameras as I watch any video footage.  It will vary for you depending on what you pick.  In fact, it will vary for everyone every single time you play.  The choices you make in this analysis sub-game as well as with the game itself when interacting with the characters and the various in-game aspects will affect not only the characters and their personality, but who lives and dies and how they die.  There are multiple variations of possible endings to the game.  Only one of those endings results in everyone living by the end of the game. 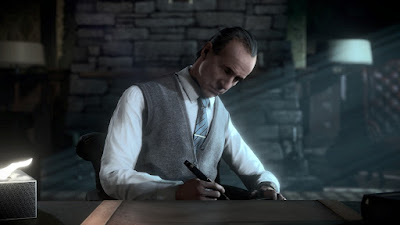 The voice actors sport an amazing cast.  Hayden Panettiere of Heroes and Nashville  fame, Brett Dalton of Marvel’s Agents of S.H.I.E.L.D,  Rami Malek of Night at The Museum and Gilmore Girls, and the list goes on and on.  The best part is that not only did they cast these amazing people as the voice actors, but they were 3D scanned into the game as well.  They were used as the models for the characters themselves and adjusted accordingly for age and hair, etc.  In every way they are the characters in this game.  The game-play itself is also a plus, with only a few mild complaints.  It is not rigid or uncomfortable, handling with a healthy balance between the over-control of later Final Fantasy games to the early days of Resident Evil.  Control is maintained rather easily and the only time that you seem to lose control of the character and its movements is when you speed-walk (the game’s “run” equivalent,) or if the camera angle insists that you move in specific directions and your body seems to “side scroll” at odd angels, which doesn’t happen often.  The game has many quick-time events, which I am often bothered by.  This game, however, keeps quick-times from being a bother.  It actually makes then a necessity.  The fact that your actions affect the outcome of the game make the quick-times a necessity and make you curious as to whether or not you want to press that square or triangle just so you can see what ending you will get.  The game speeds up these quick-times to twice that of what most games are, forcing you to rely on not only your reflexes, but also your instincts.  Make your choice and make it fast because if you don’t it could very well lead to someone dying…and not necessarily the character you are playing.  Falling off a log in one part of the game could lead to a person getting slaughtered in another part of the game seconds later, all because you were too late to reach them.  Butterfly effect. 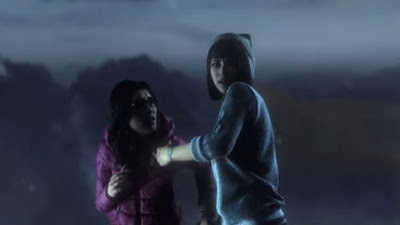 One user on the GamesFAQ board broke down the different play through possibilities to confirm how the possible endings can be achieved and how many routes you can take to get there.  This was the user’s math: 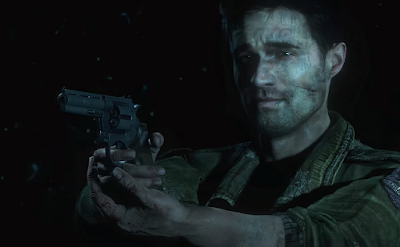 This total number equals 256 possible ways to achieve 8 different endings in the game.  That is 256 different times that you can replay this game to get the endings in various ways to achieve your goals, including use these methods to unlock bonus content and achieve in-game trophies while yet not letting the game go stale.  Let that reality sink in for a minute.  All of this while the game itself is adjusting to compensate for your play style based on how you answer the “psychologists’” questions.  It doesn’t get old.  If you missed the free download in the Playstation Plus store then I highly encourage you to at least rent it or buy it outright.  It’s the last game you will ever get bored playing.  Just please…play it alone at night with the lights off.  It’s the only way to play a game like this.