Game of Thrones Season 7 - It Begins 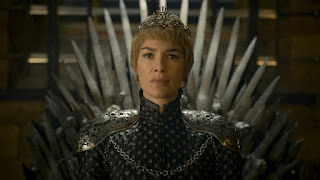 Hey did you guys know that Game of Thrones season 7 started? Crazy right? It’s like they just sprung it on us out of nowhere when we weren’t even expecting them. HBO really needs to fire whoever is in charge of marketing this show because I heard nothing about it at all.

But seriously, there was so much in the first episode that I feel like I need to watch if again (or a few more times) before I can really dig into things, and start over-analyzing shit. I’ve been trying to steer clear of reading spoilers, but I always enjoy a crazy fan theory. Given that a lot of the fan theories turn out to be at least partially correct that may not be the best idea, but it’s all theories until the show proves them true. I’ve read some wacky stuff so far because every other link on Facebook takes you to an article about what someone thinks is going to happen next on Game of Thrones. The craziest one gave reasons for why just about every single character could be “the Prince that was promised” by the Lord of Light. As I've said before, Davos is a righteous dude, but he’s no savior. Nor is it Jamie or Tyrion Lannister, Daenerys, or The Hound. Sure, it could probably be anyone since Melisandre can’t seem to make the right pick to save her shriveled up old life, but it could also be a storyline that’s dropped altogether with everything else that’s going to have to happen in these last 2 short seasons. I did read one fan theory involving the dragons that seemed both plausible and terrifying, but again, until these things happen it’s all just conjecture. Except for Stannis being alive. I hate to break a friend's heart, but he's not coming back man. 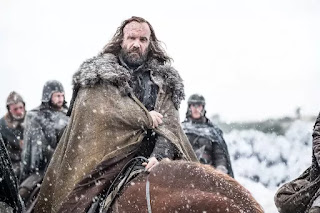 The Hound is spending too much time with Thoros and his man-bun if even he’s starting to see shit in fires. The Lord of Light must be a pretty persuasive deity if he can win over the man who regretted not raping Sansa when he had the chance. Although, I guess we’re supposed to forget about all that since he’s redeeming himself or whatever now. Not to beat a dead horse, but seeing visions in flames does not make you some fire god prophecy guy. If I had to chose between The Hound getting down with the Lord of Light, and seeing the Clegane-off that everyone else seems to be clamoring for, I’ll take the former. I just don’t think the brothers fighting out their issues has any relevance to the story. All it would do is settle some bets about whether a giant zombie knight could take down a pissed off burned guy in a fight. With such a small amount of time left in the series I can’t say that a dudebro betting pool is at the top of my priority list. 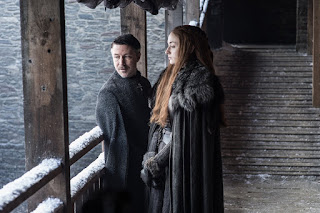 And if I may switch over to Sansa for a moment (she hasn't earned more than a moment yet): they’re so heavily teasing a rift between her and Jon that it almost seems like it won’t happen. Or in any case happen the way we think. It’s too easy, and this show rarely does what we expect. Unless they're just getting lazy. Maybe she’ll finally tell Littlefinger to fuck off (which she kind of just did), or kill him, or let Brienne kill him. Some people think Arya is going to do the deed, but he’s not on her list, and hasn’t actively been trying to do her in. The actor who plays Littlefinger did say in an interview that he thought that his character would have recognized Arya back when she was working for Tywin Lannister at Harrenhal, but didn’t say anything. We know that Littlefinger chooses the best time to make his moves, and surely that information would have been useful to him sometime before now. Either way Littlefinger seems like a survivor so he’ll probably just make a run for it before it comes to that. 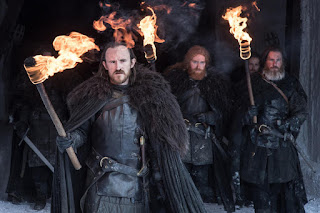 And now on to Bran. Because when I thought about it I discovered that I actually had a lot to say about him. Nothing good mind you, but a lot to say none the less. With him finally back at the wall we have a reason to care about what happens there again. I like Edd, but he’s not enough of a reason to care. Neither is Bran being there, but at least things are about to get interesting. Interesting as in, Bran is going to get a whole lot of people killed. His connection to The Night’s King got the Three Eyed Raven, the Children of the Forest, Summer, and Hodor all killed. Now that same connection will likely allow the Night’s King to follow Bran through the wall, and let that scary as fuck army into the Seven Kingdoms. So not only will Bran be responsible for the final members of the Night’s Watch dying, but is also culpable for the deaths of everyone who gets picked off by a White Walker (have you noticed that everything and everyone on this show has a title of some kind? I can barely keep track of when I’m supposed to capitalize something). And when you really think about it Bran is the cause of just about everything bad that’s happened all the way back to the beginning of the show. I know a lot of people say (hell, even Sansa said it) that the pointless honor of the Stark men led them to their deaths. While that’s partially true I think Bran led them, and a ton of other people, to their deaths as well as causing a lot of the trouble most of the characters find themselves in now. 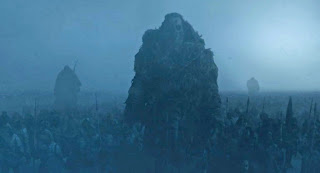 If Bran hadn’t seen Jamie and Cersei going at it Jamie wouldn't have thrown Bran from the window. Ned and Catelyn wouldn’t have felt compelled to go to King’s Landing to look for answers, and never had the opportunity to put themselves under the sway of people who had more power than them (which is pretty much everyone in the castle). Ned wouldn’t have uncovered anything about Jon Arryn’s murder, and had no reason to confront the Queen. If Bran hadn’t whined like a little bitch to keep the dire wolf cubs that Robb found then Nymeria wouldn’t have been around to attack Joffrey, and the Hound wouldn’t have killed Arya’s friend which started her down the road to bloody vengeance. Bran agrees for his brother and friends to leave Winterfell when Theon invades, and poor Rickon later gets captured, then killed because he wasn’t raised at home by parents who could have taught him to run serpentine. But then Ramsay Bolton also wouldn't have been able to take over Winterfell in the first place because Roose Bolton wouldn't have become Warden of the North. There's a bunch more, but let this serve as a jumping off point for you to think about all of the things that Bran has ruined. His body count is stacking up higher than basically any other character in the show (well, before Cersei blew up the sept I guess). Plus, he broke Hodor's brain. Fuck that kid. 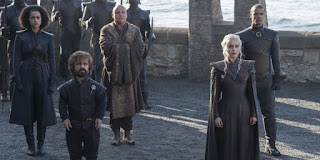 I could go on and on, but as I’m writing this before the second episode even airs I know that I’ll have plenty more to say very soon. By the time my next post goes up we’ll be three episodes in, and I’ll really be able to see not just where the last seasons of the series are heading, but also have a better idea of just how many of the crazy fan theories might actually turn out to be true. There will also be 100 more of them by then too though so I’ll try to keep up. If only my social media feeds were able to provide me with some sort of direction on where to find things like that. Or offer me five quizzes a day that will tell me what family I’d belong to, or what my job would be, or how I would die, or some other random nonsense in the Game of Thrones world. Oh well, I guess we can’t expect social media to do everything for us. So I’m off to be the Hand of the King (from house Tully) until a dragon eats me. If I manage to survive I’ll be back to talk more GoT soon.