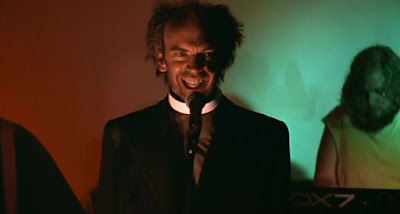 There is no objective reality. Each one of us has a unique mind with it's own way of interpreting it's surroundings. Not only does the processing of information vary from person to person, but we each have our own unique experiences. Some of us were raised in rural areas, some in cities, some in Amazon jungles. All of these factors create a version of reality that is exclusive to each person. Some people think they were created by god/gods. Some people believe they were created by aliens. Some believe they exist through a random, natural occurrence. Currently this country is experiencing varying versions of reality. Some see a threat of white supremacy and intolerance taking over, while others see a coordinated effort to limit free speech and allow nefarious forces to obliterate traditional values. Those are just two ends of the spectrum and there are plenty of other views in between. Today's film explores a subjective reality that is drastically different than any of us have experienced. A reality that has been intentionally shaped by outside forces, isolation, and cognitive deficits. Let the madness begin.


I don't really watch many comedy films. It's definitely not my favorite genre and modern comedies tend to make me go cross-eyed and lose brain cells. When I do venture into comedic territory though, I always go for the dark comedy. There's only so much time in a day and I prefer to spend my time viewing the more disturbing cinema out there. I stumbled across this bizarre Australian film, directed by Rolf de Heer, several years ago and found it fascinating. Some of the images from the film have been burned into my mind. I've heard pretty much the same feedback from others who have seen the film.

Not only is the film humorous and disturbing, it's also thought provoking. It made me wonder about my own perception of the world around me and what forces may have influenced it. I started thinking about art and music and how it never reflects how things are, only how things seem to the creator. I recalled listening to Robert Anton Wilson and how he promoted writing/speaking in E-Prime. E-Prime is a style of verbal or written communication that conveys the writer/speaker's experiences and opinions instead of strict judgements. This is to keep the reader or listener from confusing opinion with fact. Assuming everyone is experiencing reality in their own way, there are no facts.

Perhaps I was reading way too much into the themes presented in the film. The previous statements may very well be some abstract, philosophical diarrhea. Regardless, the film stirred my brain
to such a point and has become a favorite of mine. For any fans of the Scooby-Doo live-action film, Old Man Smithers is the star of this....and he shows his penis. That's what kind of unexpected weirdness you'll have to expect from...

Nicholas Hope plays Bubby, a very challenged 35-year-old man-child. Bubby lives with his mother in a small apartment which he is never allowed to leave. He has never known his father and has developed a bizarre relationship with his mother. Despite being an adult he acts extremely immature and even has to be bathed by his mother. His diet mostly consists of bread chunks in sugary milk, which he seems to enjoy too much. He's kept in a constant state of paranoia because the air outside is lethal. His mother leaves at times, but only while using a gas mask. The beginning of the film has an unexpected, post-apocalyptic, vibe to it.

We're trapped in this apartment with these two for about 30 minutes of the film. The strange relationship gets even weirder once the mother strips nude and requests sex from her son. It's very unusual to see a woman this age take part in nude sex scenes, but you'll get more than enough here. This may seem outrageous to most people, but for Bubby it's just another day. This is what he knows and has no reason to think there's any reason to question it. He's incredibly naïve and has little or no understanding of death. After mimicking the house cat for a bit, a very controversial scene occurs where he uses a roll of shrink wrap to wrap the cat's entire body up tight. A real cat was used, but allegedly it was put down humanely prior to the scene. It's still quite an intense and brutal scene to watch. This may be the part where most people turn the movie off.

After killing the cat, Bubby still doesn't quite understand what he's actually done. As far as he knows he's just immobilized the feline and still carries it around like a pet. One day his father returns home after 35 years and is dressed like a priest without a gas mask. His father gets back together with the mother which changes the dynamic of the household. They see Bubby as a burden and decide to kick him out of the apartment. Bubby doesn't take kindly to the news and decides to shrink wrap his parents too. Shortly after, he apprehensively journeys out through the apartment door.

It turns out that his mother had been lying about the poison gas in the air and the world is operating as we know it. For Bubby though, everything is new and strange. He doesn't know how to act in this world and usually mimics people's words and actions. He runs into some Salvation Army carolers who he is amazed by. He approaches the females and he greets them like he would his mother, by grabbing their breasts. They end up showing pity on him and take him in for a bit. One of the women ends up having sex with him while singing about Jesus. It was pretty hilarious and I'm still trying to figure out how he gets laid as much as he does.

Bubby has many other humorous encounters throughout the film and eventually gets picked up by a traveling band. They take a liking to his bizarre nature and let him travel as a roadie. Bubby is fascinated by the music they play and is extremely happy to have found friends. They come to find out that he killed his parents and is still carrying around a dead cat. Bubby doesn't understand the critical nature of his actions and they recognize that. Instead of turning him over to the police they drop him off at an artist's house. He gets a quick makeover and ends up sexually assaulting a woman in a restaurant. Of course that means he's going to jail where there's a bizarre, bagpipe, butt rape scene. Not that he was raped by a bagpipe, but there were men playing bagpipes in the corridor while an inmate rapes him. 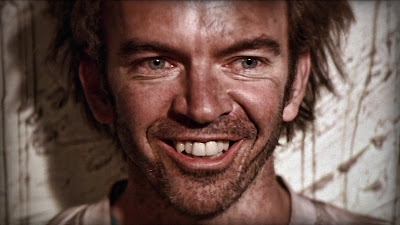 He is eventually released into the wild once again. He encounters a series of people they feed him conflicting political, scientific, and religious views. Bubby is a blank slate and soaks up everything like a sponge, whether he understands it or not. He gets a priest outfit that reminds him of his father, which he wears for the rest of the film. Then Bubby hears some familiar music from a club and rushes in to reunite with the band that had abandoned him. He jumps on stage with excitement and they decide to put a microphone in front of him as a joke. Bubby starts repeating all of his experiencing in an abstract, musical presentation. He hisses like his cat, revs up like the cars he's heard, repeats his father's dialogue as well as others. It's like he doesn't have his own identity, he's just a dirty, mirror image of everything around him.

The impromptu performance is a hit and Bubby ends up touring with the band. It becomes a sort of musical performance art. The audience interacts and Bubby has props representing different things in his life, like a blowup doll with a gas mask on it. I actually really liked the strange musical act. It reminded me a little of The Doors. It's a very psychedelic and atmospheric style of music with chaotic spoken word accompanying it. It was a ridiculous and disturbing journey for a lonely, confused man to get to this point. For 35 years the world didn't know he even existed, and now he's winning the world over.

This film smashes together various ideologies into one retarded character. It's definitely one of the stranger films I've seen, but it's also a quality film. It's a great script with great performances and excellent cinematic execution. I did find the first 30 minutes more intriguing at first and was a little disappointed when he left the apartment. It was a dismal atmosphere they created for Bubby's home and the masochist in me kind of enjoyed being in there. I've come to appreciate the rest of the movie even more, however, as I further examine the philosophical questions it arouses. The disturbing elements may drive some viewers away, but it's definitely worth watching all the way through. There are plenty of things I have left out that you need to see for yourself.

IMDB score for Bad Boy Bubby is a decent 7.4. I would go ahead and raise that to an 8. Unfortunately the US bluray release from Blue Underground is out of print. I recently got a region free player though, so I will be buying the Australian release by Umbrella Entertainment soon. For those not wanting to buy, you can rent through Netflix and I certainly recommend that you do. That's all I've got this time, but make sure you check out what I have in store next time in Devlin's Domain.

About Me: I have a couple of different aliases, but for this column I will use my middle name. I am Devlin and I currently reside in Atlanta, GA. 33 years of age and still feeling immortal. Former Rockstar, current Pro Wrestler and hell, I'm still a Rockstar at heart. I got my first taste of obscure cinema when I was about 8 years old. My Dad would take us to the video store every weekend to stock up on classic horror films to watch on his projector. They were mostly harmless, PG-rated horror films like the great Universal monster movies. Then one night he rented a movie for himself to watch after we had gone to bed. I was so intrigued by this film that I wasn't allowed to see. I begged and begged and he eventually caved. That night I was exposed to a film unlike anything I had seen before. Ever since that night I wanted to find more films that gave me that same sensation. I wanted to feel shock and disgust. I found my place in the Horror aisle. The film I watched was Faces of Death. Thanks Dad.
www.facebook.com/DevlinsDomain/
www.facebook.com/DevlinValek
Posted by Devlin at 11:30:00 AM