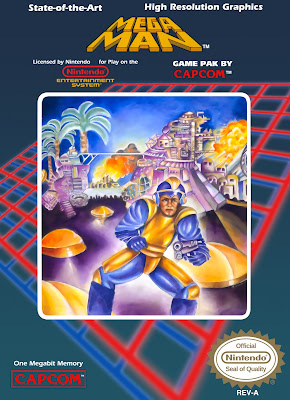 On episode 167 the Needless Things Podcast we talked about the pop culture of 1987. We recorded a similar episode last year about 1986 (and will do another one next year about 1988 – see the pattern?) and I accompanied it with posts about the toys, music, television, and movies of the year.

It all started out as one post, but as I poked around my memory (and the internet) I realized that there was simply too much great stuff to include it all in one post. At first glance 1987 seemed a bit leaner in terms of pop culture awesomeness, but then I started poking around and discovered that roughly 8,000 absolutely incredible movies came out in 1987, so that was one huge on its own.

Naturally posts on television and toys followed. Today I’m looking at the middle ground between the two that has become such a staple of pop culture, but that back in 1987 was essentially still in its infancy – video gaming.

I’ve written about the Nintendo Entertainment System before, but I could probably write a post a week about the NES for the next decade and still not convey how much I loved that thing. The main thing that you need to know is that my parents absolutely would not spend money on an NES for me, so I had to save up and buy it myself. I can’t find exact figures, but I know that I bought the light gun set that included the Super Mario Bros./Duck Hunt cartridge and the light gun. I believe it was $150.

That translates to roughly $340 in 2017 money. I know I did chores around the house and saved Christmas and birthday money, but I do not know how long I saved. I do know that $150 would have bought a lot of GI Joes.

This video game system was very important to me, is what I’m saying.

1987 would have been the second year that I owned a NES. Thanks to several jobs in the video game industry, I have played almost every single game that was ever released for the NES, but to keep things nice and nostalgic the games I’m mentioning today are the ones that I actually played thirty years ago. 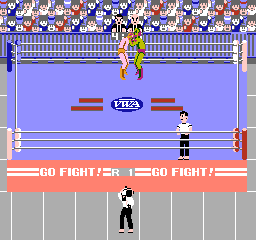 Pro Wrestling – I never truly loved this game because I wanted it to be WWF guys.
However, the gameplay was far superior to any licensed WWF game that would be released for years. In hindsight, I feel stupid for thinking that any game featuring a fish man devouring his opponents’ faces in a shower of gore was anything less than top notch.

I don’t know that I ever played this game alone. It was always one to play with friends. I’m pretty sure this is where I developed my shit-talking skills. I’m also pretty sure they haven’t evolved since then.

Slalom – I recall playing this at a friend’s house and thinking that his parents must not like him very much to have bought this turd. 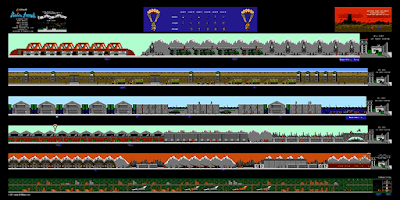 Rush'n Attack – I sucked at this game, but I sure did like it. I would pretend the character was Flint from GI Joe and that he was infiltrating a COBRA base. With a knife. 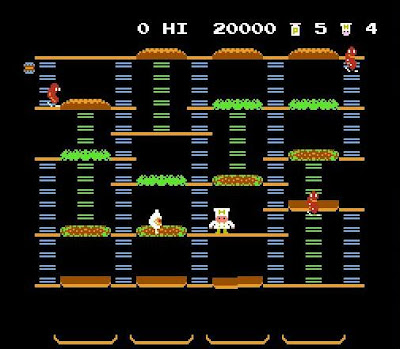 BurgerTime – I’m cheating here. I don’t think I played this on the NES back in 1987, but BurgerTime is one of my favorite arcade games. I prefer it to Donkey Kong or Mario Bros. or any of the other “climb shit and avoid enemies” games. I love the giant burgers and the evil anthropomorphic foods and I think chef Peter Pepper is criminally underrecognized in the annals of video game history.

Castlevania – At the age of eleven I was just hitting the prime age for getting into horror. I loved Dracula and castles and medieval warriors that used a whip for some stupid reason. A friend of mine had this game before I did and I bugged the crap out of him to play it any time I was at his house. I think I might have even been content just to watch him play it because at the time the graphics were pretty advanced and there was an amount of suspense involved in exploring.

This kid’s parents clearly loved him more than Slalom guys’ parents did. 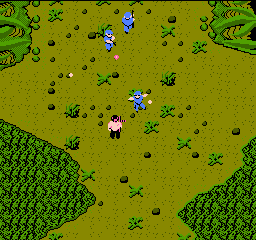 Ikari Warriors – I never actually owned Contra for whatever reason, but I did own Ikari Warriors. As such, I have spent the last thirty years claiming that I preferred Ikari Warriors. I think it’s time to finally come clean and admit that Ikari Warriors, while a fun 2 player game and not at all a bad entry from SNK, is nowhere near as good as Contra.

I’m sorry, Vince and Paul. I feel like I’ve betrayed a couple of old friends.

Kid Icarus – If I were to make a list of my top ten favorite video games (coming soon to a slow Wednesday on Needless Things), this one might be on it. It would certainly make a Top Ten NES games list. Being a huge Greek mythology nerd, I was obsessed with this one, though I never understood why the kid’s name was “Pit”.

This one is usually recognized for being incredibly difficult, but to be honest I didn’t find it to be any harder than most other NES games. Of course, I wasn’t very good at any of them, so I was starting from a different base, I guess. 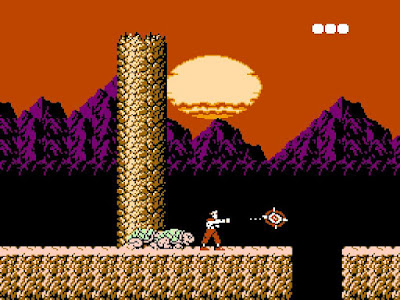 Rygar – Another top ten entry. While it was unusual for the home console version of a game to be better than the arcade version, this was absolutely the case with Rygar. A relative bought me the game at some point and I was hooked, big time. The leveling up was satisfying and it was the first game I played that alternated so successfully between a top-down view and side-scrolling.

Years later I would play the arcade version and was massively disappointed at its simplicity and lack of innovation.

In 2002 a modern version was released for the PlayStation 2 and it was awesome. It’s one of the few game releases that I got genuinely invested in at the time because I was working at GameStop and pretty cynical. But I still loved the NES Rygar and was nervous about how it would be updated. As far as I’m concerned, Tecmo nailed it. I would love to see a new PlayStation 4 version. 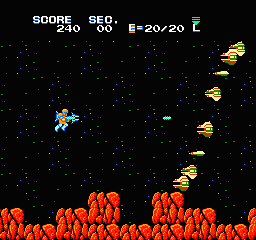 Section Z – I generally hate side-scrolling shooters, but I remember enjoying this one. Maybe because it was a little dude instead of a spaceship. My little dudes were important. Still are, really. To this day I don’t like games where you don’t see a little dude running around on the screen.

The Legend of Kage – And, oh man, no little dudes ran like Kage! This one felt straight out of the Kung-Fu movies I was starting to discover at the time via the magic of Kung-Fu Theater on the USA network. For the time, the bamboo forest visuals were quite beautiful.

Metroid – One of the greatest video games of all time and definitely a top franchise. I am, however, ashamed to say that I didn’t appreciate Samus’ adventures until I played Super Metroid. The first time I saw Metroid in action I thought that the graphics were boring and ugly and I wasn’t interested after about ten minutes of play. It wasn’t until 1994 when I became obsessed with the sequel that I decided I had to go back and play the original.

The Legend of Zelda – Oh, man, this isn’t going to make me popular with Beth.

I thought The Legend of Zelda was so lame the first time I saw it. I thought Link looked stupid and it seemed like just a bunch of wandering around, getting attacked by dumb-looking creatures. Not even the funky fresh TV commercial could sell me on this one:

I wouldn’t truly sit down to play Zelda until 1995, when I was managing a Video Game Exchange and playing basically every NES game ever released because we were encouraged to play games on shift so we’d know about them. 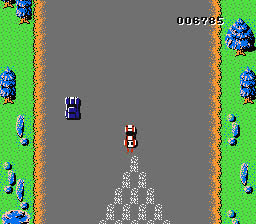 Mike Tyson's Punch-Out!! – The only reason I mention this title is because it is one of the most popular and best-known video games of all time. I didn’t like it then and I still don’t. Not my cup of tea.

Mega Man – I think this was the first video game franchise that I was truly devoted to, due both to the excellent gameplay and the frequency with which Capcom released them. Aside from 1989, they were annual for years following this one.

The platforming alone, while challenging, would have been enough to guarantee mild success. But on top of the tight gameplay Mega Man featured the great gimmick of obtaining your defeated enemies’ powers and the top notch graphics that Capcom was known for.

This first entry into the legendary franchise was a game-changer for many of us, as it showed a new level of quality in a market full of generic and not-great action platform titles. 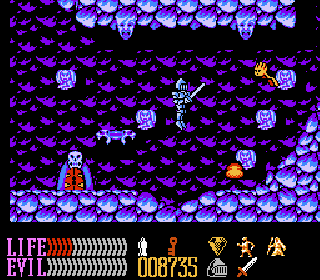 Wizards & Warriors – I always used to get this game mixed up with Ghosts N’ Goblins. Even right now I can’t remember which one I preferred or which one had the annoying “sliding” effect when your ran around.

Otherwise, I just remember this being incredibly difficult and one of those games that I’d pull out and struggle through the first level and then quit.

Did I miss anything? What was your favorite video game from 1987? Let us know in the Needless Things Podcast Facebook Group!


If you enjoy cutting edge 8-bit graphics, the 80s, or Needless Things, you might enjoy SupportPhantom.com. Huge thanks to our killer Patrons Zack, Gary, Lucas, and Beau!
Posted by Phantom Troublemaker at 11:00:00 AM