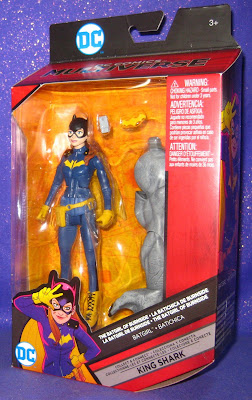 Mattel has been making some interesting character decisions with their Multiverse line lately. A mix of modern comic book looks and TV and movie characters has revitalized the style once called DC Universe Classics and made something old seem new again.

Of course, not everyone wants movie and TV figures and not everyone wants the comic-based figures. I can’t quite figure out which side is doing better, but I feel like I see slightly fewer comic figures just hanging around. I suppose that’s inevitable, though, with entire waves of figures based on Suicide Squad and Wonder Woman.

I’ll tell you this – if that Wonder Woman wave had offered a slightly different character selection I’d probably have an Ares on my shelf right now. If Mattel had replaced Menalippe with Antiope and shown us that a second wave would include Dr. Poison, General Ludendorff, Charlie, Sameer, and Chief I might have found them irresistible. Despite the fact that I’m determined to not buy movie figures from Mattel.

They aren’t great with likenesses.

I’m much more interested in the comic book characters, this King shark wave in particular. I already reviewed the Jim Gordon Batman and was pretty happy with that one. It was inevitable that I would pick up this Batgirl; despite the fact that I already own DC Collectibles’ fancy Icons version. I’m a huge fan of Barbara Gordon and this costume in particular. I don’t mind buying two of the same look if they’re different and good enough. In an odd way I found the Icons version lacking (possibly the fact that I don’t collect the Icons line, which leaves her alone and odd on the shelf), so I was hopeful that this one from Mattel would give me whatever it is I wanted. I waited for the price to be right on Amazon and Bought It Now.

I immediately filed this figure under “better than average for Mattel”. Right off the bat (pun intended) there appear to be more paint decos and they look pretty darn good. The figure’s profile is also nice. Add in two accessories(!) and that huge King Shark arm and I’m feeling pretty good about this one.

It’s important to note that I am rating this Batgirl as to how good it is within the design and style of what Mattel does. I’m not holding it to the standards of DC Collectibles or Mezco. When I review things, the idea is, “How successful is this for what it is?”, not “Is this the best toy available of this character/thing?” 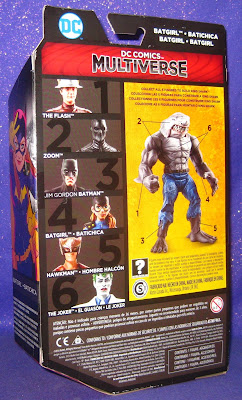 The now-standard DC Multiverse box looks nice. Apparently window boxes are the new norm for 6”(ish) action figure lines, and I’m okay with that because they look good. I do wonder about cost effectiveness, but in a post from long ago our pal Toy Guru assured us that ultimately the packaging didn’t have anything to do with the amount of money that went into the toys. I’m not sure I buy that, but he said it, so I can sleep at night.

I still dislike the fact that everything has twenty different languages all over it now. No matter how fancy the aesthetics are, toy packaging just looks junky and cluttered because of this.
The back features a list of the figures in the wave – something of a novelty now – and a nice picture of the assembled King Shark figure. It was a smart move to make that the centerpiece of the cardback because it truly is an impressive figure. 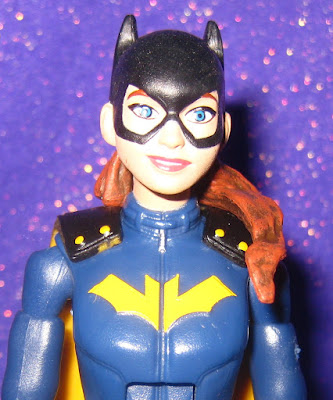 Obviously this figure isn’t based specifically on the art of the phenomenal Babs Tarr, but it does look slightly cartoonier than the Icons version, which is fine because it’s going on the DCUC shelf. The figure is small, as it should be, and features quite a bit of unique tooling.
The boots, skirt, torso pieces, gloves, and obviously head and cape aren’t going to be much use to Mattel on other figures. They’re pretty specific to this Batgirl. Maybe those gloves could be used elsewhere. Whatever the case, I’m impressed.

The head looks wonderful. I know that this Batgirl is most often drawn with her hair over her shoulder, but I’m not sold on the idea that the figure should be sculpted this way. It doesn’t look totally right and it messes with posing. But in this case it’s okay and as long as you don’t get too close (like the above picture) it looks good. The shape is nice and the color, while not as red as I’d like, is as red as toys tend to get.

The cowl has a great shape and is defined quite nicely against the face. The face is one of the best Mattel has produced in this style. The paint on the eyebrows, eyes, and mouth is applied as precisely as Mattel has ever done, but the sculpt on the mouth is what sends this one over the top. The figure has this smirk that is so Burnside Barbara. It’s one of the most subtle and great things I’ve seen from this line. That’s not to say that Mattel hasn’t managed specific facial expressions before, but this one stands out. 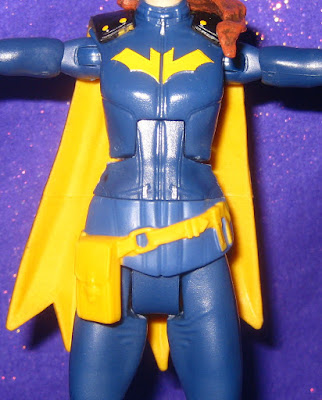 I have to admit that some of the upper body joints on this figure are a bit ugly. The shoulders, biceps, and abdominal joint mess up the profile. That being said, the detail of the torso is nice. It has the seams and zipper of a jacket and the Bat symbol is sculpted rather than just painted on. The yellow is bright and not splotchy at all. I like the fact that the closure was left unpainted since the zipper bifurcates the symbol. I’m also impressed that the zipper pulls on the pockets and closure are painted silver. Those little details add a lot to the appearance of quality.

In the pictures the piece that represents the bottom of the jacket doesn’t appear to match the color of the rest of the suit, but in person it looks fine. The sculpt is noticeably softer, though. The utility belt portion has plenty of sculpted detail and hangs at the right angle. The paint is a bit sloppy in places, but it’s so minor as to not be noticeable “on the shelf”. 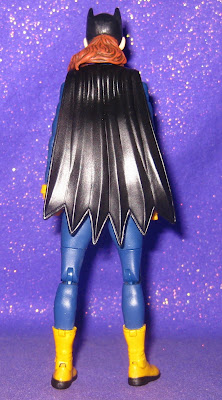 The cape is sculpted the same as most of Mattel’s Batman capes – with the scalloped ends – but shorter. It looks good and has sculpted and painted buttons at the shoulders. The black and yellow are bold and nicely separated.

Batgirl’s upper arms are generic and may well be used for other figures, but the forearms do have a bit of sculpting to suggest a jacket. The gloves have the folded down wrists and look like they’re supposed to. The yellow unpainted plastic looks a bit cheap, but I think that’s more because that’s just how yellow plastic looks. If there was a wash it would have stood out from the rest of the figure. 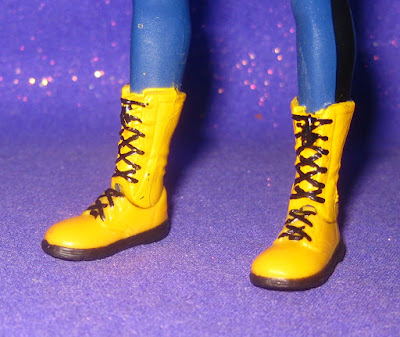 The boots have a nice, detailed sculpt. The laces and soles are painted black, which looks great. There’s a tiny bit of slop around the boot tops and the laces, but no big deal. There are black stripes painted down the side of either leg that I, for some reason, chose not to take direct pictures of. The applications are clean and straight. 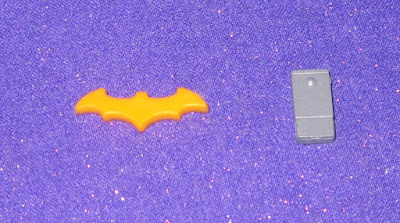 Batgirl comes with a Batarang, a cell phone, and King Shark’s arm. 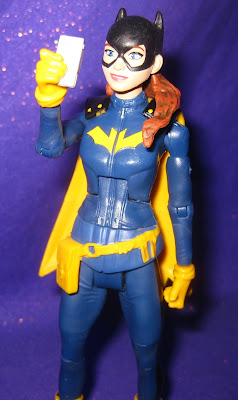 The cell phone is unpainted, but has enough sculpted detail to look like a cell phone and not a silver brick. The most surprising feature is that it fits securely into the figure’s hands. 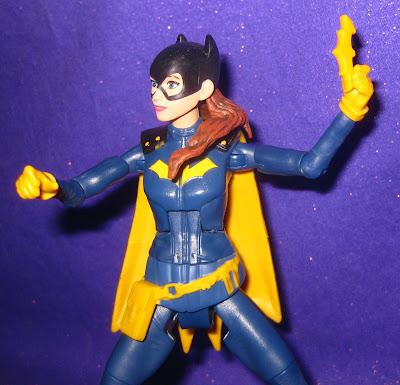 Batgirl’s Batarang (Batgirlarang?) looks like a big, golden cookie. It’s too thick by far and has no sculpted or painted detail, but it does, at least, fit securely into the figure’s hands.

I realize that expecting accessories to interact well with the figure is a pretty low standard, but it’s one that Mattel has failed to meet in the past. Heck, just having accessories is a huge perk. 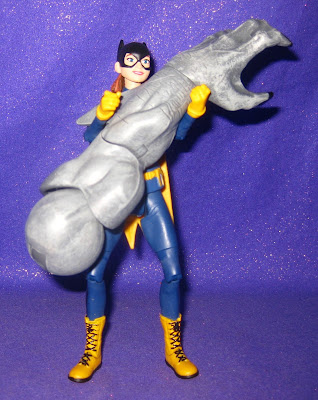 The King Shark arm is huge, which makes me excited for the rest of the figure.

Unfortunately, four of the six figures in this wave hold no interest for me, so I’m going to have to keep an eye out and hope they get the Captain Boomerang treatment (the Multiverse Suicide Squad Boomerang figure is currently $3.88 on Amazon). I can already tell you that Hawkman and Joker are going to get down to at least ten. Just give it time. 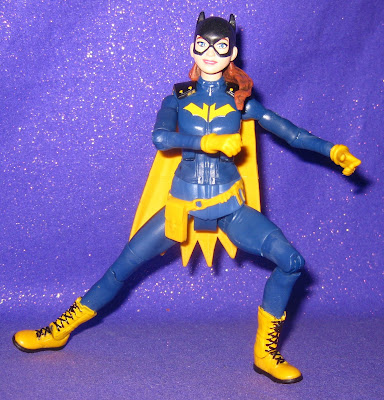 Batgirl has the standard DCUC articulation.

The head swivels and has a bit of range in other directions – more than her dad has.
The arms are mostly basic with 90 degree pivots, but there are swivels at the biceps and the elbows. I’d almost prefer it if they’d left the biceps swivels out because they are ugly.

You’d think the bottom of the jacket would restrict the hips a bit, but they move nicely. Even the low-hanging pouch doesn’t prove to be much of a hindrance.

This isn’t by any means the most usefully articulated figure ever, but for a mass market retail release it can pose as much as I want it to. If you need double jointed joints, you’re going to have to pony up for the DC Collectibles version. For less than a third the price, this one does just fine. 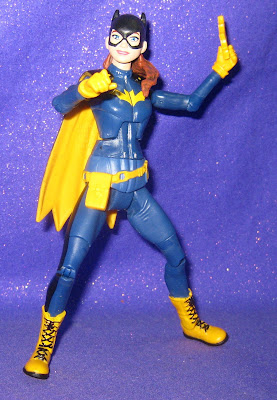 With a satisfying amount of joints and a couple of accessories to play with, this figure does a fine job of being fun. 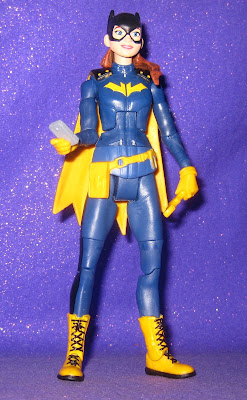 I never would have imagined I’d be saying this, but I find myself more satisfied with this Batgirl than with the Icons version. It’s not a better figure by any means, but in the context of what it is within the line it’s a part of, it’s very good. If you like this Batgirl, I recommend it.

Buy one now from Amazon and help Needless Things pay the bills!:

If you enjoy Batman, toys, or Needless Things you might enjoy SupportPhantom.com. Huge thanks to our excellent Patrons Zack, Gary, Lucas, and Beau!
Posted by Phantom Troublemaker at 11:00:00 AM