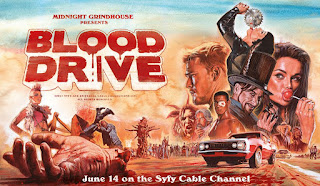 The SyFy channel has long been a joke. Well, it has been for me anyway. Terrible horrible terrible movies, and original shows that don't quite get the job done have left SyFy adrift in a world of not knowing what it wants to be. Sometimes it's like they're trying to pick up the geeks G4 left behind (man I used to love that channel), and then they run off to make more bullshit for the dudebros. I've made no secret about how I feel about the direction the movies have taken, but I have given some of the shows a chance. Z Nation was very literally the worst, 12 Monkeys got old pretty quickly, and I'm reading the first book The Expanse is based on and it's so fucking slow that I can't imagine it being a worthwhile show. I'm only finishing the book because I paid money for it, otherwise I'd have given up a few hundred pages ago. Face Off is done, Cosplay Melee is their second cosplay show that hasn't worked, and I keep hearing that Killjoys is the new Firefly so that must mean it isn't even close.

Despite all of this I had two people tell me that I'd like the SyFy channel's newest show Blood Drive. And guess what? I do. I'm surprised too, and while it won't be winning any awards it certainly makes up for a lot of their other programming. It doesn't excuse the fact that Sharknado 5 is coming out soon or that they keep giving Roger Corman money, but it does entertain. If you find blood, sex, and camp done in a 70's style entertaining that is. Lucky for me, I do. 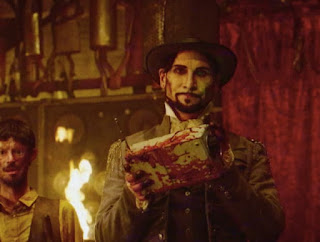 So the story: It's the year 1999, and the world has become a cross between The Road Warrior, Tank Girl, and the little seen or liked Doomsday (am I the only one who found that movie fun? Though I guess nobody but me liked Tank Girl either so I could just be showing off my bad taste here). Fracking has created a huge divide called "the scar" in the middle of the country which led to the discovery of "unidentifiable goo" that will surely play big at some point in the plot. Surely. Gas and water cost outrageous amounts of money. A company called the Heart Corporation controls everything from the water supply to the cops, and crime is rampant. There are only a few honest cops left, and both of them are unlucky enough to stumble into the start of the latest Blood Drive. Teams of drivers race to the finish line in cars that run on human blood for the chance to win glory and fabulous cash prizes. It's like Cannonball Run, but the cars are fueled by blood rather than Burt Reynolds' self satisfied smarm. In this terrible new world blood is cheaper than gas, and the engines of these cars look like some sort of miniature abattoirs with gears and other car stuff that I don't understand all modified to reduce people to their most valuable component. One of the cops gets caught up in the race with no way out - since race partners are conveniently implanted with bombs to keep them from getting too far away from each other without exploding. The other cop gets dragged into the Heart Corporation where he gets indoctrinated by a frightening, but hot in a BDSM sort of way, android. They both seem to be in very bad places, but at least the cop in the race (Arthur) gets laid. Arthur's racing partner Grace is a hot non-android who doesn't care at all about killing innocent people as long as she can stay in the race. She's trying to save her sister from some sort of mental asylum that is also owned by Heart, but I didn't catch exactly what they're doing to her or why it's bad. 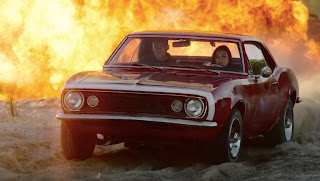 So Grace and Arthur are stuck together trying to win a really gross race while battling other drivers, cannibals, and going up against Heart employee/show-runner Julian Slink and the evil company backing him. It's only two episodes in, and already it's complicated. I assume things will become more clear as it goes on since SyFy ordered a full season. I will give them that at least. They don't do a pilot, and then wait to order more episodes. They just go balls deep with whatever they do. And they are so balls deep into this show that...I almost said some stuff too gross even for our readers. That's the effect this show has on me. Not sure if that's entirely healthy since I already say some pretty messed up shit, but it sure is fun. The best part about this show by far is the style. SyFy said "fuck it. If American Horror story can have ass rape in the first episode of a season then we can do whatever we want". And they definitely do. There's nudity, attempted rape, super graphic violence, sex, and terrible language all in the first episode. And it's all done in the old 70's grindhouse way that's so good and bad at the same time. There are even fake commercials, and ads for the next episodes are VHS tapes. There's also a complaint hotline if the show offends you somehow. You should call it even if you're not offended. The number is 325-400-3423, and it's worth your time. 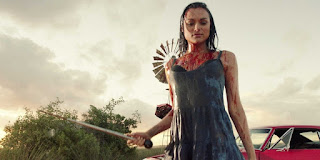 If you like old school blood, guts, and mayhem then you'll enjoy Blood Drive. It'll never be ground-breaking, but something old can become something new when approached in the right way. And the SyFy channel, for all its faults, is allowing this to be presented in the right way. It's only a few episodes in so do yourself a favor, and get in on this early. If two very different people are telling me I'm going to like something like this then it was worth a shot. If Phantom's or my word are worth anything then you should take a chance too. It may be too over the top for you, and that's okay. I get that. But you also might find something old, something new, many things borrowed, and a hell of a lot of things red - with blood.