Devlin's Domain - I Will Walk Like A Crazy Horse 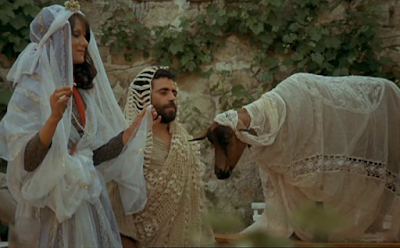 Most people in this country today have never had to live in an environment where they weren't dependent on some sort of technology. Nearly everything that is not yet facilitated by machinery is going to be facilitated in some way. Even something as simple as typing this review can be done by speaking into a microphone and a computer will manifest my speech in text form. As convenient as things are now, one must wonder if humanity may be losing some sort of connection to it's primordial beginnings. As we have evolved suspiciously beyond every other life form on this planet, we've left them far behind and mutated the Earth into something barely recognizable. Interesting things this week in Devlin's Domain.

Many may be familiar with the surrealistic films of Alejandro Jodorowsky such as El Topo, Holy Mountain, and Santa Sangre. Not as many people know that he once founded a theatre group called the Panic Movement with writer/director Fernando Arrabal. When the group dissolved the two set off to direct their own string of films. Arrabal's films, for some reason, didn't get the international attention that Jodorowsky's received. There is a similarity between their styles, but Jodorowsky's films seemed to be more elaborate and have higher budgets.

Fernando lived in what some may call an "irresponsible era of filmmaking" where he had more liberties when it came to his filmmaking practices. His first film, Viva La Muerte (Long Live Death), had a shocking scene of a live cow having it's throat cut and testicles removed on screen as a woman bathed in the blood. Perhaps it was the graphic nature of his films that kept him from being as successful. Although the artistic mastery cannot be denied, his films raise ethical and moral questions. The things I have seen in his films, for better or worse, could never be done today.

I enjoyed Viva La Muerte quite a bit. It was an anti-establishment film with themes of war and religion that pounded its message in with blunt force. The second film was a huge improvement though in my opinion. Religious themes were pushed to the forefront along with the struggle between nature and civilization.  The film is full of scenes that the average person would find disgusting, disturbing, and offensive. That's all of the things I like and this is...


The film opens with a newscast in sign language that breaks down the scientific progress of the civilized world and highlights the culture of celebrity worship. The newscast wraps with a story about a man named Aden who is wanted for killing his own mother. We then follow Aden, who is played by George Shannon, as he heads out to the desert with a trunk full of his mother's jewels. While Aden is in hiding, Inspector Gay is on the case to find him and bring him in. 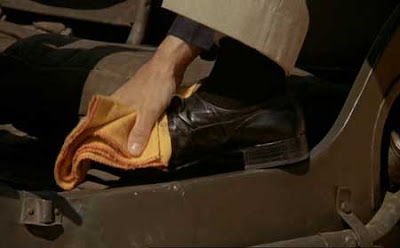 Aden wanders the desert, thirsty and hungry. He finally comes across a small bearded man named Marvel. Marvel offers him food that Aden finds delicious. He makes the mistake of asking what it is and it turns out to be rose petals wrapped around a mixture of flour and goat shit. Marvel is a Christ-like figure who has been isolated from civilization for thousands of years and happily survives on sand, feces, vegetables, and goat's milk. He also has the power to communicate and manipulate animals, turn night into day, and a few other odd abilities. 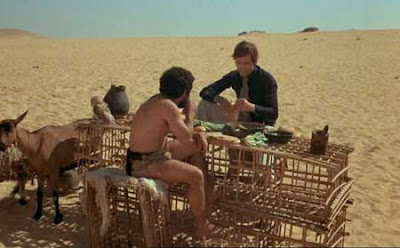 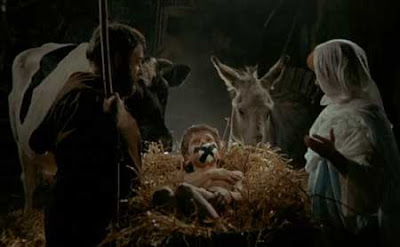 Marvel gets curious about where Aden comes from and Aden is excited to tell him about television and all other sorts of modern technology. They get to be really friendly with each other out in the desert. Like so friendly they take a graphic bowel movement while leaning back to back. Aden eventually convinces Marvel to go to the big city with him. Of course the first scene in the city is Marvel having a sensory overload while at a political rally. The stranger in a strange land at least got to bring a goat with him.  Aden gets them a luxury apartment to stay in, but Marvel complains that there is no soil and cant be lived in. The solution is, of course, to dump soil all over the apartment. 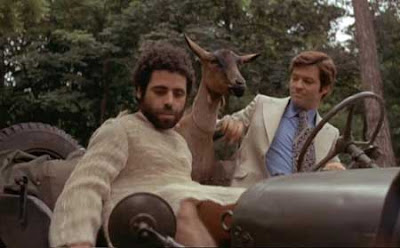 Aden tries whatever it takes to make Marvel happy in the modern world. He even tries to get his girlfriend to have sex with Marvel as a gift. When she refuses he ends up killing her out of frustration. Marvel simply cannot adapt to society though. At restaurants he imagines people eating live animals because hes so close to them. The experience is traumatic for him, even though it's normal for everyone else. He eventually ends up joining the circus for some reason. 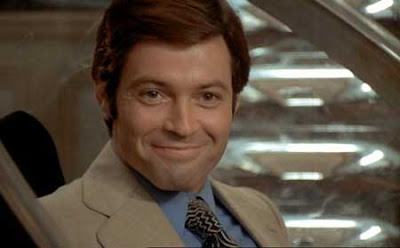 While Marvel is gone Aden keeps having hallucinations and flashbacks to the strange relationship he had with his mother. He goes through some of her garments and starts to put them on. Next thing you know Aden is giving birth to a human skull in a bathtub while wearing his mother's lingerie. Brilliant. While Aden is having his little episode, Marvel is releasing lions at the zoo like a maniac. Then they get back together and head to church where Marvel has a bizarre religious experience. 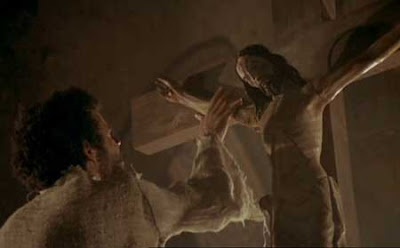 After church they go for an outdoor lunch where a young woman starts to flirt with Marvel. He ends up marrying her on the spot and they take off to the honeymoon when the police catch up to them. With Aden driving and Marvel tossing bride's veil into the face of the motorcycle police, they manage to escape. The girl runs off with Marvel alone and gets on her knees with her skirt up. Instead of having sex with her Marvel sticks a flower up her ass and then into his mouth. Later that night Aden attempts to have sex with the new bride and she resists. But then she finally gives in and the camera pans down as she disrobes. We see her face, her breasts, her slim belly, and finally her shriveled and uncircumcised penis. This movie is just one ma turn after another. 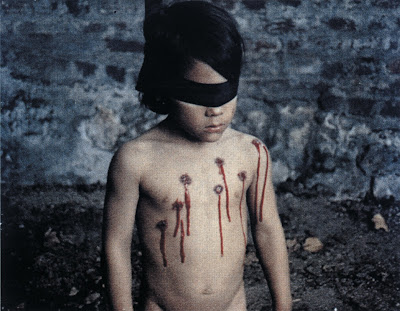 The cops finally catch up to them and unload some bullets into Aden. Marvel tries to revive Aden by pissing in dirt and making a salve out of it. He also sprays goat milk into his mouth straight from the utter. While he's incapacitated, Aden has the revelation that he killed his mother. He gets Marvel to dress like a judge and pass a sentence on him. Marvel finds him guilty and sentences him to death which prompts an epileptic seizure. With Aden close now dead, Marvel stuffs him in a wheelbarrow and takes him back to the desert. 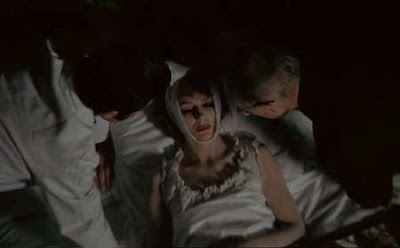 Once back in the desert, Aden's voice speaks to Marvel and asks him to dress like his mother and devour his body. This sets off a pretty graphic cannibal scene and we see Marvel chop up Aden's body parts and pull out his brain and eat it. He wraps the intestines around himself and is making love to the corpse as he eats it. He even eats the bones once the meat is gone. After the last bite Marvel goes into epileptic seizure himself. He rips out his hair and his beard and when he comes back up to his feet....he's Aden. 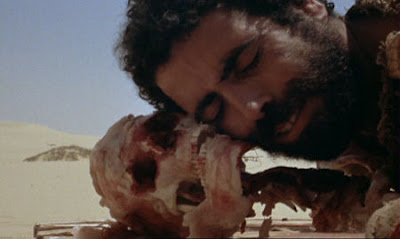 When I first watched this film I couldn't believe what I had just witnessed. It's poetic, cerebral, philosophical, existential, and completely fucked up. There were some scenes of full frontal nudity of little boys that would get you lynched today. They weren't being sexualized, but it's still too much for some people. Especially when there are needles sticking out of a little boy's bloody penis. The story was good and coherent, but the addition of hallucinatory scenes gave it an extra edge. This is definitely one of the strangest films I have ever seen, and I have seen some starnge films. 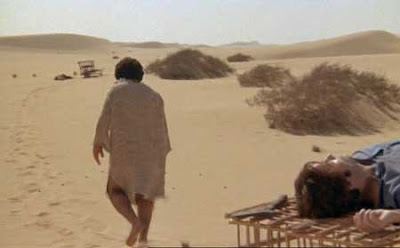 Just looking at cinema and the things you could get away with in 1973 compared to today, it seems like our society is less free now. There's more control over what can be shown and what can be seen. Of course, I wasn't alive in 1973 so all I have to go by is the art that was made from that era. Art can tell you a lot though.

IMDB rates this movie at a surprisingly high 7.1. I honestly really loved this movie and will give it a 9. It's just the craziest damn movie. That ending had some power to it as well. It's an absolutely magnificent work of art. If you want to know about more crazy ass movies like this one make sure you come back to Devlin's Domain.

About Me: I have a couple of different aliases, but for this column I will use my middle name. I am Devlin and I currently reside in Atlanta, GA. 33 years of age and still feeling immortal. Former Rockstar, current Pro Wrestler and hell, I'm still a Rockstar at heart. I got my first taste of obscure cinema when I was about 8 years old. My Dad would take us to the video store every weekend to stock up on classic horror films to watch on his projector. They were mostly harmless, PG-rated horror films like the great Universal monster movies. Then one night he rented a movie for himself to watch after we had gone to bed. I was so intrigued by this film that I wasn't allowed to see. I begged and begged and he eventually caved. That night I was exposed to a film unlike anything I had seen before. Ever since that night I wanted to find more films that gave me that same sensation. I wanted to feel shock and disgust. I found my place in the Horror aisle. The film I watched was Faces of Death. Thanks Dad.www.facebook.com/DevlinValek
Posted by Devlin at 11:00:00 AM