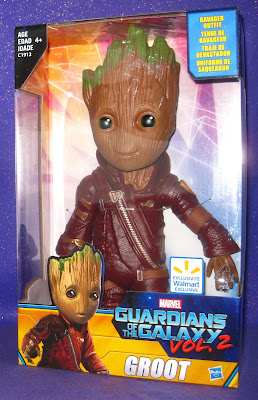 There are way too many Guardians of the Galaxy Vol. 2 toys right now for me to keep track of. The only ones I’m following are the Marvel Legends, which are frustrating me to no end.

I’m happy enough that Hasbro decided to re-release the wave associated with the first movie, except for the fact that Iron Man and Nova are now clogging pegs. The first wave of Vol. 2 Legends is now widely available (in my area, at least) to the point where they’re also taking up a lot of space. This leaves me concerned that retailers aren’t going to order the second wave of figures, which includes Nebula and Mantis, two characters that I have to have.

Of course, Mantis is the build-a-figure, so I’m stuck buying five figures I don’t have to have, but whatever. That’s toy collecting. I’ll just sell stupid gold guy and Worst Death’s Head on eBay or something. Actually, I don’t think Worst Death’s Head even comes with a part. So that’s not so bad.

My point here is that while I know all about what’s up with the Marvel Legends, I haven’t kept the closest eye on the many, many other Guardians Vol. 2 toys. Like this delightful Walmart Exclusive Groot, for instance.

I bought it when I found the first wave of new Guardians figures. Initially I thought this Groot was going to be for me, but then I decided that my son would appreciate it more. There’s still the possibility I’ll buy a second one for myself, but let’s review this thing before I get too carried away by its cuteness. And Grootness. 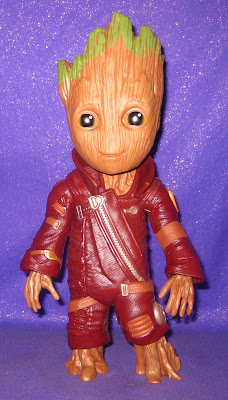 I found this prior to seeing the movie, so all I knew was that it was an adorable new Groot wearing the little Ravagers coveralls that were in all of the trailers. It’s very obviously a cheaper, simpler toy than the stuff aimed at collectors, but that in no way means it isn’t a good toy.

I had to double check my pictures when I started writing this review to make sure this wasn’t from JAKKS Pacific. While smaller than their Big Figs, it definitely seems more up their alley. But nope – it’s Hasbro. 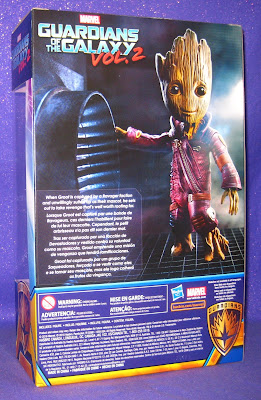 I suppose this is the first tip off that it isn’t from JAKKS, because this window box is much nicer than any of their Big Fig packaging. Nowadays this sort of toy is usually standing in an open top tray or zip-tied onto a backer. This fancy box makes the “Exclusive” seem more like it says “Special and Fancy”.

Note that the graphic on the front features “concerned Groot” and not the “happy Groot” that the toy sculpt presents. SPOILER ALERT: This is more accurate to the movie. 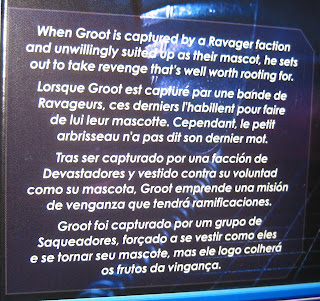 The back features a picture of the toy and a minor spoiler for the movie. I say minor, but it was enough that Phantom, Jr. was annoyed to have read it prior to having seen the movie. It’s only one sentence, but I have to admit that with it Hasbro managed to spoil several fairly major plot points. Also, hardy-har for puns. 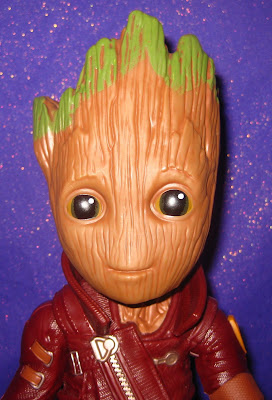 Side Note: NECA released a life-size Groot. It’s fifty bucks while this one is twenty. Choose wisely.

The head is made of a vinyl-like plastic. The sculpt is very good and captures Groot’s features nicely. The wood grain is well done and there’s the hint of eyebrows to give him character. His little smile is sufficiently innocent and bemused. The green paint at the top of his head is thick and just sort of slopped on – there’s no real artistry here. But keep in mind that this is a twenty-dollar action figure. 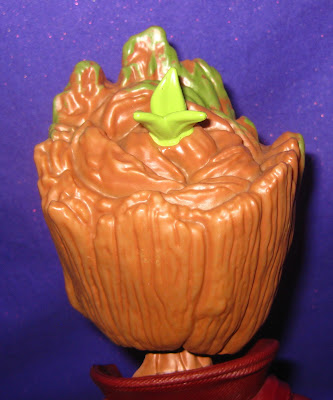 There’s a little bud growing out of the top of Groot’s head that I like and can’t say I noticed in the movie. It’s a neat suggestion of the fact that he’s still growing. The paint on it is green and that’s it. The sculpt on top of Groot’s head sort of looks like a combination of cabbage and brain and it makes me slightly nauseous. I try not to think too hard about Groot’s physiology.

From the neck down the figure is hard plastic of the sort I associate with cheap-o toys with no articulation. That’s okay. This is more a Groot for standing around than for having adventures with. And the plastic may seem cheap, but I bet if this guy fell a few feet onto the floor it wouldn’t hurt him. 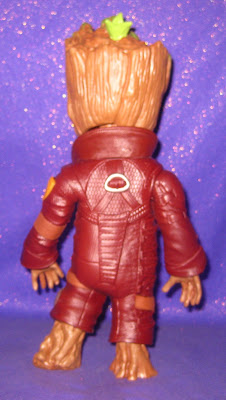 The Ravager suit is sculpted well enough that now that I’ve seen the movie it seems just fine. Maybe there are some details missing here and there, but when you consider the fact that initial promotion showed Groot in this getup in the opening scene I’m not too worried about it. The Ravagers are the dumbest people in the galaxy. I don’t doubt that there are some inconsistencies in their wardrobe.

There’s tons of sculpted detail all over – differing textures, ties, zippers, straps and whatnot. There’s just enough paint on the more significant portions to keep this from feeling like a Dollar Tree toy. The metallic parts are a nice, bright metallic silver and the oranges are a thick, deep orange. As dark as the red is, it would have been easy to screw up the orange and not get it on thick enough. It looks good, though. This is the kind of figure that Hasbro might have chosen to just not paint the back, but the buckles and straps back there are painted, too. They’re all precise, solid paint apps.

Groot’s arms and hands match everything else. I keep referencing the fact that this could have been a cheap-o toy, but it is not. The hands are separate pieces made of the same material as the head. The sculpting is strong and they look great. 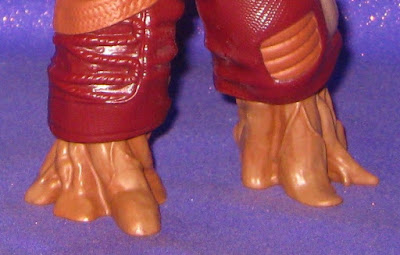 The legs and feet are all the same mold as the body, but that’s okay. The whole figure is sculpted with a certain pose and it looks good.

This is the sort of toy that doesn’t come with any extras, but I would totally buy a deluxe version with alternate heads (or faces). Hasbro could make angry, sad, and worried portraits and repack this exact figure with them and I’d shell out forty bucks for that.
And that Ravager’s eye. I’d need that, too. So he can wake up and be like, “Where’s my eye?” 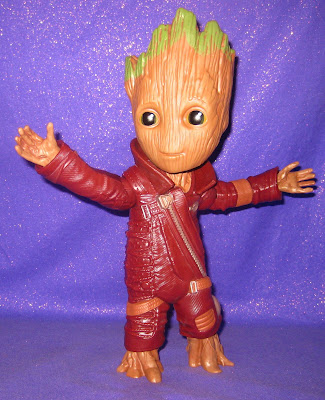 Groot gets all the adorable points, but there’s not much fun to be had here. The head is on a swivel joint. The shoulders are hinged swivels. The hands look like they should swivel, but I couldn’t get them to move and I didn’t want to tear the hands off of my son’s Groot.
The legs are static, but what could you do with short little legs like that, anyway? I’d rather have the figure be stable than have useless joints anyway.

For twenty bucks, this is a great little figure to put on your shelf or for your kid to enjoy having. There’s not much to play with, but sometimes that’s okay. In this case, for $20, it’s okay.

I’d love to see what a talented customizer could do with this Groot. I bet there are some killer paint jobs out there already.

If you enjoy trees, jumpsuits, or Needless Things you might enjoy SupportPhantom.com. Huge thanks to our excellent Patrons Zack, Gary, Lucas, and Beau!
Posted by Phantom Troublemaker at 11:00:00 AM