Movie Review: Guardians of the Galaxy Vol. 2 by Christina 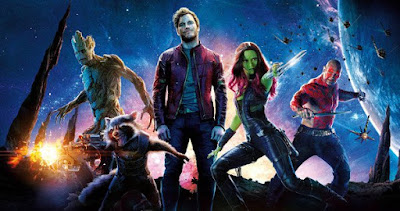 Once in a lifetime that one movie comes along that is thought-provoking.  It tackles the social issues, changes the way the world looks at humanity and even politics, and leaves you questioning everything you ever thought you knew on a deep philosophical level.

Yeah...this is not that movie.  It has flying arrows and explosions and big guns and jet packs and big freaking talking planets.  It's just insane, mind-numbing fun.  You'll walk out of the theatre soaking wet from peeing your pants with laughter and from crying your freaking eyes out.  You want social commentary, go watch a documentary.  Spoilers for the so far non-initiated, so I am Groot.  Er, I  mean, you’ve been warned. 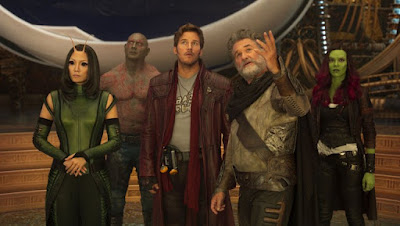 Guardians of The Galaxy: Vol 2 was destined to be awesome, and you knew it as soon as the credits opened on baby Groot plugging in the speakers and dancing like the happy little innocent root that he is.  The best thing about Guardians is that while they are they doing serious work, they never take themselves seriously.  Every Marvel movie has comedic moments, but they are serious and gritty...they are war.  Starlord and Company show a different side of the Marvel universe, and not just from space.  They give you the ability to handle bad situations with a large majority of humor, and that is one of the biggest things that make this series fantastic.  What has made Vol 2 stick out, however, is that while it kept its trademark humor, it dove into a very personal, serious undertone in regard to the subject of family and where you find it. 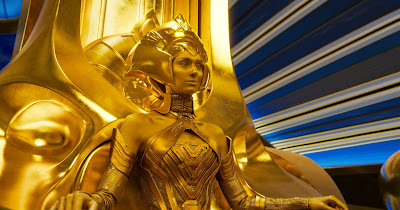 I was curious how the situation with Ego was going to play out in the movie.  In the more popular runs of the Guardian's storylines in the 80's and early to mid-2000's  Starlord's father was definitely not a planet, although he ruled one as the Emperor of Spartax.  A humanoid alien who served as a Prince, he fled to Earth to escape the concept of rule, only to return to it later after meeting and falling for Peter's mother, Peter being the end result.  When they decided to go with this parental storyline I wasn't sure how on earth they could make it stick with anything less than a comedic arc that wouldn't ring true with any serious tone.  But truth be told, I couldn't have been more thrilled to see Russell in the role.  The CGI on him in the opening scene was freaking amazing; he looked even younger than his Jack Burton days and left me appreciating the Episode Seven Tarkin and Leia even more.  Vol 2 is a movie that has a huge focus on its humor so no one could have pulled off a role like this better than him.  He added the right amount of goof, snark, and comedic timing when needed, and yet transitioned into the villain when it came time to just seamlessly.  No one else could have gone from the Pork Chop Express, to L.A. and New York, then to being an entire planet better than Kurt Russell. 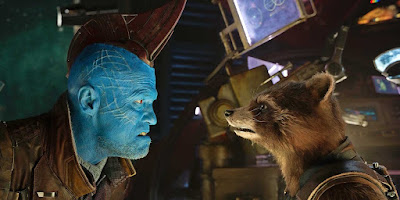 It was this dynamic that Kurt brought about between Ego and Starlord which added such a powerful undercurrent in the movie, and it rippled throughout so many of the characters.  As I said earlier, you could tell that the main word to describe this film is "family."  Starlord wanting to discover that missing part of his genealogy, Gamora and Nebula admitting their wrongs against themselves and each other and who the real enemy was to both of them, Yondu and Rocket finding kindred spirits in each other and the same for Yondu and Starlord, all the Guardians learning to put their own egos aside to accept their roles in each other's lives, etc.  Through the constant laughter and firefights these themes kept the movie threaded into a strong rope that kept you going, up until the gut wrenching moments of the movie between Yondu and Starlord that solidified this blue skinned pirate to be the best character in the entire film.
For a movie so full of bright colors and CGI, galactic battles and funny moments, what really drops the jaw are the ways that characters such as Yondu and Nebula end up endearing themselves to you when before they were just these rogues and villains who were either annoying or made you want to root for the good guys even more.  This movie, however, points out what the media and history ignore; there is always more than one side to every story.  The person you think is a horrid pirate who took you away from your family could have been saving you and loving you like a son.  The villains that stalks you and is  trying to kill you could very well just be a wounded toddler inside that just wanted you to protect them from the person that was torturing you both.  For a funny and goofy movie, Vol 2 totally lays out some very deep and serious crap.

One of the most amazing things about Vol 2 is that like its predecessor, it added characters that were canon, but while they took liberties with them in certain aspects those liberties were so well done that for one of the first times in geek history, there was not an uprising amongst fans.  Mantis is my teenager's favorite character in the movie; says she reminds her way too much of herself and sadly, I have to agree.  In the comics, however, she was raised by a pacifist Kree sect in disguise as Monks who trained her as a martial artist, and was highly social and articulate.  Yondu used a bow for his special arrow instead of his subsonic whistle and was, in actuality, one of the founding members of the Guardians.  Drax was never from an original alien race; he was a human reconstructed into what you see now after his family were killed.  Did you see a single fan revolt over these changes?  No?  Neither did I.  That's unheard of in the geek world and the MCU because, well, geeks revolt.  We revolt often and well.  The Guardians movies are just that well done and the characters that likeable. 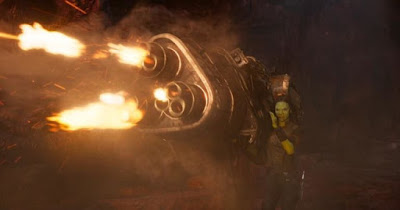 If a movie can balance action, comedy, and family drama in a two-plus hour block and do it that well, then it isn't one that you should miss.  You're laughing non-stop from the very beginning, and crying by the end credits.  It's just bizarre the rollercoaster that this movie sends you on emotionally.  Besides, the movie is worth it for every scene involving baby Groot.  I mean come on…he is just so freaking cute…


Christina Sizemore is trained in only four things:  writing, fighting, paranormal investigating, and being a mom.  At this point in her life she truly feels that she is not qualified to attempt to learn any new field.  A twenty year martial artist, mother of three, and writer who is working on the publication of her first book titled “Finding Your Way: A Guide To Your Path In The Martial Arts,” she spends her days working out, writing, making fanvids, going to DragonCon, and playing board games/video games/out in the yard with her kids and husband who are just as geeky as she is.  She is convinced that one day her skills will be of assistance in the Zombie Apocalypse and that while she is of no use in the kitchen, she can Buffy that zombie for ya or teach you the best way to get the blood stains out of your clothes (Psst…the secret is mixing Crown Cleaner and Shout.  Just sayin’.)
Posted by C.S at 3:00:00 PM