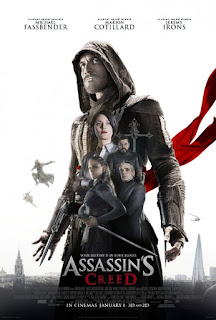 Why am I just now watching (and bothering to review) a movie that came out more than four months ago? The obvious answer is that I only just watched it last weekend. It came out at a bad time. Right before Christmas I have a lot going on so time is an issue, and I only have so much money left after buying everything in the world for everyone else. I had to pick my holiday blockbuster, and do not regret choosing Rogue One. Twice. I regret that decision even less after finally seeing this movie. Assassin's Creed is a strong video game franchise that mixes parkour with murder (killkour?). Stealthing, running, and assassinating make up the majority of your time in the games which all take place in exotic historical locations (except for the one set during the revolutionary war). And guess what? You play as an assassin. Not just any assassin though - you're a good guy murderer who's killing for freedom against the evil Templars who want to control the world. That's supposed to make sense somehow. Then they throw in some shit about how you're a person in the real world reliving the memories of one of your ancestors using a machine called the "animus". It lets you live out those memories while some weirdos at Abstergo Industries record it for some kind of VR thing. But in reality the weirdos are just a scientific front for modern day Templars who are trying to find something the Assassin's Guild hid from them hundreds of years ago that would allow them to monitor (or control or something) everyone in the world. They created a massively expensive and needlessly complicated machine to get the memories of distant relations to those old assassins so they could try and find out where it had been tucked away. Look, the gameplay and history/murdering parts are so fun it doesn't have to make sense. It's like if Prince of Persia (the game, not the movie) had added a second much more idiotic plot to all of the jumping around on shit. 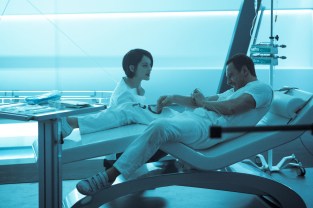 Never in a million years did I think that this franchise would be made into a movie. When I heard that it was indeed becoming a movie I thought it might be okay in kind of a grand adventure high-action popcorn flick sort of way. But then I saw a preview, and realized they were going with the whole stupid modern day sub-plot thing. I was interested, but not "I've got to go spend $12 to see that right now!" interested. Movies based on video games are historically iffy. For every Resident Evil or Silent Hill you get 3 or 4 movies like Mortal Kombat, DOOM, Resident Evil Apocalypse, or Silent Hill 2. I'm not a betting man, but even I know those aren't good odds. Still, the cast made it seem worthwhile. You would assume that Michael Fassbender, Marion Cotillard, Jeremy Irons, Brendan Gleeson, and Omar from The Wire could make even a bad movie at least watchable. I assumed that too. I was wrong. 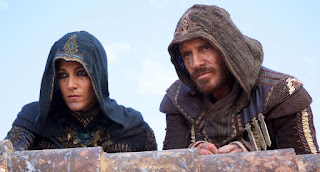 This is a deeply troubling and confusing movie even for someone who's played several of the games. It takes itself way too seriously for what it is, and I don't think anyone involved even knew what it was trying to be. We follow the story of pimp killer Callum Lynch as he's about to be executed in Texas. Because only in Texas would they give someone the death penalty for killing a pimp. He's troubled because as a child his father murdered his mother, and he walked in on the aftermath. His father told him to run away, and he's been running ever since. Or so I suppose. We don't really get a much of a fill in from that to his death day in Texas. Instead of waking up dead he wakes up at Abstergo with Marion Cotillard giving all of us some exposition. She explains Abstergo and the "animus" much worse than I did in my intro, and for a beautiful woman they sure go out of their way to make her look frumpy and unappealing. Soon enough Callum is hooked into a giant machine that sends him back in time to the bucolic splendor of the Spanish Inquisition. And if you just add colored contacts lenses and some bronzer suddenly Michael Fassbender is Spanish. In the games the "animus" has an auto-translation thing like the TARDIS, but someone decided it would be better for the actors to speak Spanish with subtitles during the history scenes. Someone then decided that it wasn't working like they wanted, and rather than scrap the idea they just limited the speaking during those scenes. They don't really dwell too much on Callum's ancestor, but since he had a love interest and all sorts of other hinted at motives I can't understand why. Then there are all of these other people hanging around Abstergo with little purpose too. There are a ton of former experiment subjects just wandering around gaining assassin skills from their time in the machine. Did I fail to mention that they eventually start to retain the powers of their ancestors? I must have forgotten it because it doesn't make any sense for them to do so. If they aren't any use anymore then why keep them around? Oh yes, to advance the plot. Except that they don't. Brendan Gleeson and Omar from The Wire barely get 20 minutes of screen time combined. 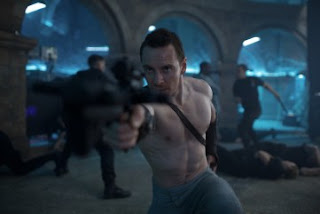 This is the least amount of acting that I have ever seen Michael Fassbender do. He emoted more from behind a papier mache head in Frank. Pinocchio delivered a less wooden performance. It's like he only did this to remind everyone that he still had some abs leftover from his 300 days. It's so serious without telling us why everything should be so serious. It's drab, gray, and lifeless when it's based on a pretty colorful world. There is no reason to care about any of the characters or what they're doing so we don't really even know who to root for. Is Fassbender a good guy? I saw the whole thing and I still don't know. Rather than give the "plot" some kind of closure we get an opening for a sequel. Movies can leave openings for sequels without leaving every single question unanswered. That's just lazy writing. And it's presumptuous as well. A filmmaker (or studio more likely) has arbitrarily decided that they need a sequel without even seeing how well it's going to be received. On IMDB it has a rating of 6 out of 10, a metacritic score of 36 out of 100, and Rotten Tomatoes gives it 17%. I don't go by scores when I'm deciding whether or not to watch a movie, but someone should check those things before deciding to make a sequel (which I hear they're doing). At the very least I'd watch the final cut of the movie I made before deciding that I had just created the next big film franchise (because they didn't). If they had just made the movie be about an ancient order of assassins fighting Templars, put the cool looking Spanish Inquisition stuff in English, and left out all the stupid Abstergo shit this could have been a decent movie. 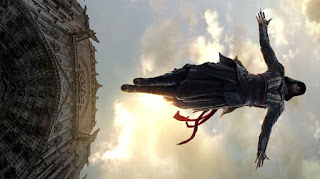 You can tell that a lot of money went into this movie. It just wasn't put in the right places. Handcrafting a few hundred beautifully period costumes (that were woefully underused) and paying the cast left little money for good effects, backgrounds, or script rewrites. It must have also been expensive to have someone go in and remove most of the color from the film in post. Does blood show up better when everything else is colored in shades of blue and grey? That's really the only reason I can think of for doing it. If you are a fan of the games you will get a lovely "leap of faith" dive from the top of a poorly rendered ancient building, and the parkour of yesteryear actually is fun. That's kind of all that was fun about it though. I'm glad I waited for Redbox. At $1.50 it at least gave me something to write about while I try to keep Mr. Tibbs awake long enough to get through the new run of MST3K. But since I only have two weeks until my next post I may have to hold his eyes open A Clockwork Orange style (or go it alone and face his wrath later). I'm happy I have another movie with Michael Fassbender coming soon by way of Alien:Covenant to help wash the taste of this mess out of my mouth. Right now I can only taste body oil and disappointment.