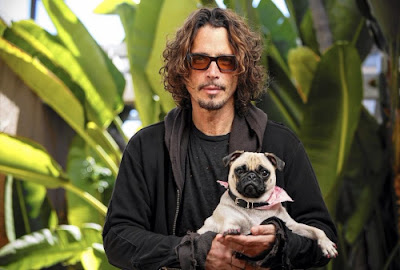 I first heard his voice on MTV whenever the video for the Soundgarden single “Outshined” premiered. It was sometime after December of 1991 and I can’t remember if it was on Headbanger’s Ball or 120 Minutes. Probably the former because I tended to find about sixty percent of the videos on the latter absolutely insufferable.

“Outshined” made me a fan mostly because, despite not being the high-speed metal I enjoyed at the time, it was just heavy as fuck. But Cornell’s voice also got me. His was one of the first that felt like it was cutting to my soul. I loved Joey Belladonna, Ozzy Osbourne, and Mike Patton at that point, but as good as those guys are everything was pretty much just them performing (though Patton would later develop some powerfully affecting skills). I felt Cornell’s raw but expert vocals. It felt to me like he was trying to express just as much as he was trying to perform.

That might even be a critical element of the difference between the Seattle sound that became known as “Grunge” and other rock and metal music of the day – the feeling. But that’s a post for another day.

“Outshined” made me a Soundgarden fan. I can’t claim that they were a favorite, and I grew disenchanted with them as they “lost their edge” over the years, though I now totally understand their musical changes. I wasn’t big on Audioslave and Cornell’s solo work wasn’t the kind of stuff I was into, though I always respected his amazing voice – I think it’s the greatest of his era, possibly of my generation.

You might be wondering why I’m taking the time to write something about the guy if I’m not the biggest fan.

It’s because I’ve seen some utterly appalling things said about him and the way that he took his life and I want to offer my perspective and perhaps soften some unreasonably harsh criticism.

I cannot stop thinking about Cornell’s episode of Marc Maron’s WTF podcast. Chris seemed like a guy that had his shit together and had a handle on rock and roll stardom. He spoke openly and frankly about alcoholism and rehab and mistakes he had made. I learned why Soundgarden had changed their sound after Superunkown (listen to the episode – it’s worth it). Cornell offered an amazing perspective on his life and career and just seemed so self-possessed. This was a guy that had been through the wringer of the music business and come out the other side changed but grown.

After listening to that conversation, I never would have imagined that he was a man that was capable of taking his own life.

But nearly six months to the day after that interview aired, he hanged himself with an exercise band in the bathroom of his hotel room immediately following a Soundgarden show.

Cornell had taken an unusually large dose of the prescription drug Ativan, which is used to treat anxiety and other related disorders. It seems he suffered from anxiety and Depression. When I see things like, “He was a weak coward to do this to his family and friends”, I see a lack of understanding of mental disorders and the epidemic of pharmaceutical abuse that is plaguing this country.

The prescription drug issue is one that concerns me greatly, but isn’t as relevant to this post because I don’t know the details of Cornell’s Ativan situation. I just know that any time a tragedy is accompanied by prescription drug use – and it is becoming more and more common – I am suspicious and angry.

I am more concerned with Cornell’s mental health and the shocking callousness that some are expressing.

To be fair, I used to adopt the same attitude about suicides. I was young and dumb and had no real understanding of the insidious nature of anxiety and Depression. But as we move through life and gain experience and widen our perspectives, we learn and grow. And while I have never suffered from clinical depression, I certainly know how my brain can hurt me sometimes.

Thanks to my day job, I experience near constant feelings of loneliness. I work long, odd hours that keep me separated from my friends and family and interfere with normal activities. Nobody I know is on the schedule I am, so in addition to being physically detached, I don’t have anyone to relate to about this situation. Without getting too deep into the specifics, the workplace doesn’t employ many people that I can relate to on a social level, so there’s not much relief there, either.

This schedule perpetuates feelings of hopelessness. I’ll never see enough of my family. I’ll never be able to pursue extracurricular activities with any regularity because I can’t commit to other peoples’ schedules. When I’m on nights I don’t see anyone and when I’m on days I don’t get enough sleep. There are times where I can barely motivate myself to get out of bed because the job is always there reinforcing the pointlessness of it all.

Sometimes I can accept this status quo and recognize that most of my life is pretty darn good. Soemtimes I feel like I’m drowning. I never have suicidal thoughts because there’s enough good in my life – the times I do get to spend with family and friends – to justify the bad and also because I generally think I’m pretty great. But also because my brain works the way it is “supposed” to.

I have these thoughts, but I can always reason my way through them. I don’t have the disorder that creates darkness for its own sake. My brain doesn’t betray me and tell me things are wrong when they aren’t. My brain doesn’t tell me I’m alone and imperfect and that I will never be happy when there is no realistic evidence to support these thoughts and feelings.

It seems that Chris Cornell did have those kinds of disorders. So there’s no “he decided to abandon his family” or “he was too weak to keep going”. His brain was betraying him. He was incapable of even coming to the conclusions that his death was a tragedy or that there was hope in the future because his brain wasn’t working properly. Expecting a person with mental disorders like anxiety and Depression to recognize reality and make lucid, logical decisions is like cutting off a person’s arms and expecting them to play baseball. The parts of their brains that they need to understand that they are loved and important and part of something do not work.

And it is entirely possible that the prescription drug he was taking exacerbated this condition rather than preventing it. I cannot speak from personal experience, but I have known enough people who have gone through the mockery that is mental health care to believe that this was a factor. When our country’s medical system has adopted the “take this and see what happens” approach to prescription drugs, you cannot rule out that Ativan had a hand in Cornell’s demise.

Please – don’t take any of that as fact or medical record or whatever. I’m just trying to get across the strong likelihood that Chris Cornell did not just sit down and think, “Fuck this – I’m not living anymore” and make a lucid and rational decision to wrap an exercise band around his neck and strangle himself to death.

But even if he did – and I doubt it – please remember that he was a human being. Sure, he was a badass rock star that made it to the top. But he was a human with thoughts and feelings and problems and regrets and desires. Rock star or not, he was on the road, separated from his friends and family and working a schedule and a job that most people cannot understand and doing it all with a brain that might not have been functioning properly.

Mental health disorders are cruel and insidious and chances are most folks don’t understand them anymore than I do. Anyone that wants to puff up their chest and demonize victims of anxiety and depression needs to take a minute and think about just how frail we can be as humans and how little we truly know about others’ experiences and feelings.

That being said, Chris Cornell will be sorely missed. He left behind decades of beautiful, important work and might have had decades more ahead. I sit here and I hope that if any good can come of his tragic end, it will be a light publicly shined on America’s broken mental health care and prescription drug situations.
Posted by Phantom Troublemaker at 11:00:00 AM