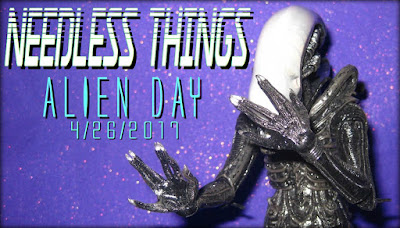 This article was supposed to post on 4-26 - Alien Day. Unfortunately I left my flash drive at work and was unable to post it then. Lucky for you, because now you get an extra Alien Day! It's like a second Christmas, except you don't get any of these toys.

Oh, look – it’s Wednesday and I’m writing another list. Clearly this represents the entropy that is corrupting and will eventually result in the ruin of Needless Things.

But today is 4-26 – ALIENS DAY – and I wanted to play along with all of the other nerd websites that are posting articles themed around this rollercoaster of a franchise. I’ve loved the HR Giger-designed alien creatures since I first saw Aliens in 1987. I wrote about that movie last year, so I decided to write about toys this year. And the best and easiest way to write about toys is to make a list. 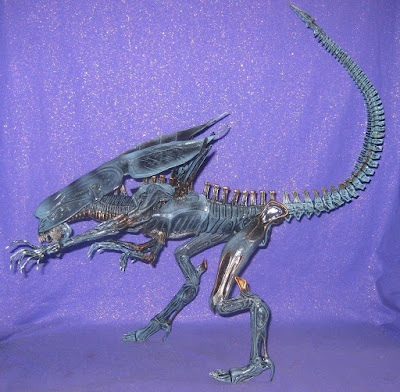 1 - NECA Alien Queen – The biggest and best alien I own. The level of detail on this figure is absolutely staggering. Check out my full review here.

2 - Kenner Gorilla Alien – One of the first and best. I’ve loved the idea of the aliens taking on aspects of their hosts ever since the idea was expanded to various other lifeforms in 1992. The gorilla looks great, has spiffy metallic blue highlights, and squirts “acid”, just like a real gorilla! …wait… 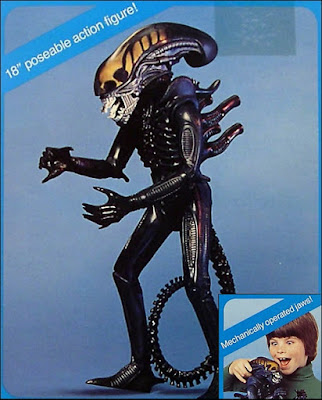 3 – 1979 Kenner Alien – The actual first. For years I thought that this toy was a myth or one of those prototypes that never actually got released. This was another case that the greatest magazine in the history of creation, Toy Fare, broke wide open for me when they featured the toy. 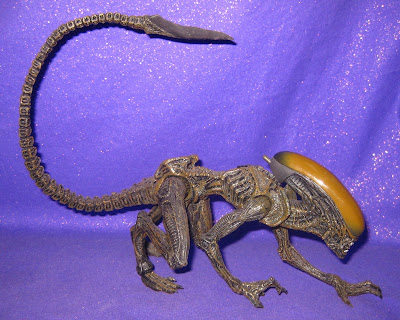 4 – McFarlane Alien 3 Alien – This is a rare instance where I prefer McFarlane’s product to NECA’s. The articulation is more limited, but it looks more like the movie version. Thanks to shared parts, NECA’s can’t ever achieve quite the right four-legged pose. 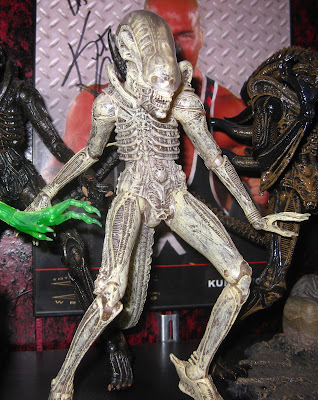 5 – NECA Prototype Alien – This sickly, pale alien is somewhat more disturbing than the black final design that ended up in the movie. But this original design would not have been able to conceal itself in shadows and create the same kind of tension-filled scenes. 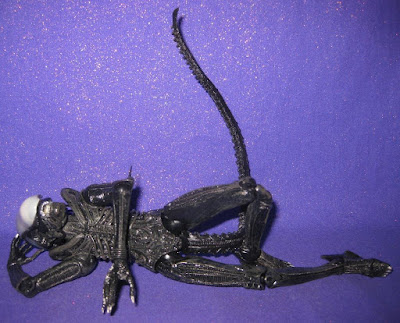 6 – NECA Alien Xenomorph – The classic design executed to near perfection. Any horror fan should have one of these, and NECA has been thoughtful enough to produce several varieties. 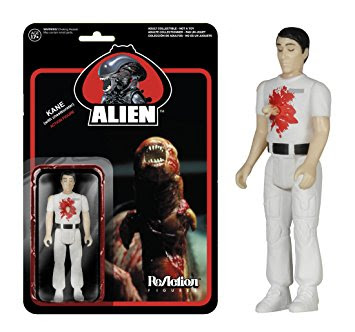 7 – Funko ReAction Chestburster Kane – It takes a lot for a human action figure to make this list. And an adorable Kenner-esque version of John Hurt with an adorable little chestburster popping out of him hit the spot. 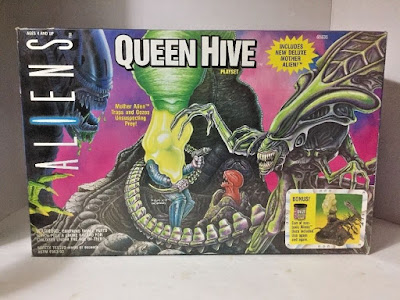 8 – Kenner Queen Hive Playset – The aliens equivalent of the Masters of the Universe Slime Pit. The egg sac from Aliens is one of the grossest things of all time and Kenner made a toy of it. Not only that, but a toy that would drip the disgusting goop all over your Colonial Marines. Plus, it came with a great Queen figure and some eggs! 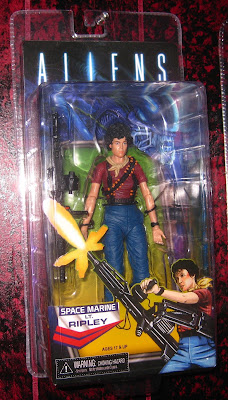 9 – NECA Space Marine Lt. Ripley – NECA has made some incredible updated versions of Kenner’s Aliens Versus Predators figures, but this one is my favorite. Finally we have Sigourney’s likeness with that colorful Lt. Ripley figure design! 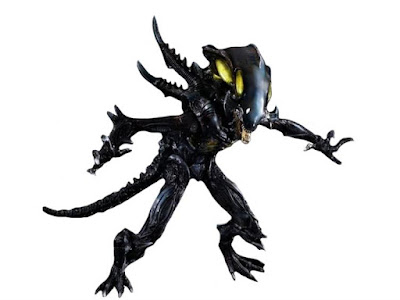 10 – Play Arts Kai Aliens Spitter – This is a just a badass design. I haven’t picked up any imported aliens yet, but if I do, this one is at the top of my list. 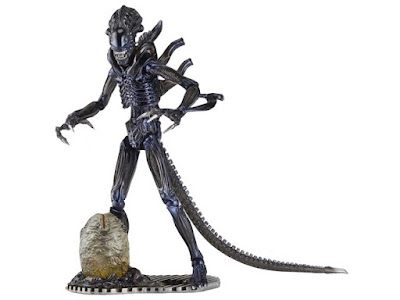 11 – Revoltech Aliens Warrior – Speaking of imports, this Kaiyodo release is awesome in a different way. It’s a solid Warrior Alien, but with the articulation the Revoltech line is known for. Sure, there are some obvious joints, but I’d love to get this thing in hand and see what kinds of poses I can get out of it! 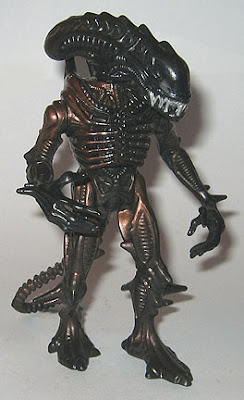 12 - Kenner Scorpion Alien – Until I got ahold of a later entry on this list, this was my default alien. It was the single carded release that was closest to the regular movie design. And it exploded! 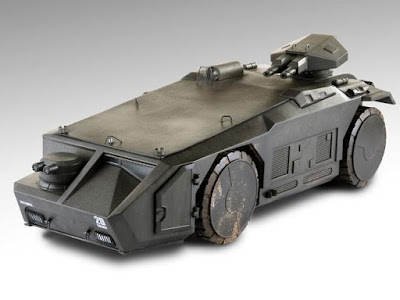 13 – Hiya Toys APC – I WANT ONE OF THESE SO BAD. Besides being the iconic troop carrier from Aliens, this might just be the greatest eighteenth scale vehicle of all time. It opens up to reveal an interior complete with seats, computers, and basically everything they could squeeze in. It has lights, sounds, and rubber tires. Heck, this might be the greatest toy of all time. If I had any experience with Hiya Toys I might have ordered one just to use with my GI Joes. 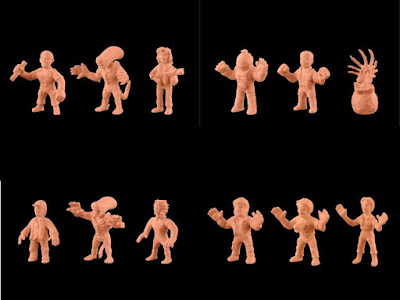 14 – Super 7 Alien M.U.S.C.L.E. – We all know that Mattel’s M.U.S.C.L.E. was one of the signature toy lines of the 80s. Now Super 7 is making little pink rubber versions of pretty much every license they have. It makes sense – when you add Alien, Street Fighter, He-Man, and all of the other licenses together, you basically have a roster just as wacky as the original M.U.S.C.L.E. line! 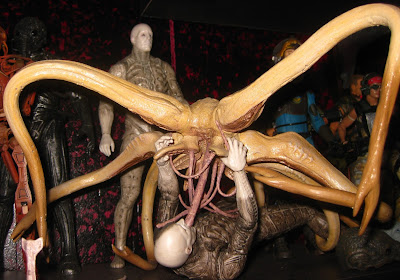 15 – NECA Trilobite – A Toys R Us Exclusive action figure with a huge bendy penis. It came with another action figure sculpted so that you can reenact the mouth-rape from Prometheus. Maybe not as wonderful as some items on this list, but certainly notable in the annals of toy history.

16 – Kenner Warrior Alien – Included in a two-pack with a Predator, this was the actual standard movie alien. And it was a darn good one. I was mad that Kenner didn’t release it on its own, though. I wanted an army. 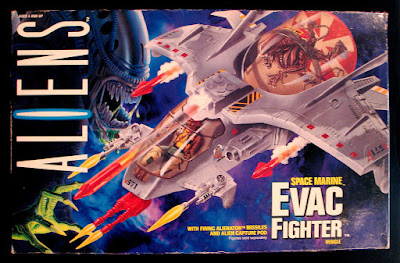 17 – Kenner EVAC Fighter – Obviously this isn’t from the movies, but it is loosely based on the dropship from Aliens. Very loosely. While I always wanted a dropship, this is actually much cooler because it has a prison pod to keep captured aliens in! If NECA tackles this (they won’t after the tepid interest in the Predators Blade Fighter), sign me up. 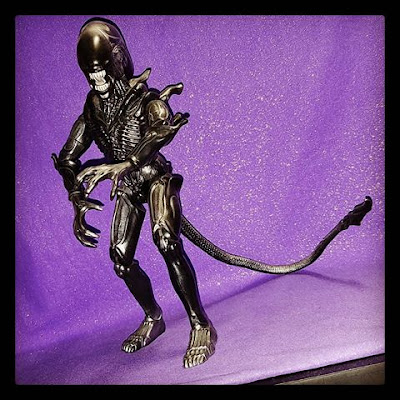 18 – Hasbro Signature Series Warrior Drone – This 12” figure was my main alien action figure for years. It’s kind of simplistic, but that’s a big reason why I love it. Sturdy construction and ample articulation make this a favorite. 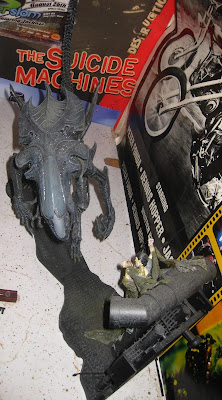 19 – McFarlane Movie Maniacs Alien Queen – NECA’s might have stolen the spotlight, but there’s still a lot to love about this older version. More artistic liberties were taken with the design, resulting in an arguably more interesting toy. And as incredible as the NECA release is, it didn’t include a diorama with a trapped colonist with chest-bursting action. 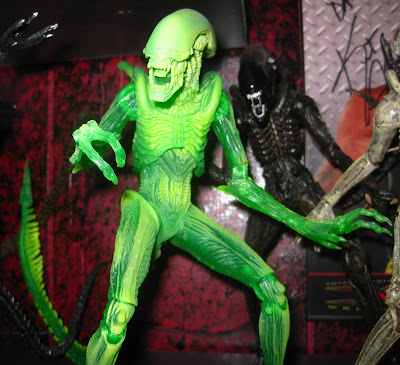 20 – NECA Thermal Vision Warrior Alien – The same mold as NECA’s Alien xenomorph, but it GLOWS IN THE DARK. Perfection. 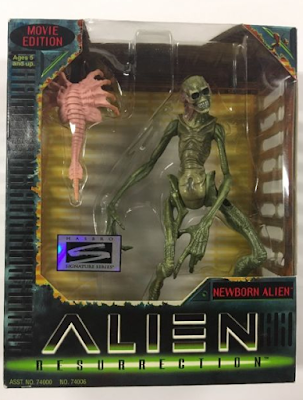 21 – Hasbro Signature Series Newborn Alien – I used to have one of these, but I got rid of it at some point because the five points of articulation always bugged me. I wish I hadn’t. I still think the design is stupid and wish it had never been in Alien Resurrection, but it’s also utterly horrifying. This is one of the most disturbing concepts and monsters I have ever seen and I’m going to need to pick up another one at some point. 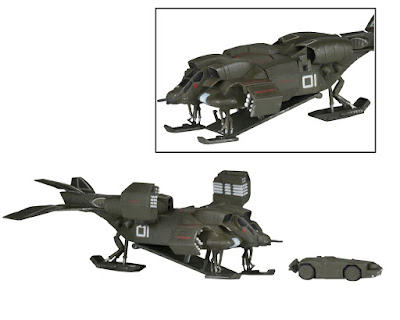 22 - NECA Cinemachines Cheyenne Dropship – The entire range of Cinemachines has been excellent, but I’m not paying twenty-five bucks for a 6” die-cast vehicle. If I won them or some crazy person just gave them to me, I’d be thrilled. But when an actual action figure is sitting right next to them for seven bucks less, I’m buying the figure. 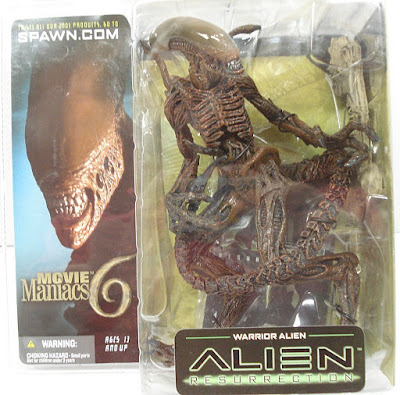 23 – McFarlane Movie Maniacs Alien Resurrection Warrior Alien – I love this design and I love this figure. The articulation sucks and after almost twenty years on the shelf there’s been some warping, but this aquatic xenomorph is still one of my favorites. 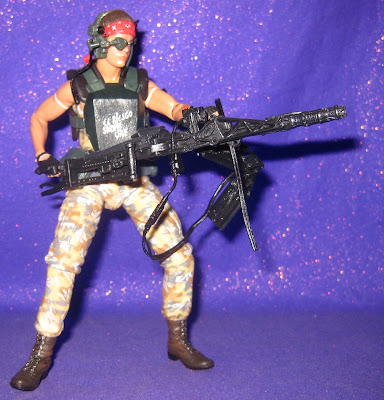 24 – NECA Lt. Vazquez – Vazquez has long been my favorite Colonial Marine. Partially because she’s a chica with the coolest gun in the history of science fiction, and partially… Nope. That’s all I need. 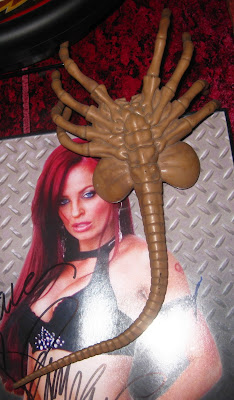 25 – Facehugger Promo Tchotchke – Many moons ago I worked at a video store where we would get all kinds of weird promotional materials. And I just realized that this bendy guy did not come from there. It came from the legendary Electronics Boutique managers meeting that I’ll have to tell you all about sometime. I don’t know what it was promoting. The legs and tail are al bendy and it’s great. 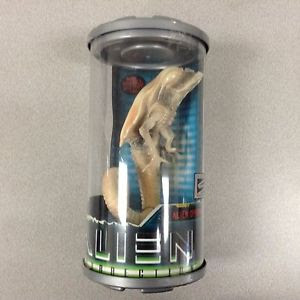 26 – Hasbro Signature Series Embryo – I feel like I would have bought this if I had ever seen it in stores. I love how the packaging sort of looks like one of the containment tubes from Aliens. I need to get my hands on one of these, pronto.

That’s all, folks! Check out the latest episode of the Needless Things Podcast to hear all about Alien in glorious RPX!

If you enjoy aliens, chicas with huge guns, or Needless Things, you might enjoy SupportPhantom.com.