As I seem to be the only person around here who liked Alien: Covenant I feel like I need to retort. The recent Needless Things Podcast on the subject was decidedly against it, and I'm as shocked as you are to find myself on this side of the argument. I'm usually the one tearing things apart rather than building them up, but never fear, I'm sure I'll be back to my normal snarkiness soon enough. Those who can't do criticize, and I'm pretty sure I've proven that I'm not able to do much of anything.
Why did I like a movie that the rest of the Needless Things crew didn't? No, it's not just to be argumentative (although that's a good guess). Maybe it was because that was how I chose to have my friends celebrate my birthday with me. The last time we did this I made everyone go see the Poltergeist remake so by any standards this was a far more successful birthday movie outing. It was not because I was drinking. I only had 2 beers, and it would take a lot more than that to convince me that I liked something that sucked. I liked Prometheus a lot, and this felt like a good next step to me. I felt like the gore was well balanced, the evolution of the Xenomorphs is coming along nicely, and we're progressing the story in a way that doesn't require survivors of this movie making it far into the next movie. Who doesn't want to see a horrifically mutated Danny McBride?

To be clear: I did have problems with Covenant, but they weren't insurmountable. Let's just get the bad out of the way before we try to move on to the good. And if you haven't guessed already there are lots of spoilers here. Though if you've listened to the podcast then you've already been spoiled so much that I doubt I can spoil anything else for you. So at this point I'm assuming you've either seen it or know enough about it to keep up. For those who saw it: raise your hand if everyone in the theater you were in laughed when David told Walter "You just blow. I'll do the fingering"? So yeah, not the best writing ever. Given that the prologue trailers fill in gaps that shouldn't have needed filling in it's probably not the best editing ever either. If you haven't seen them please go watch the two prologue trailers. I'll wait. Do you absolutely have to see them to appreciate the movie? No, but they flesh out characters and events leading up to the Xenomorph shit-storm (or Neomorphs or whatever. I'm sticking with the Xenomorph name for ease). I didn't care about the crew, and I don't really feel like I needed to care. I know they're going to die, and I don't want to get emotionally attached to someone who's going to die within the next hour or so anyway. It's made pretty clear from the start that the only person who matters is the girl with the bad bowl-cut hair. The rest of the crew are clearly monster fodder. Would I have cared more when the rest of the crew died if I'd known more about them? Possibly, but then I'm not really the sentimental type. 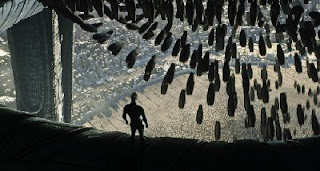 The other prologue trailer shows what happened to David and Shaw when they flew off together in the Engineer ship at the end of Prometheus. Sort of, but not really much better than what we saw in the movie. It doesn't really explain David's motivation for all of the terrible things David does any better then what the movie shows us. Nor does it explain exactly what he did to Shaw, and precisely when he started doing those things. Was she alive or already dead when he started experimenting on her body? What did he discover about the Engineers that caused him to want to kill them all? There are lots of unanswered questions, and since David is still alive (and alone with lots of sleeping humans and a few Xenomorph eggs) I'm sure I'll get some of those answers in the next movie. The biggest question of all may never be answered though. Is it a form of masturbation if an android kisses another version of himself? 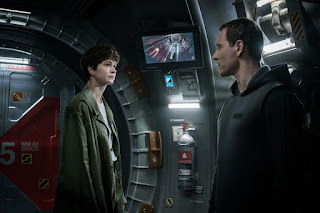 And yet, despite these issues, I enjoyed this movie a lot. Why? Michael Fassbender is amazing. I knew I'd see him perform better here than in Assassin's Creed, but two Fassbenders for the price of one is a great deal. At first I couldn't figure out why he was doing that weird accent for Walter, but once David came into the picture it became pretty clear. You have to tell them apart somehow. Even bowl-cut can't tell them apart once David cuts his hair. The scene at the beginning with David and Weyland seems a little off (almost like a deleted scene from Prometheus), but I think it did two important things. It reminds us of what happened in Prometheus (because a lot of people didn't like it, and didn't want it referenced too much), and it also sets David up for his transformation into a crazy genocidal robot. Again, sort of. I still want to see more about that, but I can wait. I don't think David was crazy in Prometheus. Everything he was doing was under orders from Weyland. He wiped out the crew to try and find Weyland a way to cheat death so in Prometheus he wasn't maliciously killing anyone. By the time we see him in Covenant his boss is dead, and he's got a new prime directive. He's creating instead of destroying. Partially because he's gone robo-crazy, but also because he sees humans as evil and wants to make something better. Again, not sure why he wipes out the Engineer planet that he and Shaw fought so hard to find, but maybe he wasn't satisfied with the creators of his creators also being giant douches. All of this is so extremely well acted by Fassbender that you kind of forget that David is evil. Until the murder starts. 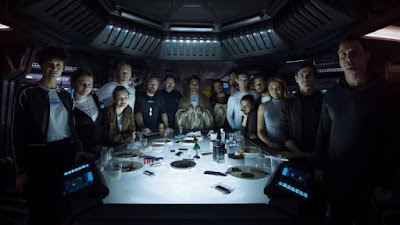 I wouldn't have known that James Franco was in this if bowl-cut hadn't watched that video after he died, but the crew performed just fine for what they needed to be. Who knew that Danny McBride could actually act? I sure didn't before this. I thought Billy Crudup was good as the "man of faith" even if there wasn't a big payoff for his faith. It gave him inner conflict that he portrayed well. What he did even more effectively was be the man not ready to be in charge suddenly put in charge. It's probably his fault they all die anyway. The rest of them were just there to become monsters, get inhabited by monsters, or be eaten by monsters. Speaking of monsters, I also think the progression of the Xenomorphs was well done. They looked more evolved, but weren't quite to the original Alien design yet. I fully expect the next movie to get us across the rest of the gap. And talking about the new Xenomorphs leads to talking about the violence. Anyone who says that Prometheus wasn't gory has clearly forgotten a few parts. Maybe they went too far the other direction after the bad reviews Prometheus received, but I felt like this was well balanced between talking, thinking, and bleeding. Obviously an audience familiar with the original series is going to yell at Billy Crudup's character for getting anywhere close to a face-hugger pod, but these guys have never seen anything like that before so suspend your disbelief for a moment. Is he an idiot for sticking his face too close to any sort of a pod? Yes, but there have been so many idiots in front of so many pods over the course of sci-fi/horror movie history that we can't blame it all on him. And bowl-cut did a good job becoming the new Ripley even though I don't see how she can live through the next movie yet. They're still a long way from the end of their trip, and David has her in the same position that Shaw was in during the prologue trailer. Which now that I'm writing this makes me wonder if he started experimenting on her while she was still asleep. Possibly, but then David really seemed to care about Shaw. If that was the case then when did she have a chance to record the beacon? Yet another (currently) unanswered question, I suppose. He certainly doesn't care about bowl-cut (I know the character's name is Daniels, and that the actress has a name too, but I know her as bowl-cut) so he could do all kinds of shit to her and Danny McBride while they sleep. All of which I hope to see in the next installation of the franchise. 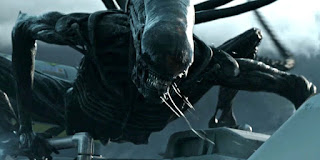 What really is next in this series? I've read several articles about Alien: Awakening taking place between Prometheus and Covenant, but that doesn't seem likely. This is supposed to be a new trilogy, and we need something to take us from Covenant to Alien. There's also the fact that a post-Prometheus movie wouldn't have many characters outside of David and Shaw. Since we've already seen the outcome of that road-trip an entire movie of them wouldn't be very exciting. I think next we'll get David helping the Xenomorphs finish their evolution, and killing lots of innocent people in the process. And since we didn't actually see Walter die he could still be out there waiting to get picked up by another Engineer ship. So my best guess is: Daniels lives (for some reason) waking up on whatever planet they were headed to in the first place. She has to fight David and fully evolved Xenomorphs, Walter shows up with some Engineers, more robot fighting, and Daniels (possibly Walter, but I bet he sacrifices himself to save her) gets away while leaving behind a planet of Xenomorphs for Ripley to come along and find later (which is really earlier chronologically, but you know...). That or everyone becomes part of David's experiments, and dies horribly, but with Walter still showing up somehow for another robot fight. That's the best I've got, but hopefully Ridley Scott will pull out something better than what I just pulled out of my ass.