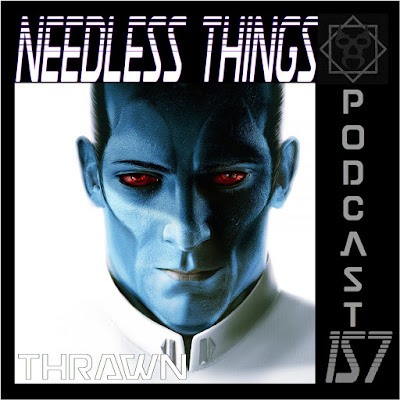 
In 1991 Timothy Zahn released the first official, Lucasfilm approved narrative to expand the Star Wars galaxy beyond the events of Return of the Jedi. He continued the adventures of the characters we all knew and loved, but also introduced a number of new characters that would grow to become vital and beloved fixtures in the new ongoing canon of the Expanded Universe (now known as Legends).

Among those characters was Mith’raw’nuruodo, a member of the previously unknown Chiss species. Against all odds he rose through the ranks of the human-centric Empire to attain the rare rank of Grand Admiral, all in order to guard against a threat from outside the galaxy. Thanks to his tactical genius and driven nature, Thrawn became a hugely popular character to EU fans.

When Disney bought Lucasfilm and stated their intention to eject all previous canon, Thrawn was assumed to be lost to the changing tides. But then, late last year, it was announced that the Chiss Imperial would be returning to canon as part of the Rebels animated show, as well as having his history explained in an all-new, in-canon novel by his creator, Timothy Zahn!

If you haven't purchased your copy of Thrawn yet, you can get it right now!:

Listen in as Phantom, Beth, and Chad discuss the history of one of the Empire’s greatest and most fascinating figures in the newest episode of the Needless Things Podcast!


Be sure to join the Needless Things Podcast Facebook Group and get in on the conversation for this week’s episode! Let us know what you think!
“Procrastibate” by LeSexoflex.com

If you enjoy Batman, toys, or Needless Things, you might enjoy SupportPhantom.com.
Posted by Phantom Troublemaker at 11:00:00 AM