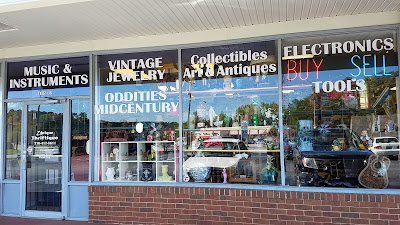 Sometimes when you’re out and about, fortune smiles upon you and you discover a magical corner of the universe where the past and the present have collided in the most delightful way. Last Friday the Troublemakers were roaming the suburban countryside when we came across a place called Unique Thriftique in the somewhat unlikely location of Lilburn, Georgia.

Years ago the Metro Atlanta landscape was fairly littered with stores that boasted a competently curated selection of memorabilia and consigned goods from decades’ worth of pop culture and merchandise. I used to devote entire days to traveling between such stores looking for toys and collectibles, as well as hitting the occasional Goodwill or other thrift store along the way. Sadly, the internet has reduced the profitability of stores like these to the point that they’re a rare thing. I’m pleased to report that Unique Thriftique is looking to keep this special breed of retail alive and well in 2017 and beyond. 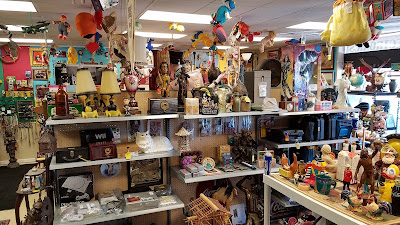 As soon as we walked in the store I was overwhelmed with the sheer awesomeness of the goods on display, but it didn’t take long for me to realize that there was genuine care taken in the displaying of said merchandise. The price tags were handmade and there wasn’t a single item in the store that broke into the territory of scalping or otherwise unreasonable pricing.

The owner, Ben, was a pleasure to talk to and has an enthusiasm for the products he’s selling. He isn’t there just to make a buck, I also got the strong feeling that he’s in business for that crucial, often lacking aspect of modern retail – fellowship. I often lament the loss of local, mom and pop retail. Record stores, movie shops, and book sellers where you could talk to the staff and learn new things. Places where you could share opinions and ideas and develop a sense of community based around your shared interests. Places where you could trust the taste of the owners and employees to guide you to interesting purchases as opposed to just trying to pad the bottom line.

Every inch of Unique Thriftique is covered in awesome. Almost everything is for sale. There were a few taxidermy pieces and an ancient wooden circus monkey that were there purely for ambiance. 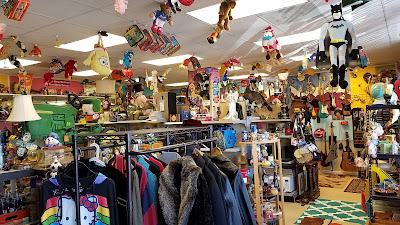 There was so much to look at that I didn’t even notice the lunchboxes hanging from the ceiling until just now. Of course, I was also distracted by that beautiful Art Asylum Ace Frehley. I have the matching Gene, but didn’t pull the trigger on the other three back in the day when I had the chance. I’ve always regretted it and they are way too expensive to pick up now.

Everything in the store is clean and well-maintained. This isn’t some grimy junk shop, it’s a bright, cheerful space. 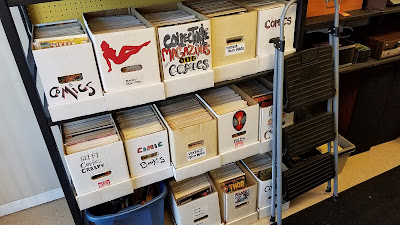 Just inside the front door are boxes stuffed with comic books and vintage magazines. I didn’t peruse these too closely because there was so much other merchandise to examine. I am absolutely delighted by the hand-printed labels on the boxes. 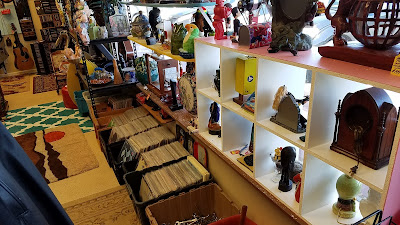 The floor to the right of the door is lined with crates of records. Albums from every era of music are in these, and the prices are fair. Like the comics, I didn’t delve too deeply, but I could have easily spent an hour or more just digging through these treasures. 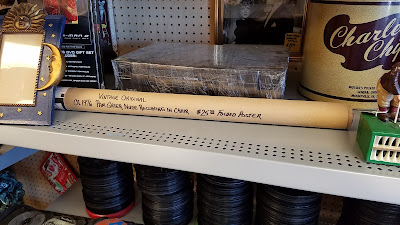 This was one of the first things that caught my eye. I didn’t immediately see the label, but seeing a rolled, tubed poster on a store shelf is a somewhat unusual thing. Even without the “Pam Grier Nude” designation I knew there had to be something noteworthy about this cardboard container. In my pre-family days this would have been an instant buy. As is, I am counting on one of you Phantomaniacs to stroll in one day and buy this remarkable piece of art to hang in your own domicile. Preferably framed. 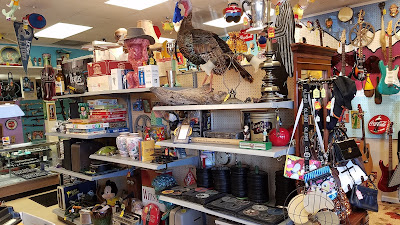 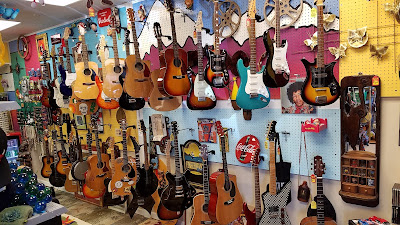 LOOK AT ALL OF THE GUITARS!!!!! I don’t know about you, but I can’t simply walk past a wall of used guitars. Every single one of those instruments has a story attached. Many of them probably represent broken hearts or abandoned dreams. A wall of used guitars is a heavy and emotionally powerful thing. I daresay that nobody gives up a guitar just because they want to. It’s not like an old vacuum cleaner or DVD. A guitar represents so much more emotional investment. 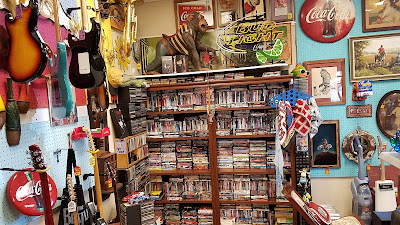 Like any good vintage boutique, the store boasts a selection of what I think of as “gimmie items” – CDs and DVDs that might appeal to anyone off the street and don’t have as narrow a potential customer base as, say, a Santa Stimpy (which the store did, indeed have). This is the stuff that’s easy to keep in circulation and can represent a solid little cornerstone of any pre-owned business. There were video games scattered about the place, too. 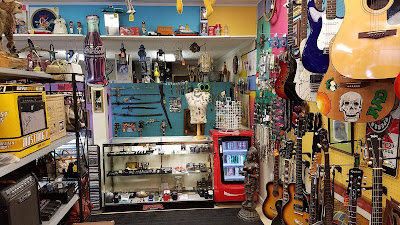 The back of the store featured a series of glass sales counters stuffed with even more magical items. From vintage designer pens to… uh… vintage designer pins, these glass cases are packed with coolness. My favorite here was the original View-Master!: 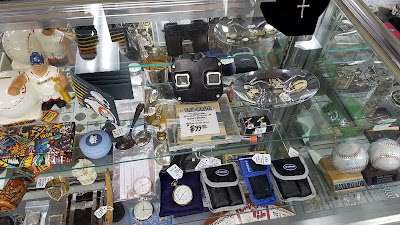 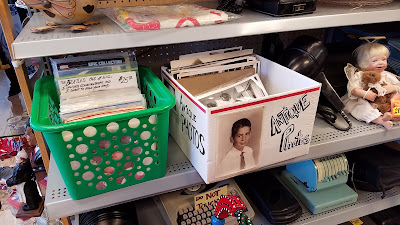 More 45s, a box of old photographs, and a horrifying baby angel! 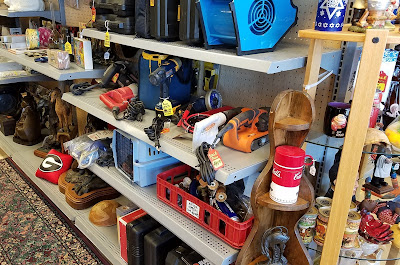 Unique also had a number of electronics and tools spread throughout the store, but not so much that it interfered with the Feng Shui of the less practical collectibles and memorabilia. I didn’t inquire as to the functionality of any of that stuff, as I’m not in the market for a DVD/VCR combo or a 5-disc changer, but I’d be willing to bet it’s all in good working order. Also note the crate of Laserdiscs on the bottom right. Nice! 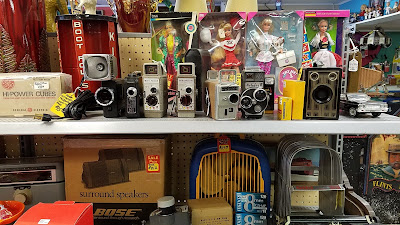 I felt that these cameras warranted their own picture. I don’t know much about Super 8, but they looked neat. 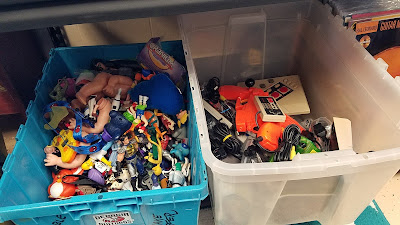 We spent a good hour or so talking to Ben and rifling through the merchandise, knowing we’d be back another day when we had more time. Unique Thriftique was an absolute delight, and it makes me indescribably happy to know that such a place is alive and well, just waiting for me to return on my next payday.

This post represents less than half of the pictures I took while in the store - just a small sampling to pique your interest. Next time you’re anywhere near the Lilburn area, I strongly recommend you stop in and check it out. Tell ‘em Phantom sent you!

In closing, here is my favorite item from our visit that day and the one that I wish I had bought:

Right up front, nestled between dueling roosters, a duck who Can’t Even, and a member of the Royal Canadian Mounted Police was one of the most baffling pieces of art I’ve ever seen – NUDE CANNIBAL MAN! 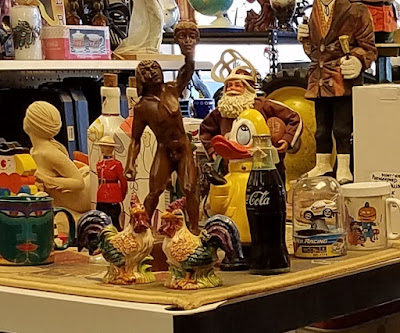 WTF is even going on here? This statue is utterly bizarre. This guy, penis hanging all asunder, lofting this decapitated head unto the heavens. I can’t even imagine the history behind this thing and, quite frankly, I don’t know that I really would want to bring it home because it looks exactly like the kind of haunted artifact that stupid white people would buy in a horror movie, prompting me to yell, “You stupid white people! Why would you even bring that creepy thing into your homes!?!?” after it came to life and cut all of their heads off.

I wanted to ask Ben about it, but I also didn’t want to scar my son for life by drawing his attention to it. It’s one of those deranged items that could make a nine-year-old question everything they know about the world.

If you enjoy comic books, toys, or Needless Things, you might enjoy SupportPhantom.com.