Anime You Need to See 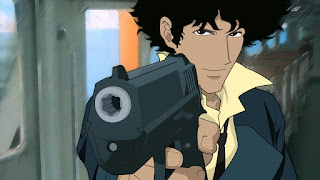 Yeah, I know Ghost in the Shell came out last weekend, but what I'm more excited about is that Netflix is making a live-action version of the super cool anime Death Note. I mean I'll see Ghost in the Shell eventually, but it's not something I'm $12 of excited over. These 2 events did get me thinking about all of the anime I've loved over the years though. So I decided to put a little list of my favorites together to give those non-anime people out there a jumping off point.

Back in the olden days there was stuff like Star Blazers, G-Force, and Robotech. We didn't think of them as anime at the time because they were just cartoons to our youthful minds. Just like the kids growing up in the 90's didn't realize that Pokemon, Digimon, and Yu-Gi-Oh were anime. So those are the things we're not going to talk about today. Sorry to all you guys who love your Dragons Balls, but if it came on after-school TV I'm not discussing it here. I'm talking about adult anime where the themes, language, and content were meant for grown ups. I also decided to steer away from movies because I could spend an entire post just talking about stuff like Akira, Appleseed, and the host of wonderful Miyazaki movies.

I'm going to discuss the serialized anime for adults that got me into the genre as we know it today. There are quite a few that I love, and sadly Netflix doesn't carry many of them anymore. Hulu seems to have taken over many of my favorites, and I'm just not shelling out for 2 streaming services. Some of them I discovered through Adult Swim/Toonami, and if you're lucky you can still catch them broadcast there (or check your on-demand occasionally to see if they're playing again). So here are my top 5 best ever anime series: 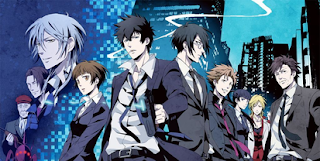 Psycho-Pass
You know I love me a dystopian future. In this one there are sensors everywhere that scan the emotions of every person. That, combined with the files that are kept on people determine if someone is likely to commit a crime. If your psycho-pass gets too high the cops are sent to detain you with a weapon called a Dominator. It changes based on how dangerous or violent the potential criminal might be. Since these Enforcers are potential criminals themselves they have to be watched closely by Inspectors with the authority to kill an Enforcer should their psycho-pass get too high. I guess it's kind of like Minority Report, but cooler because there's a lot less Tom Cruise. 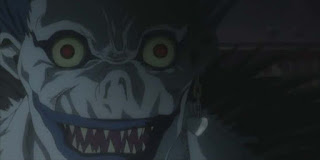 Death Note
A high school kid finds a mysterious notebook that has the power to kill anyone. All he has to do is picture them, and write their name in the book. Once he realizes the power he has he uses the notebook to start taking out criminals. All the power and self-righteousness of being a vigilante, but without the bothersome costumes. He is sort of helped (kind of helped, kind of stalked) by a super creepy Death God named Ryuk, but for some reason the cops don't like someone doing their job for them. Thus begins the hunt for the guy doing bad things to bad people. But since the kid develops an overly aggressive god complex it's probably for the best. I think the Netflix version is only going to be a movie rather than a series, but since Willem Dafoe is voicing Ryuk I'm sure it'll still be creepy. The series is still streaming on Netflix so go check it out now to give a basis for comparison when the movie comes out later this year. 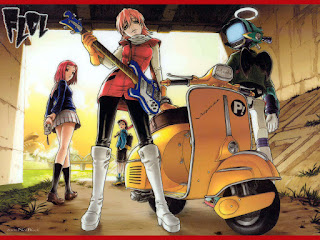 FLCL
Or Fooly Cooly. It goes by both. It is possibly the weirdest thing I've ever seen. A kid named Naota is living a fairly normal life (or as normal as can be expected when he lives near a robot factory that's shaped like a giant clothing iron) until he gets run over by a wacky girl on a yellow Vespa. She also smacks him upside the head with a blue bass guitar which afterward allows huge robot monsters to periodically bust out of his forehead. It's pretty much insane, but it did introduce me the awesome J-pop group The Pillows. Seriously, they're great. As much insanity happens during this show it really all breaks down to a pubescent boy coming of age with some super strange shit going on around him. His older brother's (presumably ex) girlfriend nibbles on his ear, outer space Vespa girl gives him mouth to mouth, and these sorts of thing lead to monsters popping out of his head. So it's hormones, but hormones shown in the craziest way possible. I've read that there are talks of doing another 2 seasons, and I'm not sure how I feel about that. Like British TV shows, one of the things I like about anime series is that they don't go on forever like American shows (which will drag on, and on, and on, and on...). I felt like it wrapped up pretty well, but would still give it at least a chance if they made more. But only if The Pillows do the soundtrack. 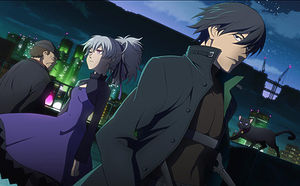 Darker Than Black
The first anime I discovered on Netflix when trying to find Cowboy Bebop. It's another weird future, but this time it's outer space bubbles forming over different parts of the world. Heaven's Gate (no relation to the cult) forms over South America, and Hell's Gate forms over Tokyo. New stars appear, and each one is tied to a Contractor. A Contractor gains special powers, but loses good things like empathy and their conscience. They also have to do weird shit every time they use their powers like hurting themselves, eating a specific food, smoking a cigarette, or some other random OCD kind of thing. They're used as spies and assassins so their existence is a pretty carefully guarded secret. There are also beings called Dolls that are spirit mediums who have no emotions, and can be given the personality of a real person. They usually work with a Contractor as recon since they can send their spirits outside of themselves. The show centers around a powerful young Contractor named Hei who is aided by a Doll named Yin, and another Contractor named Mao who is trapped in the body of a cat. Hei looks and acts like an average dude most of the time, but when he's "working" he takes on the persona of "the black reaper" by donning an eerie mask, and bullet-proof black trench coat. He's pretty bad-ass, and there are some great fight/action scenes. There are also several touching moments as well, and since it's three seasons long you've got plenty of time to get to know and care about the characters. It's all very vague and a little confusing at first, but that is done so purposely. Give it a binge, and it'll get under your skin. Mt. Tibbs and I watched this together, and it became a "just one more episode" thing with us for several nights. I'm used to not being able to put a book down to go to sleep, but that doesn't happen to me often with TV. 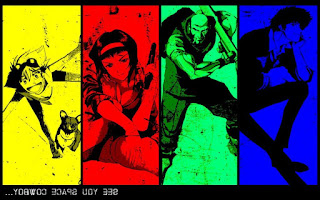 Cowboy Bebop
My favorite anime series of all time! Better than any anime movie or other franchise. Hell, it'd be way up there on my top TV shows of any genre list. It's only 26 episodes long, but damn are they good. In the year 2071 the crew of the Bebop earn their living as cowboys (bounty hunters) in outer space. Jet Black is a former cop with a cybernetic arm who teams up with former hitman Spike Spiegel. They later meet up with con artist Faye Valentine, hacker Edward Wong, and hyper intelligent dog named Ein (don't worry, the dog doesn't talk or anything stupid like that). They're a mismatched rag-tag group that will at some point remind you of the crew of Serenity. Their adventures are a perfect blend of the hilarious and the tragic. Everyone has a past, and throughout the course of the series all of their skeletons are brought out into the open. You'll laugh, you'll identify, and (if you're anything like me) you may even cry just a little bit. All of the episodes are named for songs or genres of music, and this has an even better soundtrack than FLCL. Yoko Kanno delivers a brilliant score, and the opening titles are possibly the best thing ever. If you're a fan of Archer you might even notice a few similarities. Spike is one of the most complex and generally bad-ass characters in any show, and if this show doesn't pull you in then you might be dead inside. Even if you don't like anime; if you like sci-fi outer space kind of stuff, you'll probably like this at least a little. Keep an eye out on Adult Swim/Toonami since it's still in their rotation. There's a movie too, but while good, it doesn't have the same impact as the series. 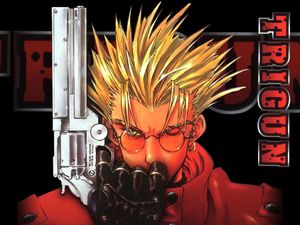 Honorable mentions also go out to Neon Genesis Evangelion, Trigun, Mushi-Shi, and Samuri Champloo. As well as many many others, but there's only so much time. And besides, writing posts 3 weeks in a row is really taking it's toll. How does Phantom do this multiple times a week?