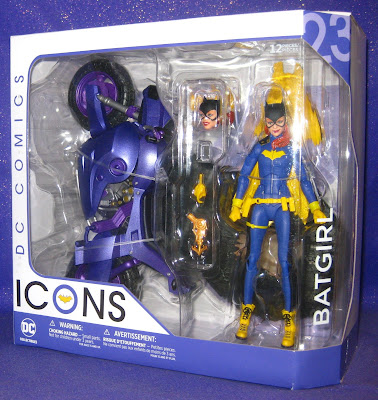 If I didn’t already own hundreds of Mattel’s DC Universe Classics action figures I would absolutely be collecting DC Collectibles’ Icons. Well, if they cost less I would be. But I’ll still pick up favorite characters from time to time like Harley Quinn, Batman, and Deadman. The Deadman is by far the best action figure of that character that I own. Batman would be if not for the One:12 Dark Knight Returns figure. And that Harley is simply outstanding. If you don’t have her, I recommend you find one.


This Batgirl was a must-have because I love this version of her costume and, more importantly, I loved the “Batgirl of Burnside” run of the comic by Brendan Fletcher, Cameron Stewart, and Babs Tarr. This is one of my favorite iterations of Barbara Gordon and I’m still bummed that it had to end. Or, rather, that that creative team’s run had to end. The Batgirl comic continued after Rebirth and I really should give it a try considering how good all of the other titles I’ve read have been.

Tarr, Fletcher, and Stewart went on to create Motor Crush at Image. I didn’t try it because the motorcycle was not my favorite thing about their Batgirl and I’m just not interested in a comic book about bike racing. I’m sure there’s more to it than that, but I’m on a budget, man.

So that I can buy toys like this one. 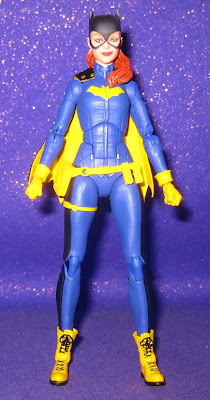 I appreciate that DCC is basing the look of all of the Icons on Ivan Reis designs to keep the line uniform, but at the same time I would have liked to see this figure under the Designers banner with a look that reflected Babs Tarr’s artwork. I would have bought both.

This box is full of bright, wonderful colors and great proportions. I love the size of these figures. I get the appeal of slightly larger scales, but the true one-twelfth scale is my favorite.
The bike looks great, Batgirl looks great, and there’s lots of stuff. I was excited to open this one. 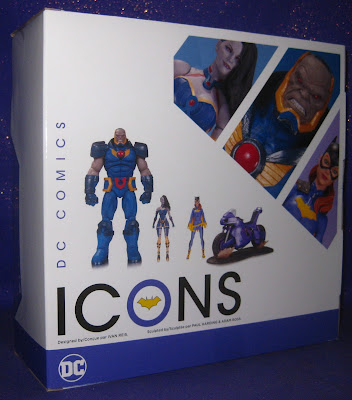 This set comes in a larger version of the standard DC Icons window box. I like the little touches like the purple trim and the Batgirl symbol in the center of the “O”. All of the accessories are nicely visible beside and behind the figure.

The back features the other releases in the “wave” and also creator credits, which I love seeing. 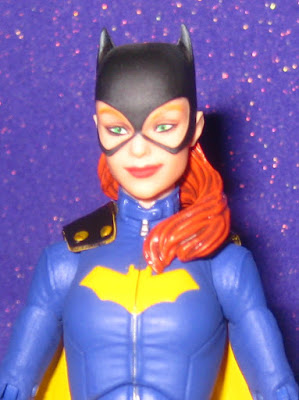 The default head has plenty of stunning detail. Barbara’s cowl is all smooth lines and pointy ears. It appears to be more of a helmet than a mask, which is appropriate. The eye openings are nice and huge and are sculpt and not just paint. The eyebrows are just paint, but they’re painted expertly enough to look great rather than just being blotted on like lesser companies tend to do. The eyes are tremendously detailed from the irises to the lashes.

The actual sculpt of the face is almost impish. This Batgirl’s ears have always been slightly prominent and that is reflected here. The nose and mouth both have distinct character to them, with the latter showing a bit of a cocky smile.

Batgirl’s hair comes out from underneath her cowl in the way we’ve always been familiar with, and is red! For some reason red hair seems to be difficult to get right in action figures. Barbara’s has a nicely detailed sculpt and the paint apps give it depth. Also, it’s curled around her shoulder, which is a common look for this version of Batgirl, but was a terrible decision for an action figure. More on that in “Fun”.

This Batgirl’s costume consists of a top that is distinctly a jacket, short gloves, a short cape that is buttoned onto the shoulders of the jacket, tights, and boots that are strongly reminiscent of Doc Martens.

The jacket’s shoulders are sculpted to look like a jacket as opposed to just a form-fitting suit. Surprisingly, this sculpt does not interfere with articulation. There are sculpted seams and folds, as well as zippers and tabs, which are precisely painted. The sculpted Bat symbol on the chest is a thick, bright yellow with no trace of the dark purple beneath. As I’ve mentioned in other toy reviews, yellow is sometimes a tough color to get right as far as the thickness of the paint application goes. And those joints aren’t nearly as apparent in person. The camera is really highlighting them. I mean, they’re there, but not as obtrusive.

The cape is short with nicely defined ridges running down to the pointed ends. The sculpted buttons “fastening” it to the jacket are gold and the lining is a bright yellow that matches the other yellow portions of the figure. It’s made of soft plastic and is fairly flexible. It stays put just fine, though it’s going to fall off when you’re switching the heads or posing the figure. Best to leave it off until you’re done. 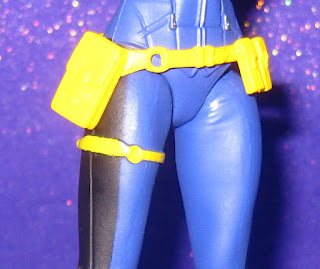 Batgirl’s utility belt is bright yellow soft plastic that is a separate but attached piece. The sculpt is great, with plenty of details on the pouches and clasps, but I feel like it could have used some kind of paint. The solid yellow works for the design, but it looks a little Mattel. The tights are purple with black deco stripes down the sides. The lines are clean and look great. 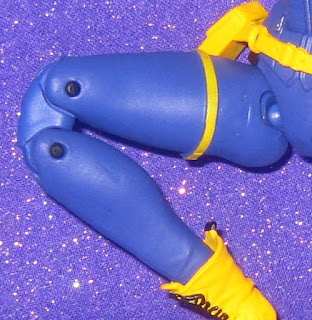 The black pegs in the knee joints, however, do not. These are bad and I’m pretty shocked to see them in this kind of collector-oriented figure. And by “this kind of”, I mean “expensive”. 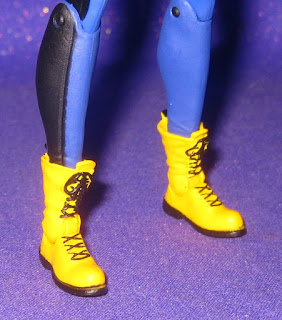 The boots are basically yellow Doc Martens with black laces and soles. They look excellent. There are folds and seams sculpted on and the paint on the laces and soles is applied perfectly – no blotting or splashes. 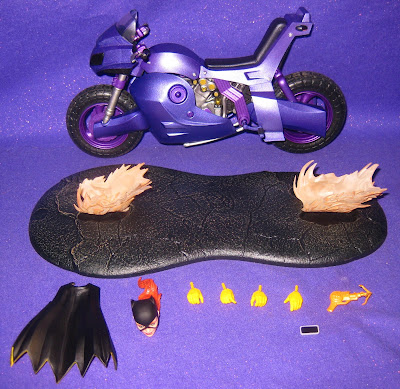 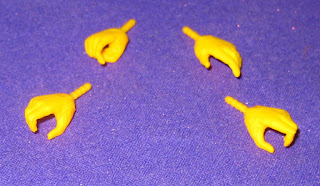 The hands are sculpted to interact with the various accessories. They have sturdy pegs, so you don’t have to worry about them breaking too easily. 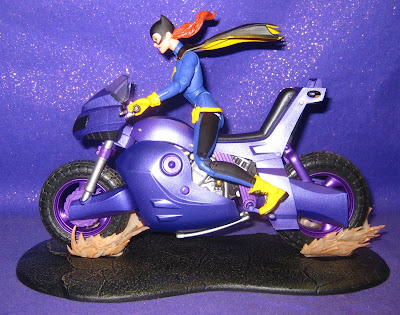 The alternate head and cape swap out for when Batgirl is riding the motorcycle. They look great, except for the fact that the joints on the figure and the way that it sits on the bike never make the angles look quite right. 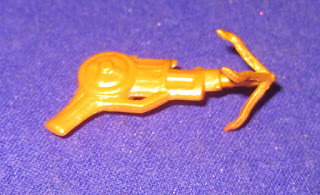 Batgirl’s grapple gun has a great sculpt that is a little different from others we have seen. It’s cast in metallic gold plastic and looks cool, but, like the utility belt, could perhaps use a bit more paint. It isn’t bad, but it’s a little Mattel. 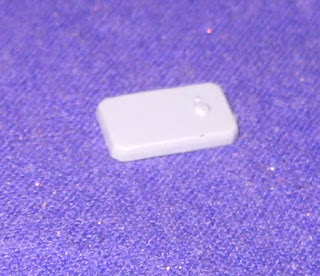 The cellphone is great. It has a black screen on one side and a flash And lens sculpted on the other. It’s simple, but I like it a lot and it’s an essential item for this Batgirl.

The stand for the motorcycle is above and beyond what I would have expected. The asphalt base has a beautiful sculpt and a killer paint app. The smoke effects that the tires plug into rock to either side, allowing you to position the bike leaning either way. This is an ingenious base and I’m really impressed. 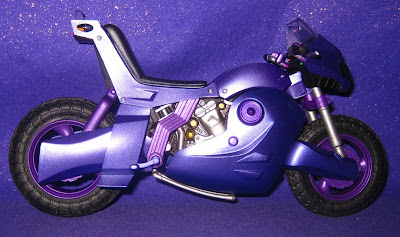 The motorcycle looks amazing and I could spend a whole review on just it. There are two shades of metallic purple paint. The engine is insanely sculpted, detailed, and painted. The tires are rubber with dirt deco that looks great. The windscreen is translucent purple plastic. All of the signal lights are painted brightly and look great. It doesn’t have a kickstand, though, which means that it can’t stand without the base. 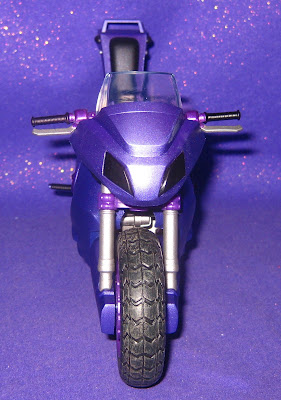 That was a little disappointing since the base has the smoke things built in that don’t make sense if the bike is supposed to be stopped. 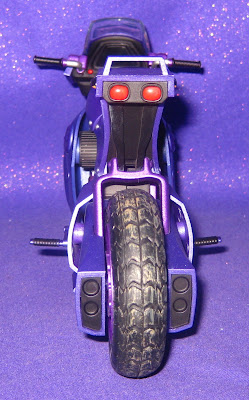 This thing is truly a work of art – like I said, it could almost get its own review. But it didn’t, and since it is made to go with this Batgirl I have to say that it looks way too big to me. 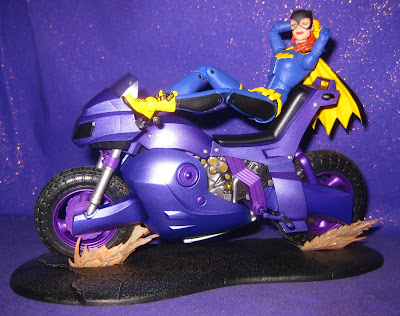 It almost seems to be scaled for larger 6” figures, or even DCC’s regular 7” figures. Batgirl just doesn’t look quite right riding it. The figure can’t even stand astride the bike, which is a natural pose for any rider. 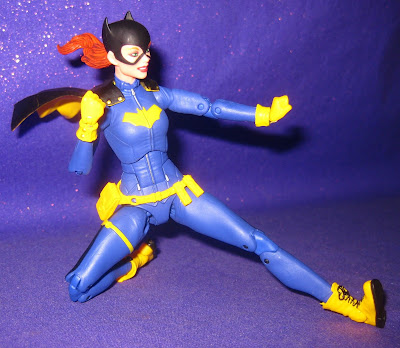 Batgirl has tons of joints:

Since the points I made about the Deadman figure also apply to Batgirl, here they are again:

The hair design on the default head is a problem. It prevents movement in most directions. It looks great, but nullifies the pretty good neck joint. The “riding” head is obviously much better, but also has hair sticking straight out of the back. I wish there was some kind of middle ground. 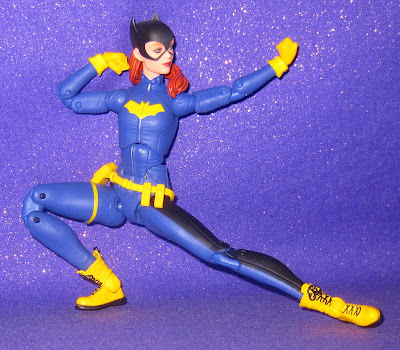 Like the Harley figure, I was surprised at the range of the upper abdominal joint. Unlike Harley and the other figures, I had to work on the lower abdomen to move it.

The hips work better than they look. Some kind of swivel somewhere on the leg would be nice, but I get that it would mess up the aesthetics. I respect that DCC are giving us all the joints they can without making these look totally janky like some import figures do.

The accessories are fun, as are the interchangeable parts, but the oversized bike robs me of a lot of the fun I should be having playing with this set. I don’t know if it’s supposed to be that way or if somehow a giant bike just made it past all of the QC and got produced, but it stinks. 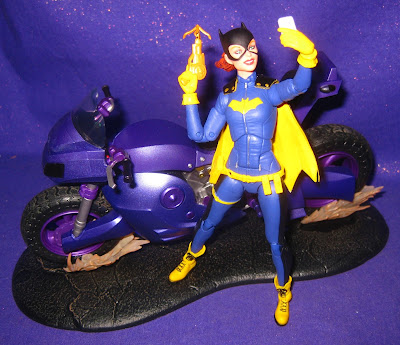 I hate to have found so many faults with this set. Not just because it was so pricey, but because I genuinely love this version of Batgirl and was excited for a great-looking figure and bike. There are still some high points, and I’ll put it on the shelf standing next to the motorcycle, but I’m not thrilled with it. 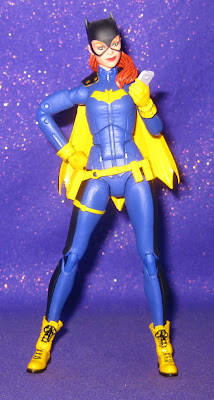 If you don’t mind huge motorbikes, you can help out Needless Things and buy one of these sets from Amazon!: