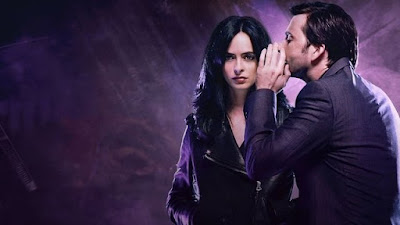 Since I started the Needless Things Podcast the frequency of my commentary and speculation pieces has been dwindling. I enjoy talking a lot more than I enjoy writing and I enjoy conversation more than I enjoy tossing lengthy essays out into an unresponsive void.
Plus, now that I have paying supporters on SupportPhantom.com (few though they may be) I feel a little more obligated to post stuff there when I am taken with the desire to write.
But every once in a while I still get the itch to post something here that’s a little broader and more interesting than a toy review. Which is why I’m here today.

I’ve already written about Marvel Comics, the Marvel Cinematic Universe, Agents of SHIELD (which surprised me by getting its own post), and Daredevil.

Netflix’s second Marvel Cinematic Universe show ended up being my favorite. Perhaps because I didn’t have any expectations attached, but mostly I think it’s because it was simply a fantastic season with tremendous characters.

We were introduced to the primary characters of Jessica Jones, Luke Cage, Patricia Walker, and Kevin Thompson – known as Kilgrave.

Jessica very quickly became one of my favorite MCU characters. Not because she had cool powers or snappy jokes, but because she had weight. From the first shot of Krysten Ritter you can tell that Jones is a damaged, troubled individual. I wanted to know what had happened, but more importantly I wanted to know how she kept going. And I wanted to see her keep going. From the start I was rooting for her. Some of this was great writing, most of it was Ritter’s performance and natural vulnerability with a coat of steel on top.

Kevin Thompson – whose chosen moniker of “Kilgrave” is rightly mocked throughout – is a monster. He is a liar, a sociopath, and sees himself as the victim of every scenario and absolutely entitled to commit all of the atrocities the show reveals. Is he an allegory for the “privileged male”? Maybe. I certainly see signs that much of society views males in general to be as inherently vile as Kilgrave. But I don’t get into political hysteria here, so I’ll just say that he is easily the most monstrous and disturbing creation to come out of the MCU.

It’s clear that David Tennant revels in portraying villainy. We saw it in Harry Potter and the Goblet of Fire, though Barty Crouch, Jr. was nowhere near as sinister as Kilgrave. In this role, all remnants of the beloved Doctor are gone. It’s actually quite amazing to see that face and not feel that loving fandom that I did for so many years. Intellectually I know that this is the same guy, but while I’m watching Kilgrave I am not thinking about the Doctor at all. I know that’s called ACTING!, but it’s thoroughly impressive here. I’ve seen plenty of actors play villains and heroes in my life, but Tennant’s turn here reminds me of the first time I saw Christopher Reeve in a movie called Deathtrap – not so much for villainy, but in that there was no sign of the Man of Steel. I was quite young when I saw it and it made a huge impact on my understanding of acting.

Side Note: If you haven’t seen Deathtrap, do yourself a favor and get on that. And don’t read anything about it. It stars Reeve, Michael Caine, and Dyan Cannon and is fantastic. 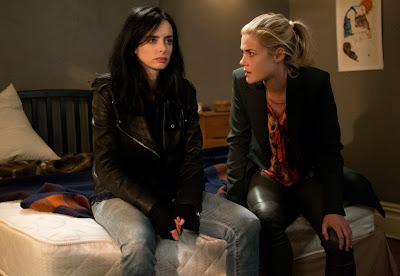 If you’re like me, you can’t wait to see what happens with Trish Walker and are dying to see Rachael Taylor in the MCU approximation of the Hellcat costume. I mean, she’s earned it, right? While Taylor has her own issues, she is the yang to Jessica’s yin; the bright light of the show. Without her performance, Jessica Jones could have gotten bogged down with all of these tragic, damaged characters. Every time she was on screen she was a delight.
That’s not to say that Trish didn’t have her own baggage. As with the rest of the characters, once they had you hooked, the show starts to show you their insides. And Trish’s past is tough. 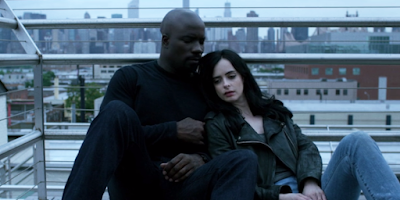 Finally, Mike Colter was instantly likeable as Luke Cage. He was charming and charismatic, but had his own hint of personal tragedy that played nicely off of Ritter’s wrecked character. I’ll stop there since he was only in seven of the thirteen episodes and also because I need to save something for my Luke Cage piece.

I feel like that quartet were the main cast, though the show obviously needed many more supporting characters to tell the powerful story that it did.

Carrie-Ann Moss gave a powerful performance as the near-sociopathic Jeri Hogarth. I found this character fascinating because she had so many opportunities to do the right thing, and always made the most selfish decision possible, right up until Jessica had her by the balls at the very end and she had no choice but to do some good.

I know Will Simpson as Nuke (Frank Simpson) from Wolverine: Origins rather than as a foe of Daredevil, which is how he originally appeared in the comics. Jessica Jones’ take on the character is very different, though the endgame is satisfyingly familiar to comic readers. I thought that Wil Traval did a fantastic job. If I had realized his character was supposed to be Nuke from the start I might have been disappointed, but the narrative made him very sympathetic and relatable before he turned into Captain Red Pill Crazypants. I look forward to seeing more of this character in future Marvel Netflix shows.

The victim that sets Jones on Kilgrave’s trail is Hope Shlottman, who is played with powerful desperation by Erin Moriarty. She’s the one pure character on the whole show and almost every scene she is in is gut wrenching thanks to the circumstances she has been put in.
Moriarty fairly radiates innocence, so when she is forced to commit heinous acts and then later chooses the final act of defiance against Kilgrave, it’s truly terrible to have to watch.
Finally, Eka Darville plays Malcolm, who finds a sort of beautiful redemption over the course of the season. He transforms from a junkie who seems to be victim fodder into a courageous ally. Darville is immediately likeable despite his characters’ addictions, so his arc was one of the most rewarding on the show. He will be back in The Defenders as Jessica’s assistant.

Like many of Marvel’s movies and TV shows this one starts in the middle of a story, slowly unpacking the narrative in both directions as the episodes progress. Before I wrote this piece I sat down to watch the first episode again, just to get a feel for the tone and refresh myself on seeing the characters in action. Two days later I had watched the entire season again. I found it much more compelling the second time through. The first time I kept waiting for the Kilgrave story to be tied up, not knowing that it was the arc for the whole season and not quite getting why he was worthy of being the Big Bad of all thirteen episodes.

The second time through I did have that knowledge and it made the return all the more satisfying. This time I knew the overall series of events and was able to enjoy the small things more because I didn’t have to think about what was going to happen and why. I had a much greater appreciation for Kilgrave’s evil and for the resilience of our heroes in the face of it.

I was able to appreciate and pick up on the twists and turns of Kilgrave’s character arc. How, for a short while, the show seems to be building sympathy for him. And then turns it around to reveal that he truly is a monster. And also how easy he is to underestimate. We think “mind control” and, as humans, we think small. But the writers for the show orchestrated some ingenious mechanisms to demonstrate just how much of a menace such a talent in the wrong hands could be.

I think that the Luke Cage swerve in episode 12 is one of the best turns in recent television history. It got me again the second time because Kilgrave’s powers had been established so well and the show was smart enough to have Jessica double down on the “12 hours away from Kilgrave” idea to the point where we, as the viewers, accepted it rather than thinking about the villain expanding his powers. Plus, the story of Cage’s interaction with Kilgrave was told in such a way that we believed the way that it was presented.

Then, when the duo encountered Tennant’s character, the world fell apart.

Jessica had finally had something in Luke that she had never had before  someone she could trust and not have to worry about. A powered individual that, yes, might be turned by Kilgrave, but that couldn’t end up harmed himself. It allowed her to focus on the problem at hand in a way she had never been able to before and we got a glimpse of a slightly less dysfunctional heroine right before the rug got pulled out from under her and Cage attacked.

The scene was made even more brutal by Luke’s dialogue about not forgiving Jessica for killing his wife. In the moment, we really didn’t know whether that was him or Kilgrave and it was much more devastating than the violence that was being dished out. 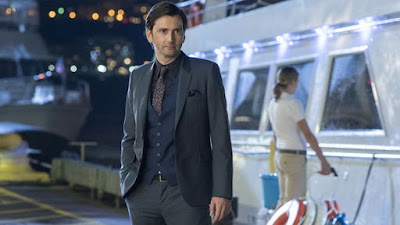 Kilgrave’s death also had a lot more weight the second time. On first viewing, my wife and I both sort of had a “That’s it?” feeling. But this time, being able to take in all of the nuance and having a much better understanding of the events, the death felt powerful and satisfying.

If you haven’t yet, I highly recommend you give Jessica Jones a second viewing. Not only did I appreciate it in a completely different (and more satisfying) way, I now want to go back and watch the other shows again just to see if I get the same out of them.

If you enjoy Jessica Jones, binging TV shows, or Needless Things, you might enjoy SupportPhantom.com.
Posted by Phantom Troublemaker at 11:00:00 AM