Once More with Buffy 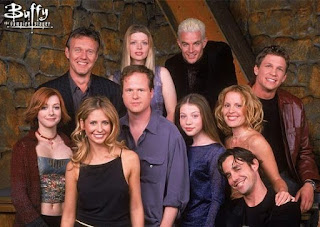 I hadn't planned on writing more about Buffy, but when Phantom asked me for an extra post, and I didn't want to move up my next post I thought it might be a good time to go more in-depth on a few of my favorite episodes. I was challenged on a few of my top picks so had planned on the top 5, but once I got into it I quickly realized I had too much to say about them to get that far. Hell, I couldn't even get the top 3 into less that several thousand words. Not without making this unbearably long, at least. So here are a few notables that didn't quite make the cut, but are still worth mentioning as well as a longer piece of why my favorite is indeed my favorite. Hint: it's Doublemeat Palace. Just making sure you were paying attention. That is probably my least favorite Buffy ever. So here's 5 more good ones:

School Hard
“oh please. If every vampire who said he was at the crucifixion was actually there it would've been like Woodstock” 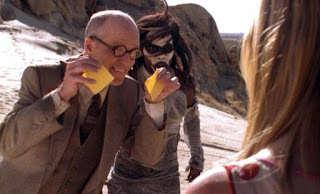 Restless
“I wear the cheese, it does not wear me”

And now that I got that last quote out of the way (I really love the guy with the cheese in Restless) we can finally talk more about my favorite: 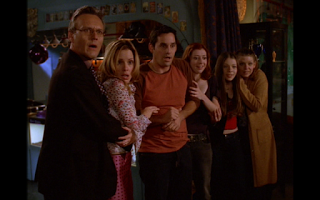 Everyone is still reeling from the aftermath of the things that came out during Once More with Feeling. Willow wants Buffy to stop whining about being magically pulled out of heaven, and back to the land of the living (and constantly fighting). She also wants Tara to forget that they're arguing about Willow's overuse of magic. So naturally Willow decides that more magic is the solution to everything. She agrees to Tara's no magic for a week ruling, and then immediately breaks it by casting a forgetfulness spell that is supposed to make it all better. Somehow. Giles tells Buffy that he's going back to England because he's “standing in the way” of her growing up, and taking charge of her life. Meanwhile, Spike is on the run from a literal loan shark (a demon with a very shark-like head) because he can't pay him the kittens he owes him. The demon underworld bets using kittens. I guess it's less evil than using puppies, but just barely. The gang all winds up in the magic shop just in time for Willow's spell to kick in, and knock them all out. When they wake up no one knows who they are anymore. Giles and Spike decide that they must be father and son since they're both British, Willow is wearing Xander's jacket so she believes that they're dating, and Buffy doesn't know who she is so she names herself Joan. The loan shark shows up with his vampire goon squad, and everyone freaks out because they don't know that demons are real. Wait, this is turning into more of synopsis than a critique or a reason to choose this episode over all the many others. 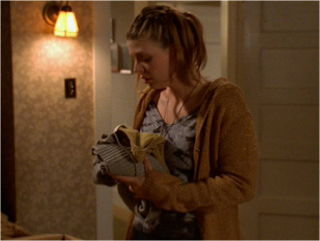 What's great about this episode (besides Tara's hair. Just kidding, it's awful) is how the characters react to their amnesia. Spike was in disguise, and since his jacket says “made with care for Randy” he thinks his name is Randy Giles. The dialogue between Giles, Spike, and Anya (who, as part owner of the magic shop is assumed to be Giles's inappropriately aged girlfriend) is hilarious. As is Anya thinking that she can fix them all with magic, but just ends up summoning lots of bunnies. And if you remember Fear, Itself she finds bunnies terrifying. 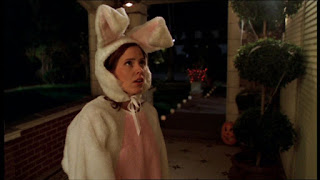 I'll admit that I wasn't a big fan of Willow going gay at first. I loved her and Oz together, and it seemed kind of after school special of them to make her gay out of nowhere. Given that after Tara's death Willow moves on to potential slayer Kennedy I'll take the Tara and Willow combo any day. But yeah, eventually they grew on me as a couple. Even though it kind of tore me up when Oz came back after it was too late. So when Tara walks out on Willow at the end of the episode I was pretty upset, and Dawn acting like a self-centered little brat about it didn't help either. Since Willow goes in to a downward magic spiral after this you can't help but wonder if Tara did the right thing. The “relationship” between Buffy and Spike is explored further, and even though she knows that she doesn't care about him, but still can't stop herself from making out with him since he's the only one who doesn't make her feel weird about her return from the dead. Plus there's the funny when Randy realizes he's a vampire, but is fighting other vampires.
Spike: I'm a vampire with a soul.
Buffy: A vampire with a soul? Oh my god, how lame is that?
Anything we can do to keep making fun of Angel is totally okay with me. But she's right when she says “if I would just stop saving his life it would simple things up so much”. It sure would help take the bummer out of the later parts of season 6, and a whole lot of crazy out of season 7. We'd miss some good stuff too though so I'll stick with team Spuffy. Anything is better than Angel. Even Riley. 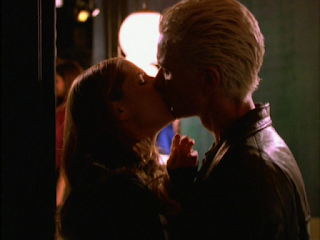 And in the end everyone is left far worse off than they were before. Giles is resolved and resigned to his departure, Spike approaches Buffy at The Bronze looking all earnest (you gotta feel for the guy. He really thinks he loves Buffy), and Willow cries pathetically on the bathroom floor while Tara packs her things. Since this is all pretty much her fault is hard to feel too bad for her, but it's still sad. And thus begins the series decent into total angst. Where anyone can die, and everyone can be evil. How could Joss Whedon make Nathan Fillion a bad guy? Why Joss, why?