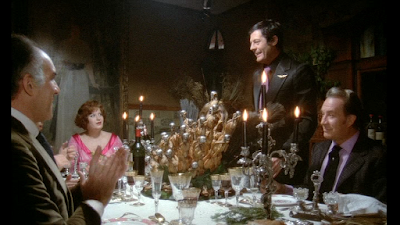 This reminds me of nights at Golden Corral or a dumpy Chinese buffet where I become aware of the unhealthy physical appearance of other patrons. I'm not one to frequent buffets, but every time I do I tell myself I'll never go back. It's a great idea in theory, you have plenty of options and the permission to try as much of anything as you'd like. Acting on the initial impulse of trying everything and getting your money's worth leads to some negative side effects though. I usually find myself in a state of extreme discomfort that last at least an hour. Stomach is bloated and cramped and that's only after roughly 3 plates. I've seen people get multiple plates in one trip to reduce how many times they have to get their fat asses up and walk back, cause it's so far ya know. The buffet is the last place some of these people need to be. Their love of food and over indulgence of it is surely leading to an early demise. This is relevant to what's ahead. So if you're curious as to why I'm talking Golden Corral in Devlin's Domain, proceed.

For the record, I'm a quality over quantity type of guy. I'd rather pay for a top notch meal with a smaller portion than all you can eat mediocre food that a bunch of bastard children have been sticking their fingers in. If I was in a financial position to eat like a king though, I may gain a lot of weight. Make no mistake,  I love great food and writing about this is making my stomach rumble. A few people out there are fortunate enough to either be a chef or own a chef and get to dine on the best food in the world on a regular basis. These are the people that I'll be focusing on today.

There's a big disconnect between the average person and the people in upper class society. Fine dining is just another night out for them and they'll likely never know the Ramen Noodle struggles that a lot of us have experienced. One may assume they have a care free lifestyle, but in a lot of cases that is far from true. Once acclimated to this type of lifestyle, many can't bear to deal with anything less. Their struggle is maintaining their lifestyle and public image.

This week's film is about a few things. It's about male comradery and friendship, it's about the tragically rich, it's about over indulgence, and it's about self destruction. This film shows that even though thousands are dying all over the world from not having enough, there are others out there who are dying from having too much. The English translation is The Great Feast, which is exactly what this is. This journey of gastral annihilation is known better by it's original title:

Filmed in 1973 by Marco Ferreri, La Grande Bouffe is one of very few films to score the notorious NC-17 rating. The rating was issued for "explicit sexual content", which I am still trying to find. The men in this film do two things and that is eat and fuck. The sexual stuff wasn't all that graphic so there must have been some real tight asses in charge of passing judgement on this one. I really see no reason why this got anything more than an R rating. 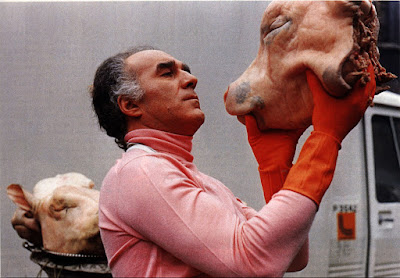 Our four main characters go by their real names in this: Marcello, Michel, Phillipe, and Ugo. They are a pilot, a cook, a television executive, and a judge. The four of them decide that they are ready to end their lives due to whatever unhappiness they share. They head out to a country mansion where they get several trucks full of meats and vegetables delivered. Ugo is the chef and the others agree to assist in meal prep. The meal prep and consumption will be constant, because the plan is to eat themselves to death over the course of several weeks. 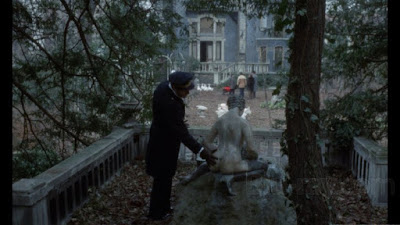 After a few large meals Marcello can no longer stand the isolation. He's a sex addict and not one for a sausage party. In order to satisfy him and keep him from leaving they decide to hire some prostitutes and throw a party. Before the party a group of school kids and their teacher ask to view a tree on the property and are given a tour of the whole house. The teacher, Andrea, looks like she could put away some groceries and doesn't turn down the food they offer her. Phillipe is very attracted to her and she gets invited to the party that night even though Phillipe suspects she may be uncomfortable around the loose women. 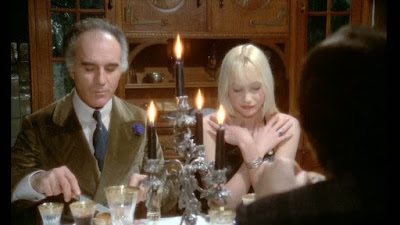 The women arrive for the dinner party and Marcello spares not a second before he engages one of them and sports her panties as an eyepatch. The others have conversation while shoveling food down their throats while Marcello enjoys some food and coitus. For some reason Marcello is the only one really interested in fornicating with the prostitutes. Seems like if you're planning to die anyway, who cares what kind of genital funk you might catch. They still manage to have a good time throwing food on their naked bodies and feeding each other. 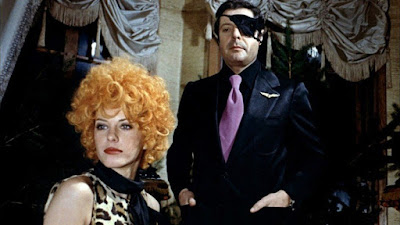 The longer the shenanigans go on the more comfortable Andrea gets with the situation. She seemed like she may have been an uptight prude, but she ends up disrobing and messing around with Phillipe. He proposes to her right off the bat, which is weird since he's going to die soon. More debauchery and indulgence occurs over the course of the night and Andrea is revealed to be quite the hedonist like the four men. The difference is the reason for their excess. She loves life while they are on course toward death. 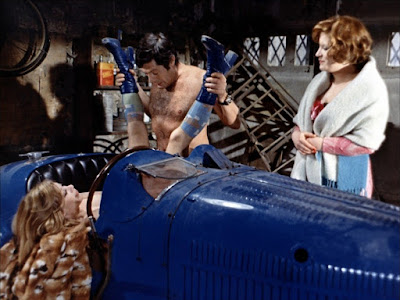 The prostitutes start to become disgusted in the self destructive behavior of the four men. They decide they don't won't any part of it and all of them eventually leave the house. Andrea stays around though as she is smitten with Phillipe and not to mention the free onslaught of gourmet dishes. Michel starts to have stomach ailments from the excessive food consumption and starts cutting muffins like crazy. While clenching his stomach in pain, Andrea decides to mount him hoping the sex will bring some relief. Pretty funny scene watching her straddle him while he's steadily ripping ass and moaning. Some might call this farthouse cinema. 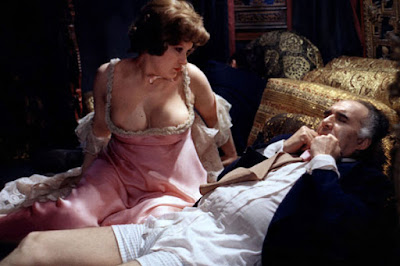 Andrea soon starts sleeping with everybody in the house. This isn't cool with Phillipe, but he deals with it and pursues his baneful goal. Marcello is the main one that becomes obsessed with Andrea. That doesn't last long though, because once a clogged toilet explodes and covers him in liquefied feces he decides to leave the house. He ends up dying in his car and never makes it off the property. The first casualty of binge eating is ironically the one who spent less time eating and more time fucking. 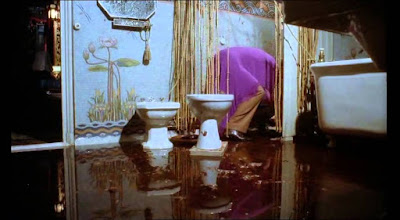 Michel isn't far behind Marcello since he was already in a bad way. He ends up falling out as well. Ugo makes a massive cake to celebrate the lives of their fallen friends, but Phillipe snubs it. Ugo attempts to demolish it by himself and soon after meets his fate. Now that the chef is gone Andrea is tasked to prepare the last meals for Phillipe before his life ends as well. It's lonely being the last one, but he eventually joins his friends in the dirt. 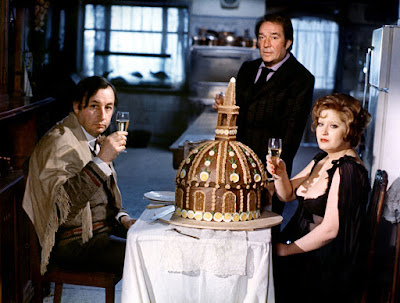 Now I was questioning this whole "eat yourself to death" thing. Seems like your body's defenses would reject any food intake after a certain point. You would eat until you feel sick or you would actually get sick and blow chunks everywhere. I looked into it and apparently there are recorded scenarios where people have eaten until their stomach explodes and they die. The body can handle about 2-3 liters of food comfortably. Once you get to 5 or more liters you're gonna have serious issues. There are only a few people that have a risk of this happening though. They don't have the natural gag reflex that would normally keep food from going down once you've reached max capacity. Very unlikely that all four of these guys would die this way. 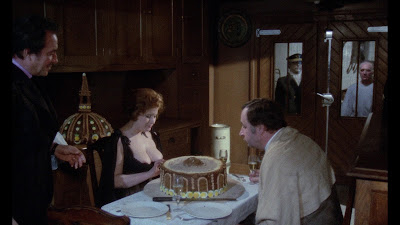 It's not really about what's possible or impossible though. This film is all about the concept and the conditions that led to such a thing. If it wasn't entirely apparent, this is a black comedy. It's not a knee slapper or anything, but it is very entertaining and has some very odd predicaments. IMDB rates it a 7.2 and I'll round it to a 7.5. Definitely recommend this if you're into dark comedies and "explicit sexual content".

That's going to be it for this week in the Domain. I'm hungry now and could go for some Duck L'Orange, but I guess I'll have to settle for Raisin Bran. Come back next time because the weirdness never ends here.

About Me: I have a couple of different aliases, but for this column I will use my middle name. I am Devlin and I currently reside in Atlanta, GA. 33 years of age and still feeling immortal. Former Rockstar, current Pro Wrestler and hell, I'm still a Rockstar at heart. I got my first taste of obscure cinema when I was about 8 years old. My Dad would take us to the video store every weekend to stock up on classic horror films to watch on his projector. They were mostly harmless, PG-rated horror films like the great Universal monster movies. Then one night he rented a movie for himself to watch after we had gone to bed. I was so intrigued by this film that I wasn't allowed to see. I begged and begged and he eventually caved. That night I was exposed to a film unlike anything I had seen before. Ever since that night I wanted to find more films that gave me that same sensation. I wanted to feel shock and disgust. I found my place in the Horror aisle. The film I watched was Faces of Death. Thanks Dad.www.facebook.com/DevlinValek