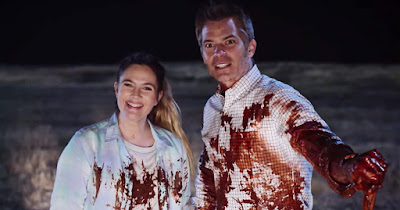 It’s not often that I’m inspired to write anything about a new television show. Typically I need to have experienced a full season or more to have formulated thoughts or even the most basic kind of fandom. Sure, I’ve loved shows like Westworld or Game of Thrones right off the bat, but it’s very rare for a show to click with me in the way that I feel like it’s just for me.

Of course, I have watched the entire first season of Santa Clarita Diet now thanks to Netflix’s model, and I can’t wait to watch it again.

Here’s what I knew about Santa Clarita Diet going in:

That’s it. And that was enough recommendation for me. Now you guys have the benefit of those facts and my highest recommendation. If you trust my opinions and can handle some outrageously gory practical effects – like, Dead Alive gory, almost – then you should just go and watch Santa Clarita Diet right now.

If you need a little more, here are some spoiler-free thoughts on the show. I might mention some casting surprises, but I won’t give away any plot points.

If you doubt the concept a bit, let me assure you that Drew Barrymore’s character, Sheila Hammond, does have to eat human flesh. And isn’t really a zombie. Her husband, Joel Hammond, is played by the delightful Timothy Olyphant.

If you’re around my age, male or female, you are probably in love with Drew Barrymore to some degree. We have grown up with her. We’ve seen her make good decisions and bad and have all rooted for her regardless of what her next project might be. Her acting career has covered just about every genre there is and no matter the quality of the project, she has always brought her magic, both in front of and behind the camera.

Before this turns into a post about Barrymore – perhaps the subject of a future podcast episode – let me just say that not only does she not disappoint in this show, she is at the top of her game. You won’t see it at first, but by the end of episode 1 you will. And as the series goes on, you will marvel at just how compelling and human she is while still delivering gut-busting one-liners and living a nightmare.

I’ve been watching Timothy Olyphant for years in supporting roles, but I truly discovered him in Deadwood and Justified, both of which I started watching right around the same time. While Seth Bullock and Rayland Givens are very different characters, they shared a certain humor and… scariness. Olyphant can go from charming to terrifying in a second.

Santa Clarita Diet gives viewers the opportunity to see Olyphant play a character that relies much more on humor. Barrymore is wonderful, but without Olyphant’s Joel the show would not be the same. His reactions to his wife’s situation and his resolve to make their lives work is fantastic and just as critical to the show’s success as Barrymore’s affliction.

Joel and Sheila have a teenage daughter, Abby, played by Liv Hewson. It’s pretty easy – and standard – for a kid to be the drag of a show. All too often creators mistake snarky for clever and bitchy for independent. I feel like portraying a likable but real teenager has to be one of the hardest gigs for writers and actors. But Abby Hammond is a fully developed and compelling character. She’s not the kid that the stars have to deal with, she is an equal. This show is about a family of three, not two parents and their kid.

At its heart, Santa Clarita Diet is a show about a family dealing with adversity, but the magic is that the family genuinely love and respect each other. While the relationships aren’t sugar-coated, they aren’t the sniping, derisive interactions that we see so much of today.
These are genuine people dealing with a horrifying problem. They’re just a lot funnier than you and me.

The supporting cast is made up almost entirely of “Oh, hey – it’s _________!” actors. Some are names we all know, some are familiar faces that we’ll know by heart in a few years. I’m not going to list them all because there are some delightful surprises and I want you to enjoy those moments of recognition as much as I did, but there are a few regulars that I want to highlight.

Mary Elizabeth Ellis and Ricardo Chavira portray the Hammond’s neighbors, Lisa and Dan Palmer. Their relationship unfolds in a very entertaining way over the course of the season. Both actors are fantastic in their roles and it’s especially rewarding seeing Ellis as such a departure from The Waitress on It’s Always Sunny.

Skyler Gisondo is Lisa’s son and Dan’s stepson, Eric. I am confident in saying that this guy is going to have a long and memorable career. Like Liv Hewson’s Abby, his character transcends the tropes you expect. Eric could have easily been the shallow, two-dimensional stereotype of a geek portrayed by certain terrible, awful sitcoms, but instead he is a charming character with depth that rises to the demand of a strong supporting role.

The Hammond’s other next-door neighbors, Rick and Alondra, don’t have quite as much screen time – denoted by the fact that they do not, in fact, have last names – but they still manage some truly great moments of comedy and pathos. Richard T. Jones and Joy Osmanski are delightful every time they’re on screen and I look forward to hopefully seeing more of their characters next season.

Now we need to talk about the gore.

WARNING – there is gore. LOTS of it.

After all of that gushing about the cast, you might have forgotten that this is a show about a mom that eats people. Naturally, that involves an entirely different kind of gushing.

After years of being a horror fan, I am somewhat desensitized to fictional gore. I have seen shit that would turn you white, so I often forget that a large percentage of the population isn’t prepared to see things like disembowelment and impaling depicted in as graphic a manner as Santa Clarita Diet brings.

You guys – it brings it. And as far as I can tell, it is mostly practical. There were a couple of big splatter moments where I thought I might detect some CGI trickery – or at least enhancement – but it was given away more by the actors’ behavior than the visuals. And that’s not a knock on the actors. You’ll understand when you see the show.

Santa Clarita Diet is just as gruesome as it is funny. One moment I was laughing so hard I was crying, the next I – the hardened gorehound – was cringing at some onscreen nastiness. It’s an amazing mix of over-the-top splatter and grounded viscera. Some moments are outrageous, but the ones that really got to me were the small, more subtle instances of carnage. I can’t go into more detail without giving too much away.

Watch this show. If me and the missus didn’t have jobs, a kid, and responsibilities we would have watched all ten episodes in a night. As it is we watched six one night, two the next, and the final two last Wednesday. The only bad thing I have to say is that the season ends too abruptly. It’s meant as a cliffhanger, but feels more like when a show just gets cancelled and never airs the rest of the season. It could have been much more artfully done, especially given the longer than usual amount of time that passes between seasons with Netflix shows.

Having said that, I have no doubt we’ll get a second season. This show is excellent and seems to be getting a lot of praise, though that praise is sometimes tempered with “too much gore”!

I feel like those people are missing the point.

If you enjoy gore, binging TV shows, or Needless Things, you might enjoy SupportPhantom.com.
Posted by Phantom Troublemaker at 11:00:00 AM